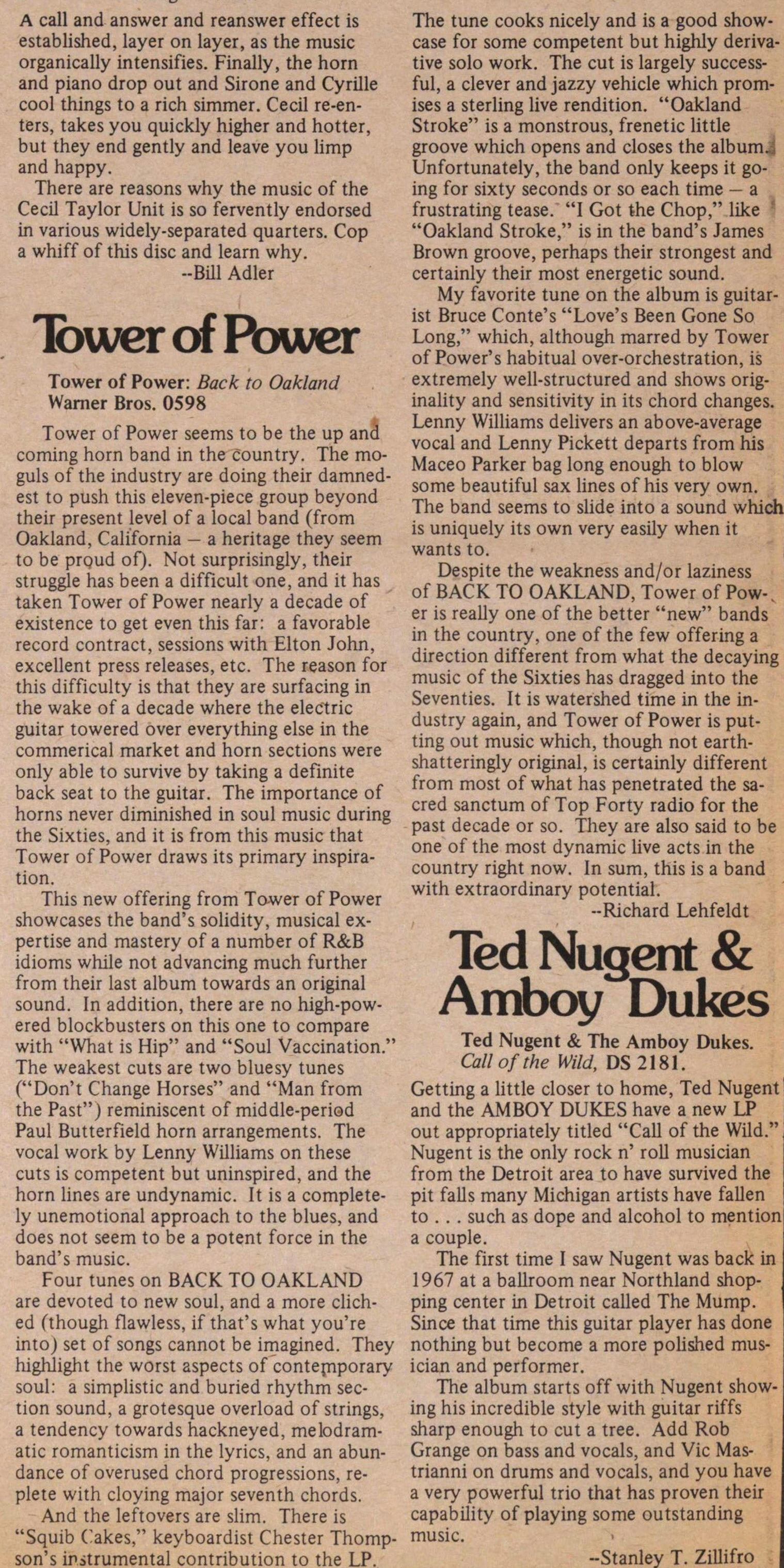 Tower of Power: Back to Oakland Warner Bros. 0598

Tower of Power seems to be the up and coming horn band in the country. The moguls of the industry are doing their damnedest to push this eleven-piece group beyond their present level of a local band (from Oakland, California - a heritage they seem to be proud of). Not surprisingly, their struggle has been a difficult one, and it has taken Tower of Power nearly a decade of existence to get even this far: a favorable record contract, sessions with Elton John, excellent press releases, etc. The reason for this difficulty is that they are surfacing in the wake of a decade where the electric guitar towered over everything else in the commerical market and horn sections were only able to survive by taking a definite back seat to the guitar. The importance of horns never diminished in soul music during the Sixties, and it is from this music that Tower of Power draws its primary inspiration.

This new offering from Tower of Power showcases the band's solidity, musical expertise and mastery of a number of R&B idioms while not advancing much further from their last album towards an original sound. In addition, there are no high-powered blockbusters on this one to compare with "What is Hip" and "Soul Vaccination." The weakest cuts are two bluesy tunes ("Don't Change Horses" and "Man from the Past") reminiscent of middle-period Paul Butterfield horn arrangements. The vocal work by Lenny Williams on these cuts is competent but uninspired, and the horn lines are undynamic. It is a completely unemotional approach to the blues, and does not seem to be a potent force in the band's music.

Four tunes on BACK TO OAKLAND are devoted to new soul, and a more cliched (though flawless, if that's what you're into) set of songs cannot be imagined. They highlight the worst aspects of contemporary soul: a simplistic and buried rhythm section sound, a grotesque overload of strings, a tendency towards hackneyed, melodramatic romanticism in the lyrics, and an abundance of overused chord progressions, replete with cloying major seventh chords.

And the leftovers are slim. There is "Squib Cakes," keyboardist Chester Thompson's instrumental contribution to the LP. The tune cooks nicely and is a good showcase for some competent but highly derivative solo work. The cut is largely successful, a clever and jazzy vehicle which promises a sterling live rendition. "Oakland Stroke" is a monstrous, frenetic little groove which opens and closes the album. Unfortunately, the band only keeps it going for sixty seconds or so each time - a frustrating tease. "I Got the Chop," like "Oakland Stroke," is in the band's James Brown groove, perhaps their strongest and certainly their most energetic sound.

My favorite tune on the album is guitarist Bruce Conte's "Love's Been Gone So Long," which, although marred by Tower of Power' s habitual over-orchestration, is extremely well-structured and shows originality and sensitivity in its chord changes. Lenny Williams delivers an above-average vocal and Lenny Pickett departs from his Maceo Parker bag long enough to blow some beautiful sax lines of his very own. The band seems to slide into a sound which is uniquely its own very easily when it wants to.

Despite the weakness and/or laziness of BACK TO OAKLAND, Tower of . er is really one of the better "new" bands in the country, one of the few offering a direction different from what the decaying music of the Sixties has dragged into the Seventies. It is watershed time in the industry again, and Tower of Power is putting out music which, though not earthshatteringly original, is certainly different from most of what has penetrated the sacred sanctum of Top Forty radio for the past decade or so. They are also said to be one of the most dynamic live acts in the country right now. In sum, this is a band with extraordinary potential.