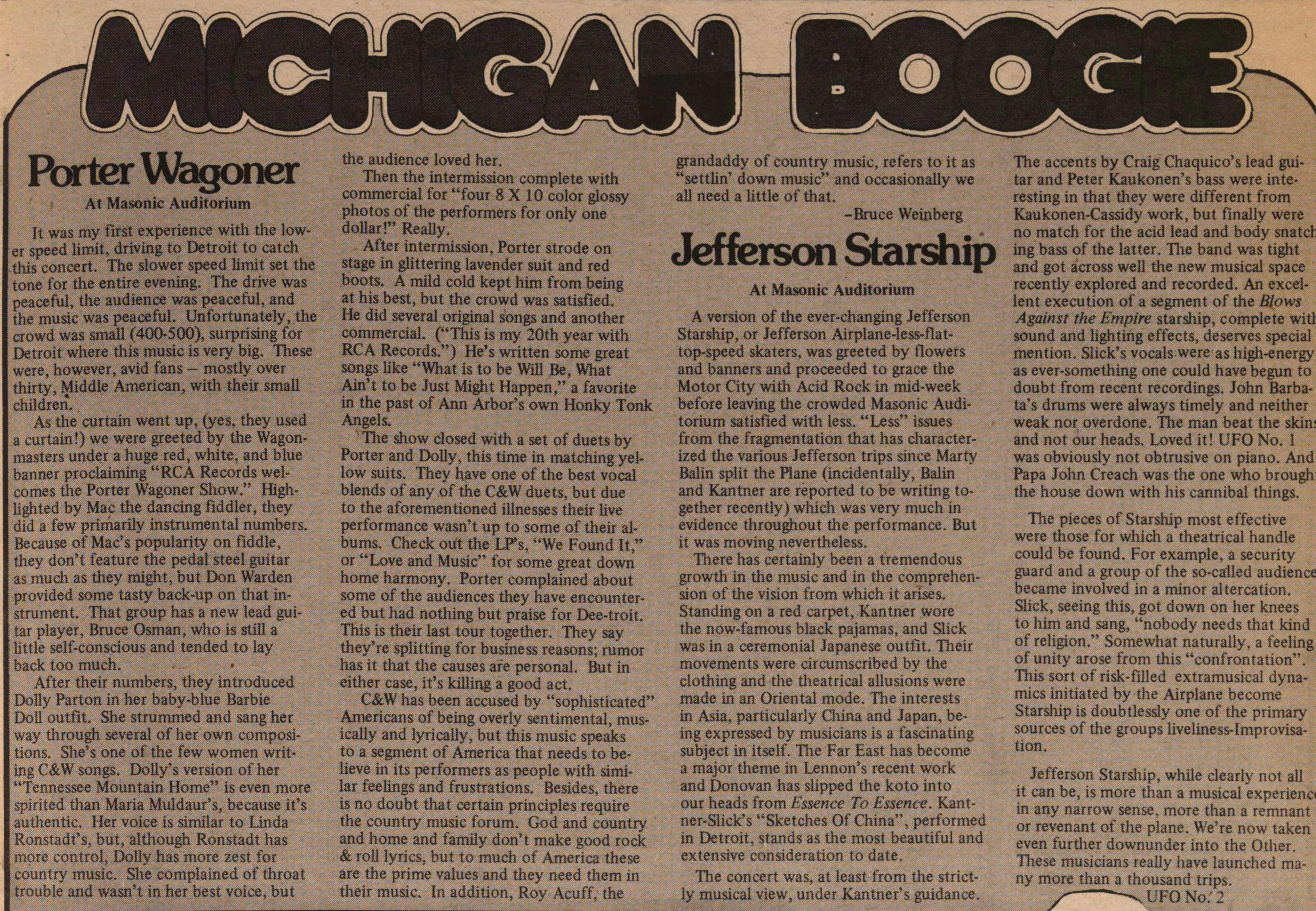 It was my first experience with the lower speed limit, driving to Detroit to catch this concert. The slower speed limit set the tone for the entire evening. The drive was peaceful, the audience was peaceful, and the music was peaceful. Unfortunately, the crowd was small (400-500), surprising for Detroit where this music is very big. These were, however, avid fans - mostly over thirty, Middle American, with their small children.

As the curtain went up, (yes, they used a curtain!) we were greeted by the Wagon-masters under a huge red, white, and blue banner proclaiming "RCA Records welcomes the Porter Wagoner Show." Highlighted by Mac the dancing fiddler, they did a few primarily instrumental numbers. Because of Mac's popularity on fiddle, they don't feature the pedal steel guitar as much as they might, but Don Warden provided some tasty back-up on that instrument. That group has a new lead guitar player, Bruce Osman, who is still a little self-conscious and tended to lay back too much.

After their numbers, they introduced Dolly Parton in her baby-blue Barbie Doll outfit. She strummed and sang her way through several of her own compositions. She's one of the few women writing C&W songs. Dolly's version of her "Tennessee Mountain Home" is even more spirited than Maria Muldaur's, because it's authentic. Her voice is similar to Linda Ronstadt's, but, although Ronstadt has more control, Dolly has more zest for country music. She complained of throat trouble and wasn't in her best voice, but the audience loved her.

Then the intermission complete with commercial for "four 8X10 color glossy photos of the performers for only one dollar!" Really.

After intermission, Porter strode on stage in glittering lavender suit and red boots. A mild cold kept him from being at his best, but the crowd was satisfied. He did several original songs and another commercial. ("This is my 20th year with RCA Records.") He's written some great songs like "What is to be Will Be, What Ain't to be Just Might Happen," a favorite in the past of Ann Arbor's own Honky Tonk Angels.

The show closed with a set of duets by Porter and Dolly, this time in matching yellow suits. They have one of the best vocal blends of any of the C&W duets, but due to the aforementioned illnesses their live performance wasn't up to some of their albums. Check out the LPs, "We Found It," or "Love and Music" for some great down home harmony. Porter complained about some of the audiences they have encountered but had nothing but praise for Dee-troit. This is their last tour together. They say they're splitting for business reasons; rumor has it that the causes are personal. But in either case, it's killing a good act.

C&W has been accused by "sophisticated" Americans of being overly sentimental, musically and lyrically, but this music speaks to a segment of America that needs to believe in its performers as people with similar feelings and frustrations. Besides, there is no doubt that certain principles require the country music forum. God and country and home and family don't make good rock & roll lyrics, but to much of America these are the prime values and they need them in their music. In addition, Roy Acuff, the grandaddy of country music, refers to it as "settlin' down music" and occasionally we all need a little of that.