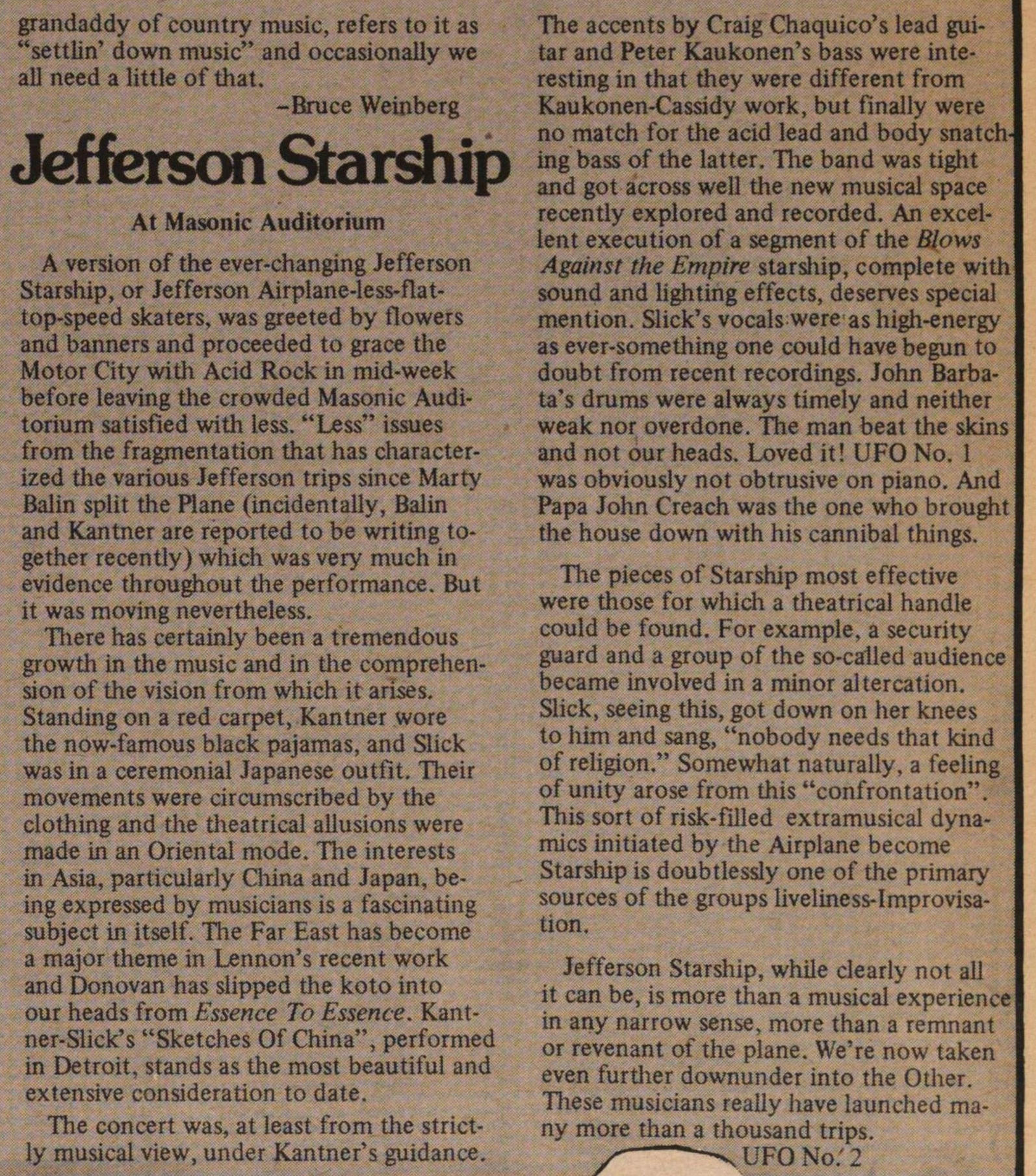 A version of the ever-changing Jefferson Starship, or Jefferson Airplane-less-flattop-speed skaters, was greeted by flowers and banners and proceeded to grace the Motor City with Acid Rock in mid-week before leaving the crowded Masonic Auditorium satisfied with less. “Less” issues from the fragmentation that has characterized the various Jefferson trips since Marty Balin split the Plane (incidentally, Balin and Kantner are reported to be writing together recently) which was very much in evidence throughout the performance. But it was moving nevertheless.

There has certainly been a tremendous growth in the music and in the comprehension of the vision from which it arises. Standing on a red carpet, Kantner wore the now-famous black pajamas, and Slick was in a ceremonial Japanese outfit. Their movements were circumscribed by the clothing and the theatrical allusions were made in an Oriental mode. The interests in Asia, particularly China and Japan, being expressed by musicians is a fascinating subject in itself. The Far East has become a major theme in Lennon’s recent work and Donovan has slipped the koto into our heads from Essence To Essence. Kantner-Slick’s “Sketches Of China”, performed in Detroit, stands as the most beautiful and extensive consideration to date.

The concert was, at least from the strictly musical view, under Kantner’s guidance. The accents by Craig Chaquico’s lead guitar and Peter Kaukonen’s bass were interesting in that they were different from Kaukonen-Cassidy work, but finally were no match for the acid lead and body snatching bass of the latter. The band was tight and got across well the new musical space recently explored and recorded. An excellent execution of a segment of the Blows Against the Empire starship, complete with sound and lighting effects, deserves special mention. Slick’s vocals were as high-energy as ever – something one could have begun to doubt from recent recordings. John Barbata’s drums were always timely and neither weak nor overdone. The man beat the skins and not our heads. Loved it! UFO No. 1 was obviously not obtrusive on piano. And Papa John Creach was the one who brought the house down with his cannibal things.

The pieces of Starship most effective were those for which a theatrical handle could be found. For example, a security guard and a group of the so-called audience became involved in a minor altercation. Slick, seeing this, got down on her knees to him and sang, “nobody needs that kind of religion.” Somewhat naturally, a feeling of unity arose from this “confrontation”. This sort of risk-filled extramusical dynamics initiated by the Airplane become Starship is doubtlessly one of the primary sources of the groups’ liveliness – Improvisation.

Jefferson Starship, while clearly not all it can be, is more than a musical experience in any narrow sense, more than a remnant or revenant of the plane. We’re now taken even further downunder into the Other. These musicians really have launched many more than a thousand trips.