Who Is Jake The Shake?? 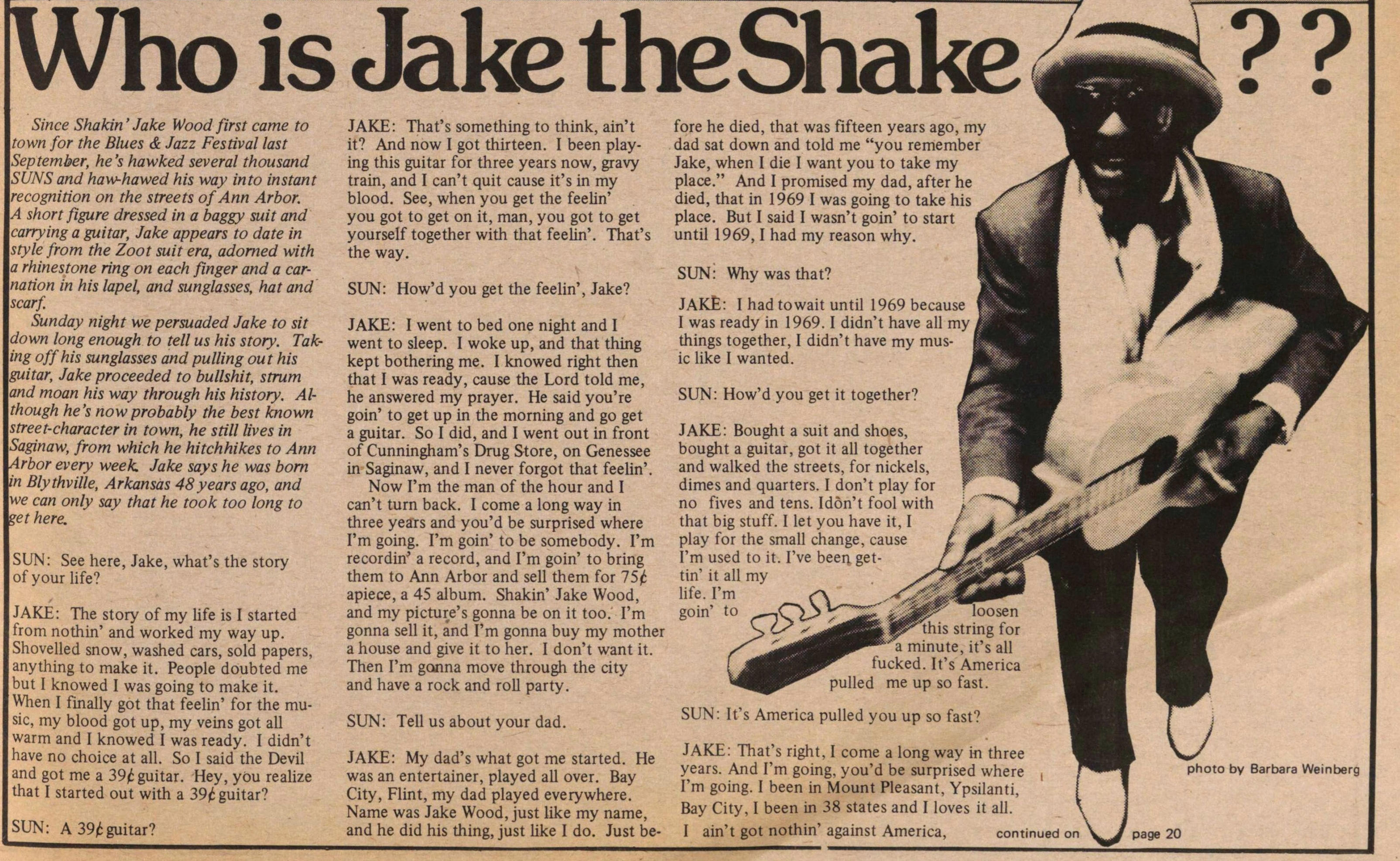 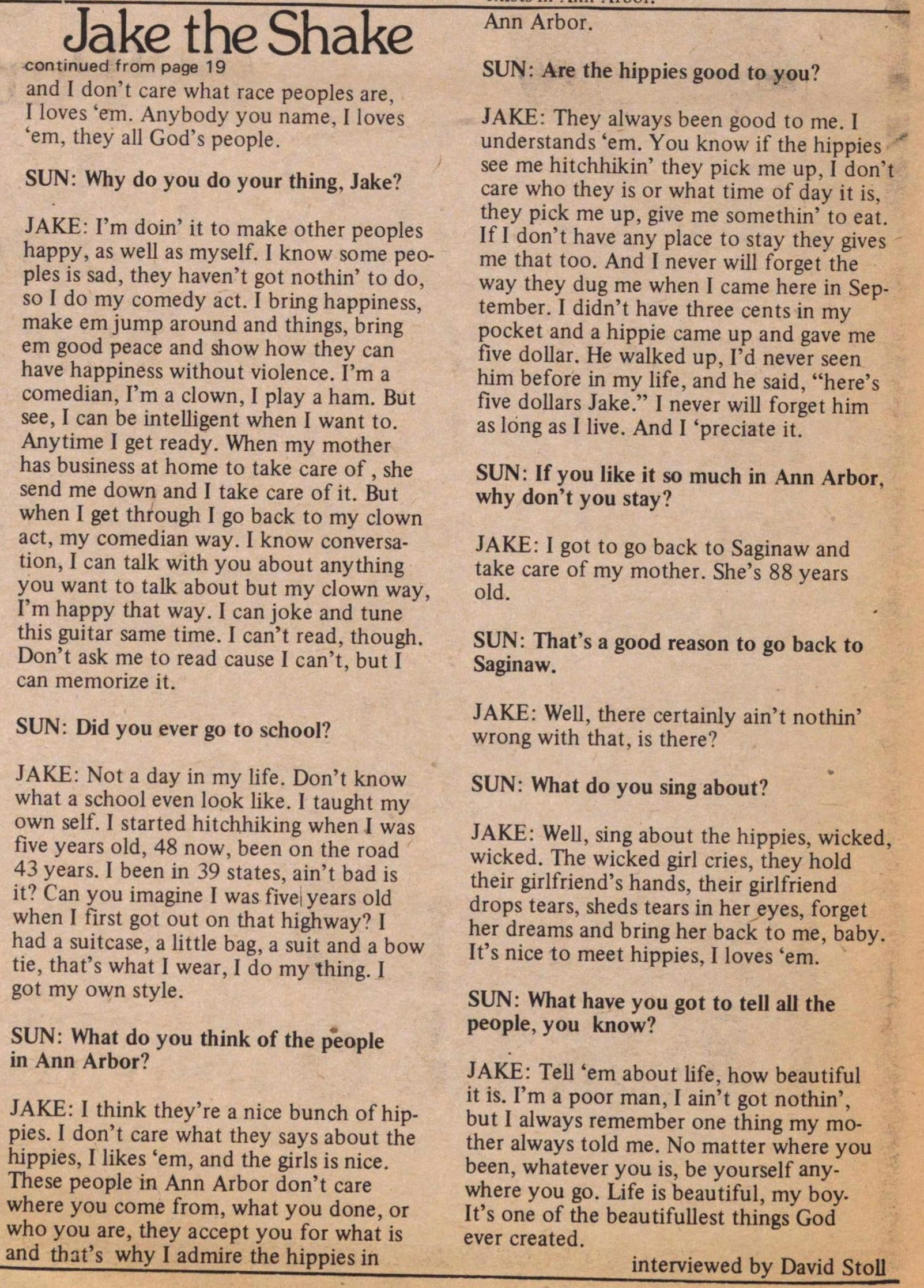 Who is Jake the Shake??

Since Shakin’ Jake Wood first came to town for the Blues & Jazz Festival last September, he’s hawked several thousand SUNS and haw-hawed his way into instant recognition on the streets of Ann Arbor. A short figure dressed in a baggy suit and carrying a guitar, Jake appears to date in style from the Zoot suit era, adorned with a rhinestone ring on each finger and a carnation in his lapel, and sunglasses, hat and scarf.

Sunday night we persuaded Jake to sit down long enough to tell us his story. Taking off his sunglasses and pulling out his guitar, Jake proceeded to bullshit, strum and moan his way through his history. Although he’s now probably the best known street-character in town, he still lives in Saginaw, from which he hitchhikes to Ann Arbor every week. Jake says he was born in Blythville, Arkansas 48 years ago, and we can only say that he took too long to get here.

SUN: See here, Jake, what’s the story of your life?

JAKE: The story of my life is I started from nothin’ and worked my way up. Shovelled snow, washed cars, sold papers, anything to make it. People doubted me but I knowed I was going to make it. When I finally got that feelin’ for the music, my blood got up, my veins got all warm and I knowed I was ready. I didn’t have no choice at all. So I said the Devil and got me a 39 cent guitar. Hey, you realize that I started out with a 39 cent guitar?

JAKE: That’s something to think, ain’t it? And now I got thirteen. I been playing this guitar for three years now, gravy train, and I can’t quit cause it’s in my blood. See, when you get the feelin’ you got to get on it, man, you got to get yourself together with that feelin’. That’s the way.

SUN: How’d you get the feelin’, Jake?

JAKE: I went to bed one night and I went to sleep. I woke up, and that thing kept bothering me. I knowed right then that I was ready, cause the Lord told me, he answered my prayer. He said you’re goin’ to get up in the morning and go get a guitar. So I did, and I went out in front of Cunningham’s Drug Store, on Genessee in Saginaw, and I never forgot that feelin’.

Now I’m the man of the hour and I can’t turn back. I come a long way in three years and you’d be surprised where I’m going. I’m goin’ to be somebody. I’m recordin’ a record, and I’m goin’ to bring them to Ann Arbor and sell them for 75 cents apiece, a 45 album. Shakin’ Jake Wood, and my picture’ s gonna be on it too. I’m gonna sell it, and I’m gonna buy my mother a house and give it to her. I don’t want it. Then I’m gonna move through the city and have a rock and roll party.

SUN: Tell us about your dad.

JAKE: My dad’s what got me started. He was an entertainer, played all over. Bay City, Flint, my dad played everywhere. Name was Jake Wood, just like my name, and he did his thing, just like I do. Just before he died, that was fifteen years ago, my dad sat down and told me “you remember Jake, when I die I want you to take my place.” And I promised my dad, after he died, that in 1969 I was going to take his place. But I said I wasn’t goin’ to start until 1969, I had my reason why.

SUN: Why was that?

SUN: How’d you get it together?

JAKE: Bought a suit and shoes, bought a guitar, got it all together and walked the streets, for nickels, dimes and quarters. I don’t play for no fives and tens. I don’t fool with that big stuff. I let you have it, I play for the small change, cause I’m used to it. I’ve been gettin’ it all my life. I’m goin’ to loosen this string for a minute, it’s all fucked. It’s America pulled me up so fast.

SUN: It’s America pulled you up so fast?

JAKE: That’s right, I come a long way in three years. And I’m going, you’d be surprised where I’m going. I been in Mount Pleasant, Ypsilanti, Bay City, I been in 38 states and I loves it all. I ain’t got nothin’ against America, and I don’t care what race peoples are, I loves ‘em. Anybody you name, I loves ‘em, they all God’s people.

SUN: Why do you do your thing, Jake?

JAKE: I’m doin’ it to make other peoples happy, as well as myself. I know some peoples is sad, they haven’t got nothin’ to do, so I do my comedy act. I bring happiness, make em jump around and things, bring em good peace and show how they can have happiness without violence. I’m a comedian, I’m a clown, I play a ham. But see, I can be intelligent when I want to. Anytime I get ready. When my mother has business at home to take care of, she send me down and I take care of it. But when I get through I go back to my clown act, my comedian way. I know conversation, I can talk with you about anything you want to talk about but my clown way, I’m happy that way. I can joke and tune this guitar same time. I can’t read, though. Don’t ask me to read cause I can’t, but I can memorize it.

SUN: Did you ever go to school?

JAKE: Not a day in my life. Don’t know what a school even look like. I taught my own self. I started hitchhiking when I was five years old, 48 now, been on the road 43 years. I been in 39 states, ain’t bad is it? Can you imagine I was five years old when I first got out on that highway? I had a suitcase, a little bag, a suit and a bow tie, that’s what I wear, I do my thing. I got my own style.

SUN: What do you think of the people in Ann Arbor?

JAKE: I think they’re a nice bunch of hippies. I don’t care what they says about the hippies, I likes ‘em, and the girls is nice. These people in Ann Arbor don’t care where you come from, what you done, or who you are, they accept you for what is and that’s why I admire the hippies in Ann Arbor.

SUN: Are the hippies good to you?

JAKE: They always been good to me. I understands ‘em. You know if the hippies see me hitchhikin’ they pick me up, I don’t care who they is or what time of day it is, they pick me up, give me somethin’ to eat. If I don’t have any place to stay they gives me that too. And I never will forget the way they dug me when I came here in September. I didn’t have three cents in my pocket and a hippie came up and gave me five dollars. He walked up, I’d never seen him before in my life, and he said, “here’s five dollars Jake.” I never will forget him as long as I live. And I ‘preciate it.

SUN: If you Iike it so much in Ann Arbor, why don’t you stay?

JAKE: I got to go back to Saginaw and take care of my mother. She’s 88 years old.

SUN: That’s a good reason to go back to Saginaw.

JAKE: Well, there certainly ain’t nothin’ wrong with that, is there?

SUN: What do you sing about?

JAKE: Well, sing about the hippies, wicked, wicked. The wicked girl cries, they hold their girlfriend’s hands, their girlfriend drops tears, sheds tears in her eyes, forget her dreams and bring her back to me, baby. It’s nice to meet hippies, I loves ‘em.

SUN: What have you got to tell all the people, you know?

JAKE: Tell ‘em about life, how beautiful it is. I’m a poor man, I ain’t got nothin’, but I always remember one thing my mother always told me. No matter where you been, whatever you is, be yourself anywhere you go. Life is beautiful, my boy. It’s one of the beautifullest things God ever created.