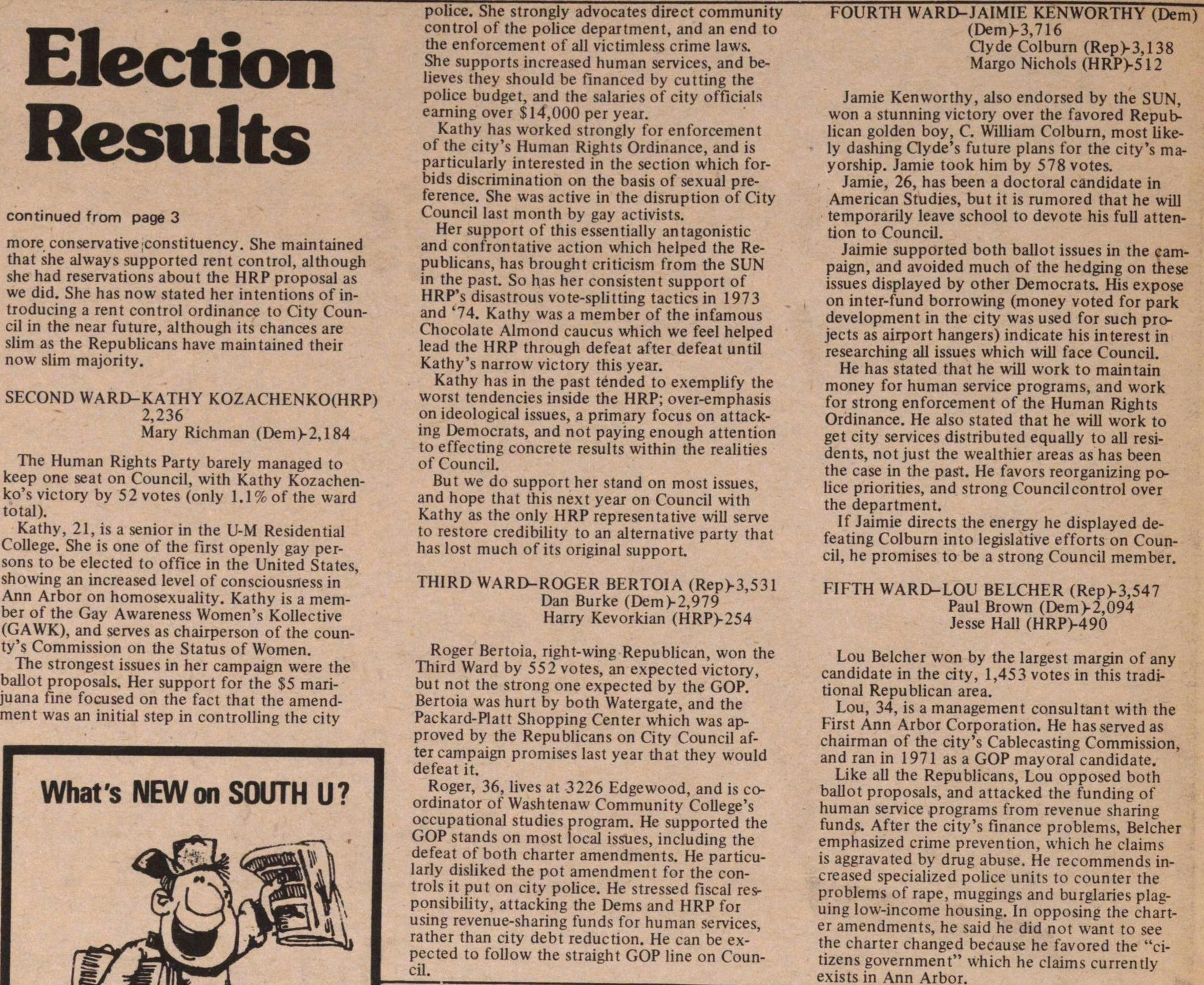 more conservative constituency. She maintained that she always supported rent control, although she had reservations about the HRP proposal as we did. She has now stated her intentions of introducing a rent control ordinance to City Council in the near future, although its chances are slim as the Republicans have maintained their now slim majority.

The Human Rights Party barely managed to keep one seat on Council, with Kathy Kozachenko’s victory by 52 votes (only 1.1% of the ward total).

Kathy, 21, is a senior in the U-M Residential College. She is one of the first openly gay persons to be elected to office in the United States, showing an increased level of consciousness in Ann Arbor on homosexuality. Kathy is a member of the Gay Awareness Women’s Kollective (GAWK), and serves as chairperson of the county’s Commission on the Status of Women.

The strongest issues in her campaign were the ballot proposals. Her support for the $5 marijuana fine focused on the fact that the amendment was an initial step in controlling the city police. She strongly advocates direct community control of the police department, and an end to the enforcement of all victimless crime laws. She supports increased human services, and believes they should be financed by cutting the police budget, and the salaries of city officials earning over $14,000 per year.

Kathy has worked strongly for enforcement of the city’s Human Rights Ordinance, and is particularly interested in the section which forbids discrimination on the basis of sexual preference. She was active in the disruption of City Council last month by gay activists.

Her support of this essentially antagonistic and confrontative action which helped the Republicans, has brought criticism from the SUN in the past. So has her consistent support of HRP’s disastrous vote-splitting tactics in 1973 and ‘74. Kathy was a member of the infamous Chocolate Almond caucus which we feel helped lead the HRP through defeat after defeat until Kathy’s narrow victory this year.

Kathy has in the past tended to exemplify the worst tendencies inside the HRP; over-emphasis on ideological issues, a primary focus on attacking Democrats, and not paying enough attention to effecting concrete results within the realities of Council.

But we do support her stand on most issues, and hope that this next on Council with Kathy as the only HRP representative will serve to restore credibility to an alternative party that has lost much of its original support

Roger Bertoia, right-wing Republican, won the Third Ward by 552 votes, an expected victory, but not the strong one expected by the GOP. Bertoia was hurt by both Watergate, and the Packard-Platt Shopping Center which was approved by the Republicans on City Council after campaign promises last year that they would defeat it.

Roger, 36, lives at 3226 Edgewood, and is coordinator of Washtenaw Community College’s occupational studies program. He supported the GOP stands on most focal issues, including the defeat of both charter amendments. He particularly disliked the pot amendment for the controls it put on city police. He stressed fiscal responsibility, attacking the Dems and HRP for using revenue-sharing funds for human services, rather than city debt reduction. He can be expected to follow the straight GOP line on Council.

Jamie, 26, has been a doctoral candidate in American Studies, but it is rumored that he will temporarily leave school to devote his full attention to Council.

Jaimie supported both ballot issues in the campaign, and avoided much of the hedging on these issues displayed by other Democrats. His exposé on inter-fund borrowing (money voted for park development in the city was used for such projects as airport hangers) indicate his interest in researching all issues which will face Council.

He has stated that he will work to maintain money for human service programs, and work for strong enforcement of the Human Rights Ordinance. He also stated that he will work to get city services distributed equally to all residents, not just the wealthier areas as has been the case in the past. He favors reorganizing police priorities, and strong Council control over the department.

If Jaimie directs the energy he displayed defeating Colburn into legislative efforts on Council, he promises to be a strong Council member.

Lou Belcher won by the largest margin of any candidate in the city, 1,453 votes in this traditional Republican area.

Lou, 34, is a management consultant with the First Ann Arbor Corporation. He has served as chairman of the city’s Cablecasting Commission, and ran in 1971 as a GOP mayoral candidate.

Like all the Republicans, Lou opposed both ballot proposals, and attacked the funding of human service programs from revenue sharing funds. After the city’s finance problems, Belcher emphasized crime prevention, which he claims is aggravated by drug abuse. He recommends increased specialized police units to counter the problems of rape, muggings and burglaries plaguing low-income housing. In opposing the charter amendments, he said he did not want to see the charter changed because he favored the “citizens government” which he claims currently exists in Ann Arbor.