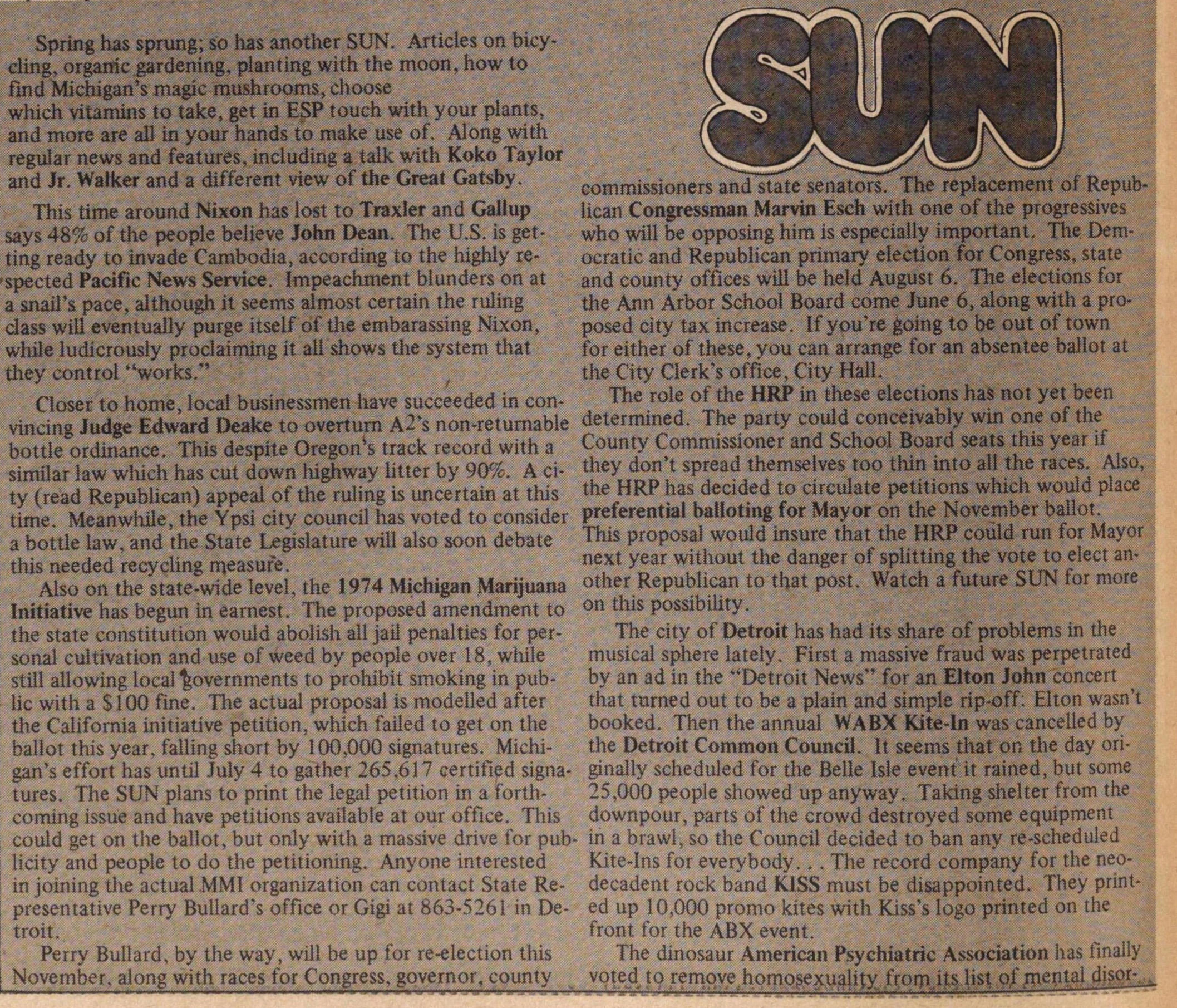 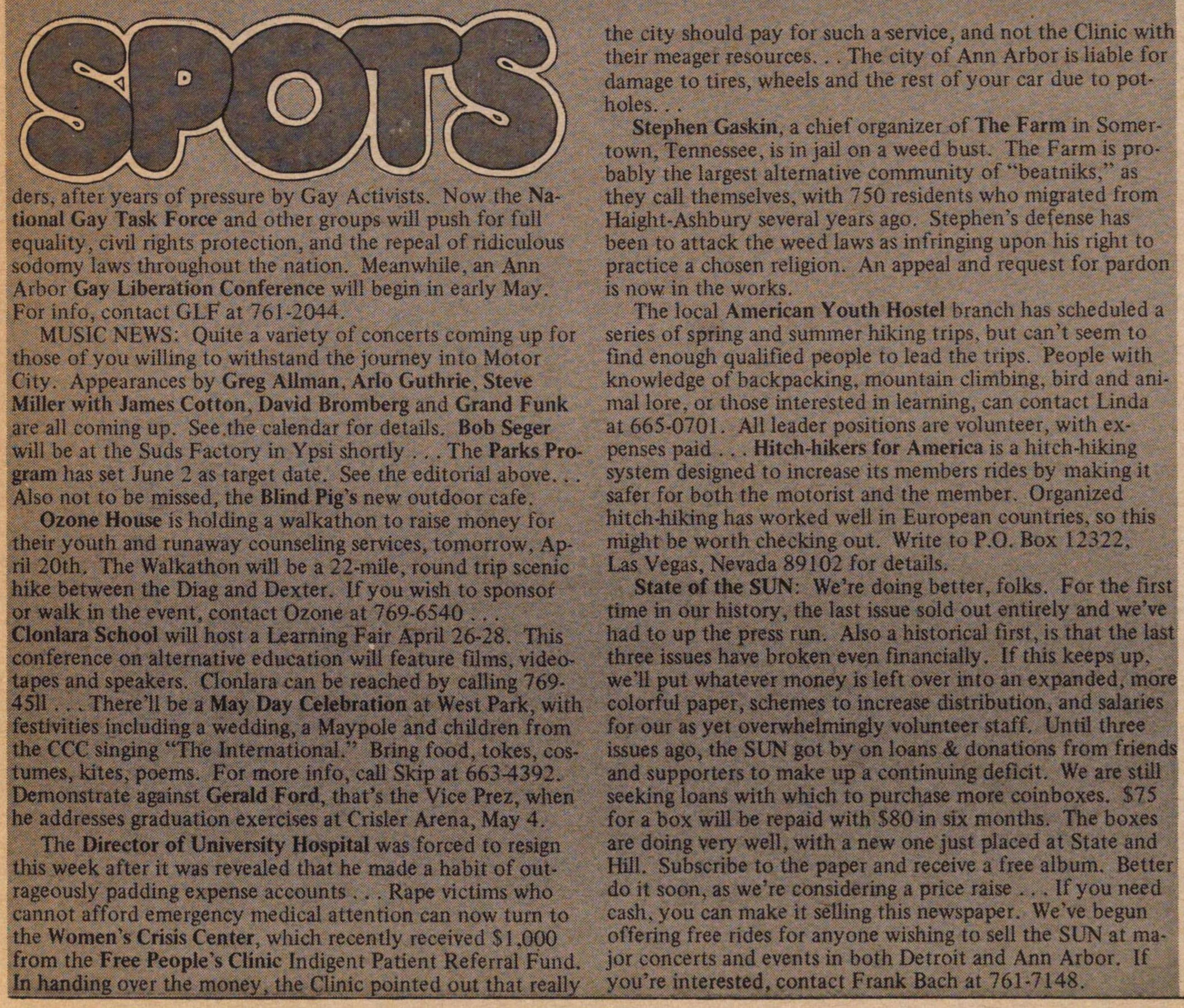 Spring has sprung; so has another SUN. Articles on bicycling, organic gardening, planting with the moon, how to find Michigan’s magic mushrooms, choose which vitamins to take, get in ESP touch with your plants, and more are all in your hands to make use of. Along with regular news and features, including a talk with Koko Taylor and Jr. Walker and a different view of the Great Gatsby.

This time around Nixon has lost to Traxler and Gallup says 48% of the people believe John Dean. The U.S. is getting ready to invade Cambodia, according to the highly respected Pacific News Service. Impeachment blunders on at a snail’s pace, although it seems almost certain the ruling class will eventually purge itself of the embarrassing Nixon, while ludicrously proclaiming it all shows the system that they control “works.”

Closer to home, local businessmen have succeeded in convincing Judge Edward Deake to overturn A2’s non-returnable bottle ordinance. This despite Oregon’s track record with a similar law which has cut down highway litter by 90%. A city (read Republican) appeal of the ruling is uncertain at this time. Meanwhile, the Ypsi city council has voted to consider a bottle law, and the State Legislature will also soon debate this needed recycling measure.

Also on the state-wide level, the 1974 Michigan Marijuana Initiative has begun in earnest. The proposed amendment to the state constitution would abolish all jail penalties for personal cultivation and use of weed by people over 18, while still allowing local governments to prohibit smoking in public with a $100 fine. The actual proposal is modelled after the California initiative petition, which failed to get on the ballot this year, falling short by 100,000 signatures. Michigan’s effort has until May 4 to gather 265,617 certified signatures. The SUN plans to print the legal petition in a forthcoming issue and have petitions available at our office. This could get on the ballot, but only with a massive drive for publicity and people to do the petitioning. Anyone interested in joining the actual MMI organization can contact State Representative Perry Bullard’s office or Gigi at 863-5261 in Detroit.

Perry Bullard, by the way, will be up for re-election this November, along with races for Congress, governor, county commissioners and state senators. The replacement of Republican Congressman Marvin Esch with one of the progressives who will be opposing him is especially important. The Democratic and Republican primary election for Congress, state and county offices will be held August 6. The elections for the Ann Arbor School Board come June 6, along with a proposed city tax increase. If you’re going to be out of town for either of these, you can arrange for an absentee ballot at the City Clerk’s office, City Hall.

The role of the HRP in these elections has not yet been determined. The party could conceivably win one of the County Commissioner and School Board seats this year if they don’t spread themselves too thin into all the races. Also, the HRP has decided to circulate petitions which would place preferential balloting for Mayor on the November ballot. This proposal would ensure that the HRP could run for Mayor next year without the danger of splitting the vote to elect another Republican to that post. Watch a future SUN for more on this possibility.

The city of Detroit has had its share of problems in the musical sphere lately. First a massive fraud was perpetrated by an ad in the “Detroit News” for an Elton John concert that turned out to be a plain and simple rip-off : Elton wasn’t booked. Then the annual WABX Kite-In was cancelled by the Detroit Common Council. It seems that on the day originally scheduled for the Belle Isle event it rained, but some 25,000 people showed up anyway. Taking shelter from the downpour, parts of the crowd destroyed some equipment in a brawl, so the Council decided to ban any re-scheduled Kite-Ins for everybody. . . The record company for the neo-decadent rock band KISS must be disappointed. They printed up 10,000 promo kites with Kiss’s logo printed on the front for the ABX event.

The dinosaur American Psychiatric Association has finally voted to remove homosexuality from its list of mental disorders, after years of pressure by Gay Activists. Now the National Gay Task Force and other groups will push for full equality, civil rights protection, and the repeal of ridiculous sodomy laws throughout the nation. Meanwhile, an Ann Arbor Gay Liberation Conference will begin in early May. For info, contact GLF at 761-2044.

MUSIC NEWS: Quite a variety of concerts coming up for those of you willing to withstand the journey into Motor City. Appearances by Greg Allman, Arlo Guthrie, Steve Miller with James Cotton, David Bromberg and Grand Funk are all coming up. See the calendar for details. Bob Seger will be at the Suds Factory in Ypsi shortly . . . The Parks Program has set June 2 as target date. See the editorial above. . . Also not to be missed, the Blind Pig’s new outdoor café.

Ozone House is holding a walkathon to raise money for their youth and runaway counseling services, tomorrow, April 20th. The Walkathon will be a 22-mile, round trip scenic hike between the Diag and Dexter. If you wish to sponsor or walk in the event, contact Ozone at 769-6540 . . . Clonlara School will host a Learning Fair April 26-28. This conference on alternative education will feature films, videotapes and speakers. Clonlara can be reached by calling 769-4511 . . . There’ll be a May Day Celebration at West Park, with festivities including a wedding, a Maypole and children from the CCC singing “The International.” Bring food, tokes, costumes, kites, poems. For more info, call Skip at 663-4392. Demonstrate against Gerald Ford, that’s the Vice Prez, when he addresses graduation exercises at Crisler Arena, May 4.

The Director of University Hospital was forced to resign this week after it was revealed that he made a habit of outrageously padding expense accounts . . . Rape victims who cannot afford emergency medical attention can now turn to the Women’s Crisis Center, which recently received $1,000 from the Free People’s Clinic Indigent Patient Referral Fund. In handing over the money, the Clinic pointed out that really the city should pay for such a service, and not the Clinic with their meager resources. . . The city of Ann Arbor is liable for damage to tires, wheels and the rest of your car due to potholes. . .

Stephen Gaskin, a chief organizer of The Farm in Somertown, Tennessee, is in jail on a weed bust. The Farm is probably the largest alternative community of “beatniks,” as they call themselves, with 750 residents who migrated from Haight-Ashbury several years ago. Stephen’s defense has been to attack the weed laws as infringing upon his right to practice a chosen religion. An appeal and request for pardon is now in the works.

The local American Youth Hostel branch has scheduled a series of spring and summer hiking trips, but can’t seem to find enough qualified people to lead the trips. People with knowledge of backpacking, mountain climbing, bird and animal lore, or those interested in learning, can contact Linda at 665-0701. All leader positions are volunteer, with expenses paid . . . Hitch-hikers for America is a hitch-hiking system designed to increase its members rides by making it safer for both the motorist and the member. Organized hitch-hiking has worked well in European countries, so this might be worth checking out. Write to P.O. Box 12322, Las Vegas, Nevada 89102 for details.

State of the SUN: We’re doing better, folks. For the first time in our history, the last issue sold out entirely and we’ve had to up the press run. Also a historical first, is that the last three issues have broken even financially. If this keeps up, we’ll put whatever money is left over into an expanded, more colorful paper, schemes to increase distribution, and salaries for our as yet overwhelmingly volunteer staff. Until three issues ago, the SUN got by on loans & donations from friends and supporters to make up a continuing deficit. We are still seeking loans with which to purchase more coinboxes. $75 for a box will be repaid with $80 in six months. The boxes are doing very well, with a new one just placed at State and Hill. Subscribe to the paper and receive a free album. Better do it soon, as we’re considering a price raise . . . If you need cash, you can make it selling this newspaper. We’ve begun offering free rides for anyone wishing to sell the SUN at major concerts and events in both Detroit and Ann Arbor. If you’re interested, contact Frank Bach at 761-7148.