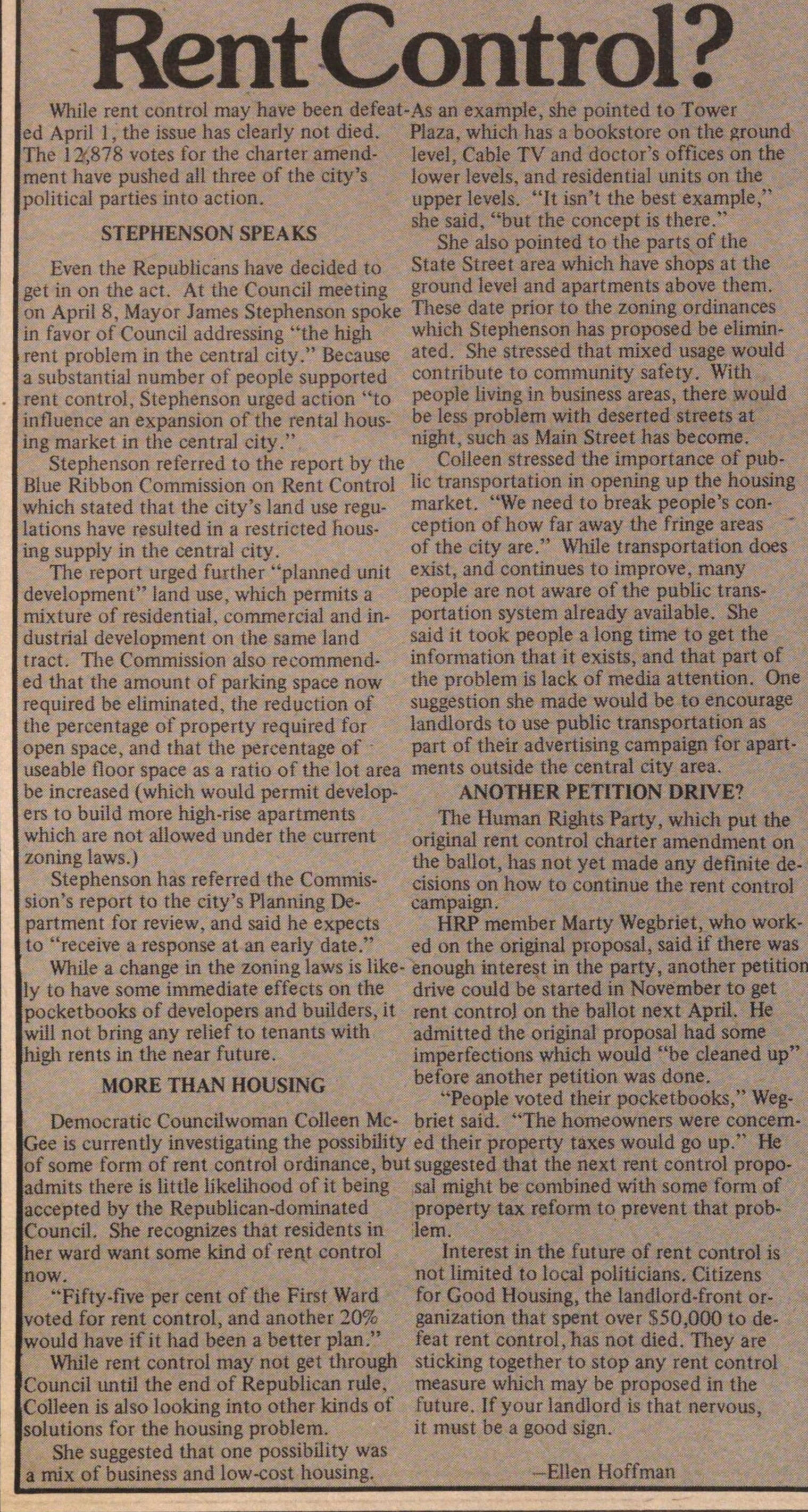 While rent control may have been defeated April 1, the issue has clearly not died. The 12,878 votes for the charter amendment have pushed all three of the city’s political parties into action.

Even the Republicans have decided to get in on the act. At the Council meeting on April 8, Mayor James Stephenson spoke in favor of Council addressing “the high rent problem in the central city.” Because a substantial number of people supported rent control, Stephenson urged action “to influence an expansion of the rental housing market in the central city.”

Stephenson referred to the report by the Blue Ribbon Commission on Rent Control which stated that the city’s land use regulations have resulted in a restricted housing supply in the central city.

The report urged further “planned unit development” land use, which permits a mixture of residential, commercial and industrial development on the same land tract. The Commission also recommended that the amount of parking space now required be eliminated, the reduction of the percentage of property required for open space, and that the percentage of useable floor space as a ratio of the lot area be increased (which would permit developers to build more high-rise apartments which are not allowed under the current zoning laws.)

Stephenson has referred the Commission’s report to the city’s Planning Department for review, and said he expects to “receive a response at an early date.”

While a change in the zoning laws is likely to have some immediate effects on the pocketbooks of developers and builders, it will not bring any relief to tenants with high rents in the near future.

Democratic Councilwoman Colleen McGee is currently investigating the possibility of some form of rent control ordinance, but admits there is little likelihood of it being accepted by the Republican-dominated Council. She recognizes that residents in her ward want some kind of rent control now.

“Fifty-five per cent of the First Ward voted for rent control, and another 20% would have if it had been a better plan.”

While rent control may not get through Council until the end of Republican rule, Colleen is also looking into other kinds of solutions for the housing problem.

She suggested that one possibility was a mix of business and low-cost housing. As an example, she pointed to Tower Plaza, which has a bookstore on the ground level, Cable TV and doctor’s offices on the lower levels, and residential units on the upper levels. “It isn’t the best example,” she said, “but the concept is there.”

She also pointed to the parts of the State Street area which have shops at the ground level and apartments above them. These date prior to the zoning ordinances which Stephenson has proposed be eliminated. She stressed that mixed usage would contribute to community safety. With people living in business areas, there would be less problem with deserted streets at night, such as Main Street has become.

Colleen stressed the importance of public transportation in opening up the housing market. “We need to break people’s conception of how far away the fringe areas of the city are.” While transportation does exist, and continues to improve, many people are not aware of the public transportation system already available. She said it took people a long time to get the information that it exists, and that part of the problem is lack of media attention. One suggestion she made would be to encourage landlords to use public transportation as part of their advertising campaign for apartments outside the central city area.

The Human Rights Party, which put the original rent control charter amendment on the ballot, has not yet made any definite decisions on how to continue the rent control campaign.

“People voted their pocketbooks,” Wegbriet said. “The homeowners were concerned their property taxes would go up.” He suggested that the next rent control proposal might be combined with some form of property tax reform to prevent that problem.

Interest in the future of rent control is not limited to local politicians. Citizens for Good Housing, the landlord-front organization that spent over $50,000 to defeat rent control, has not died. They are sticking together to stop any rent control measure which may be proposed in the future. If your landlord is that nervous, it must be a good sign.