Grow Your Own? Ask Any Vegetable! 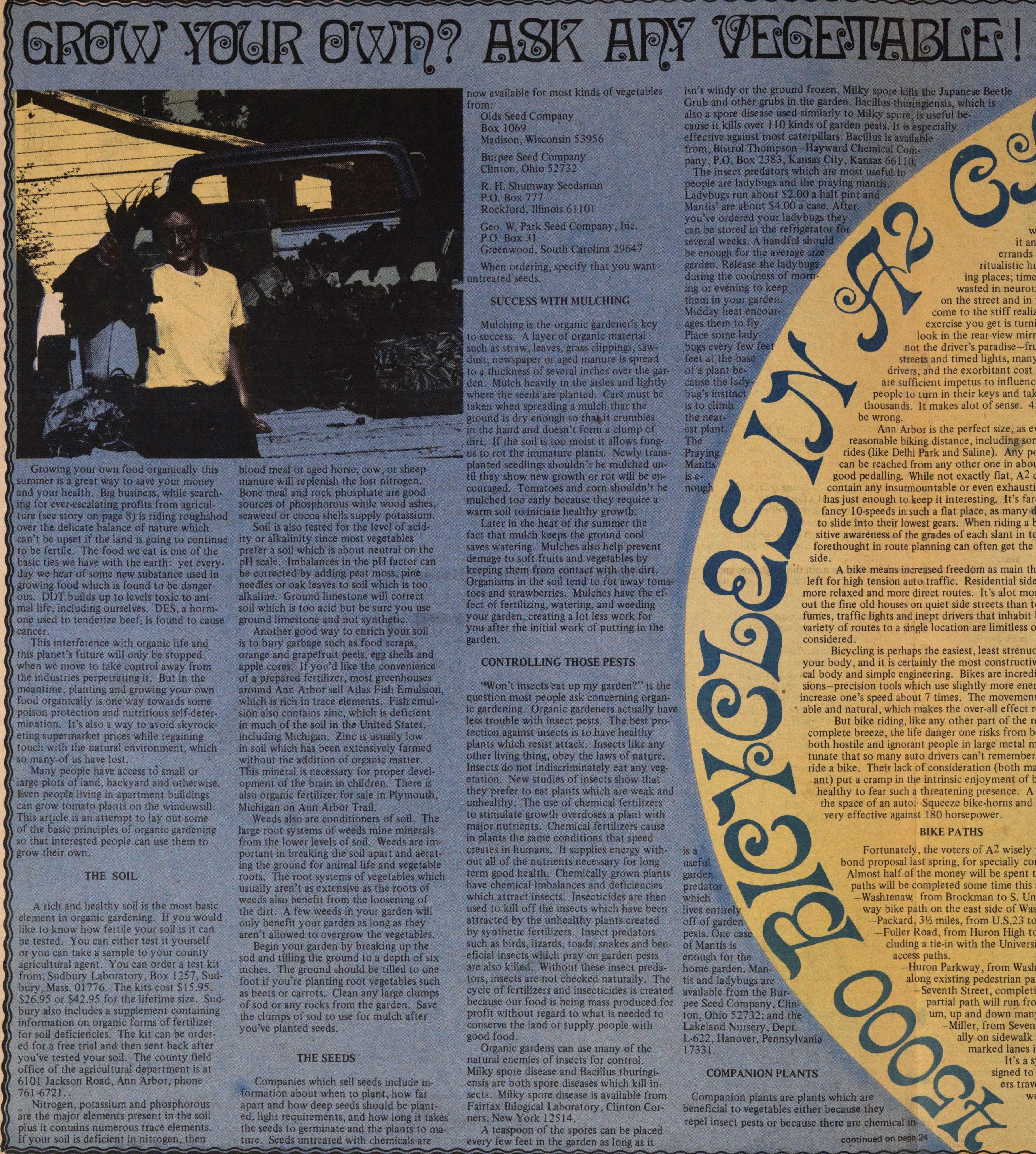 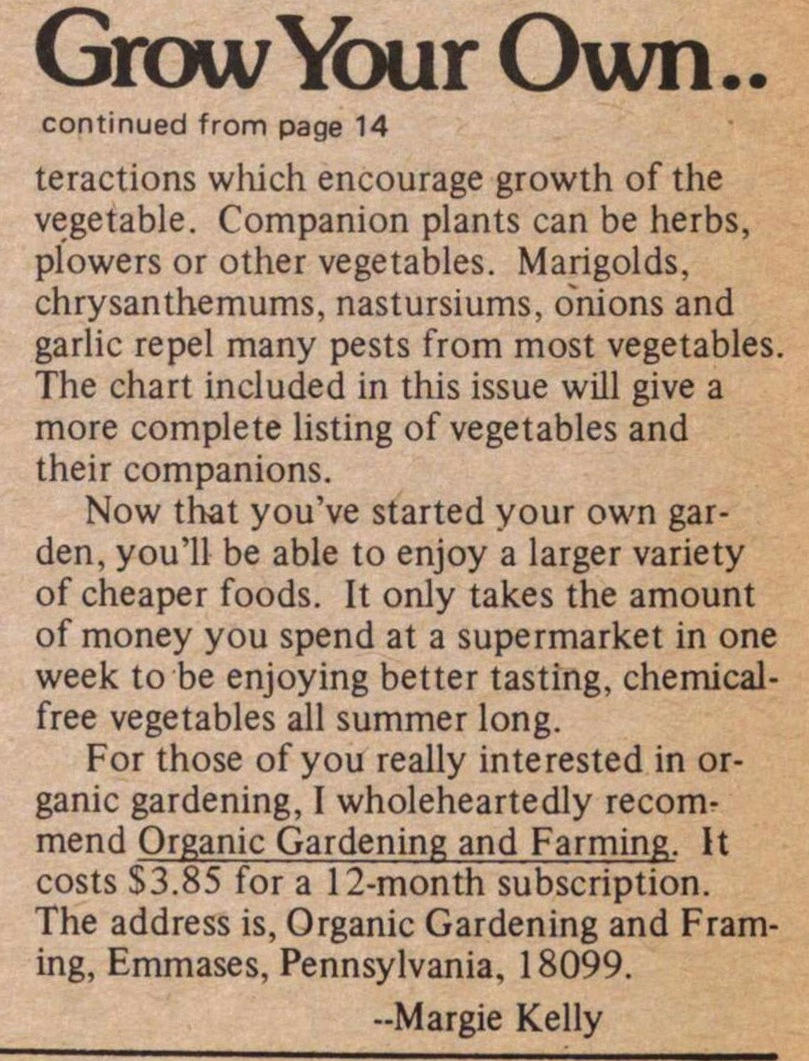 GROW YOUR OWN? ASK ANY VEGETABLE!

Growing your own food organically this summer is a great way to save your money and your health. Big business, while searching for ever-escalating profits from agriculture (see story on page is riding roughshod over the delicate balance of nature which can’t be upset if the land is going to continue to be fertile. The food we eat is one of the basic ties we have with the earth: yet every day we hear of some new substance used in growing food which is found to be dangerous. DDT builds up to levels toxic to animal life, including ourselves. DES, a hormone used to tenderize beef, is found to cause cancer.

This interference with organic life and this planet’s future will only be stopped % when we move to take control away from # the industries perpetrating it. But in the l meantime, planting and growing your own if food organically is one way towards some  poison protection and nutritious self-determination. It’s also a way to avoid skyrocketing supermarket prices while regaining touch with the natural environment, which so many of us have lost.

Many people have access to small or large plots of land, backyard and otherwise.  Even people living in apartment buildings can grow tomato plants on the windowsill. This article is an attempt to lay out some of the basic principles of organic gardening so that interested people can use them to  grow their own.

A rich and healthy soil is the most basic element in organic gardening. If you would like to know how fertile your soil is it can be tested. You can either test it yourself or you can take a sample to your county agricultural agent. You can order a test kit from; Sudbury Laboratory, Box 1257, Sudbury, Mass. 01776. The kits cost $15.95, $26.95 or $42.95 for the lifetime size. Sudbury also includes a supplement containing if information on organic forms of fertilizer for soil deficiencies. The kit can be ordered for a free trial and then sent back after you’ve tested your soil. The county field office of the agricultural department is at 6101 Jackson Road, Ann Arbor, phone 761-6721.

Nitrogen, potassium and phosphorous are the major elements present in the soil plus it contains numerous trace elements. If your soil is deficient in nitrogen, then blood meal or aged horse, cow, or sheep manure will replenish the lost nitrogen. Bone meal and rock phosphate are good sources of phosphorous while wood ashes, seaweed or cocoa shells supply potassium.

Another good way to enrich your soil is to bury garbage such as food scraps, orange and grapefruit peels, egg shells and apple cores. If you’d like the convenience of a prepared fertilizer, most greenhouses around Ann Arbor sell Atlas Fish Emulsion, which is rich in trace elements. Fish emulsion also contains zinc, which is deficient in much of the soil in the United States, including Michigan. Zinc is usually low in soil which has been extensively farmed without the addition of organic matter. This mineral is necessary for proper development of the brain in children. There is also organic fertilizer for sale in Plymouth, Michigan on Ann Arbor Trail.

Weeds also are conditioners of soil. The large root systems of weeds mine minerals from the lower levels of soil. Weeds are important in breaking the soil apart and aerating the ground for animal life and vegetable roots. The root systems of vegetables which usually aren’t as extensive as the roots of weeds also benefit from the loosening of the dirt. A few weeds in your garden will only benefit your garden as long as they aren’t allowed to overgrow the vegetables.

Begin your garden by breaking up the sod and tilling the ground to a depth of six inches. The ground should be tilled to one foot if you’re planting root vegetables such as beets or carrots. Clean any large clumps of sod or any rocks from the garden. Save the clumps of sod to use for mulch after you’ve planted seeds.

Companies which sell seeds include information about when to plant, how far apart and how deep seeds should be planted, light requirements, and how long it takes the seeds to germinate and the plants to mature. Seeds untreated with chemicals are now available for most kinds of vegetables from:

When ordering, specify that you want untreated seeds.

Mulching is the organic gardener’s key to success. A layer of organic material such as straw, leaves, grass clippings, sawdust, newspaper or aged manure is spread to a thickness of several inches over the garden. Mulch heavily in the aisles and lightly where the seeds are planted. Care must be taken when spreading a mulch that the ground is dry enough so that it crumbles in the hand and doesn’t form a clump of dirt. If the soil is too moist it allows fungus to rot the immature plants. Newly transplanted seedlings shouldn’t be mulched until they show new growth or rot will be encouraged. Tomatoes and corn shouldn’t be mulched too early because they require a warm soil to initiate healthy growth.

Later in the heat of the summer the fact that mulch keeps the ground cool saves watering. Mulches also help prevent damage to soft fruits and vegetables by keeping them from contact with the dirt. Organisms in the soil tend to rot away tomatoes and strawberries. Mulches have the effect of fertilizing, watering, and weeding your garden, creating a lot less work for you after the initial work of putting in the garden.

“Won’t insects eat up my garden?” is the question most people ask concerning organic gardening. Organic gardeners actually have less trouble with insect pests. The best protection against insects is to have healthy plants which resist attack. Insects like any other living thing, obey the laws of nature. Insects do not indiscriminately eat any vegetation. New studies of insects show that they prefer to eat plants which are weak and unhealthy. The use of chemical fertilizers to stimulate growth overdoses a plant with major nutrients. Chemical fertilizers cause in plants the same conditions that speed creates in humans. It supplies energy without all of the nutrients necessary for long term good health. Chemically grown plants have chemical imbalances and deficiencies which attract insects. Insecticides are then used to kill off the insects which have been attracted by the unhealthy plants created by synthetic fertilizers. Insect predators such as birds, lizards, toads, snakes and beneficial insects which pray on garden pests are also killed. Without these insect predators, insects are not checked naturally. The cycle of fertilizers and insecticides is created because our food is being mass produced for profit without regard to what is needed to conserve the land or supply people with good food.

A teaspoon of the spores can be placed every few feet in the garden as long as it isn’t windy or the ground frozen. Milky spore kills the Japanese Beetle Grub and other grubs in the garden. Bacillus thuringiensis, which is also a spore disease used similarly to Milky spore, is useful because it kills over 110 kinds of garden pests. It is especially effective against most caterpillars. Bacillus is available from, Bistrol Thompson-Hayward Chemical Company, P.O. Box 2383, Kansas City, Kansas 66110.

The insect predators which are most useful to people are ladybugs and the praying mantis. Ladybugs run about $2.00 a half pint and Mantis’ are about $4.00 a case. After you’ve ordered your ladybugs they can be stored in the refrigerator for several weeks. A handful should be enough for the average size garden. Release the ladybugs during the coolness of morning or evening to keep them in your garden. Midday heat encourages them to fly. Place some ladybugs every few feet at the base of a plant because the ladybug’s instinct is to climb the nearest plant. The Praying Mantis is enough is a useful garden predator which lives entirely off of garden pests. One case of Mantis is enough for the home garden. Mantis and ladybugs are available from the Burpee Seed Company, Clinton, Ohio 52732; and the Lakeland Nursery, Dept. L-622, Hanover, Pennsylvania 17331.

Companion plants are plants which are beneficial to vegetables either because they repel insect pests or because there are chemical interactions which encourage growth of the vegetable. Companion plants can be herbs, flowers or other vegetables. Marigolds. chrysanthemums, nastursiums, onions and garlic repel many pests from most vegetables. The chart included in this issue will give a more complete listing of vegetables and their companions.

Now that you’ve started your own garden, you’ll be able to enjoy a larger variety of cheaper foods. It only takes the amount of money you spend at a supermarket in one week to be enjoying better tasting, chemical-free vegetables all summer long.