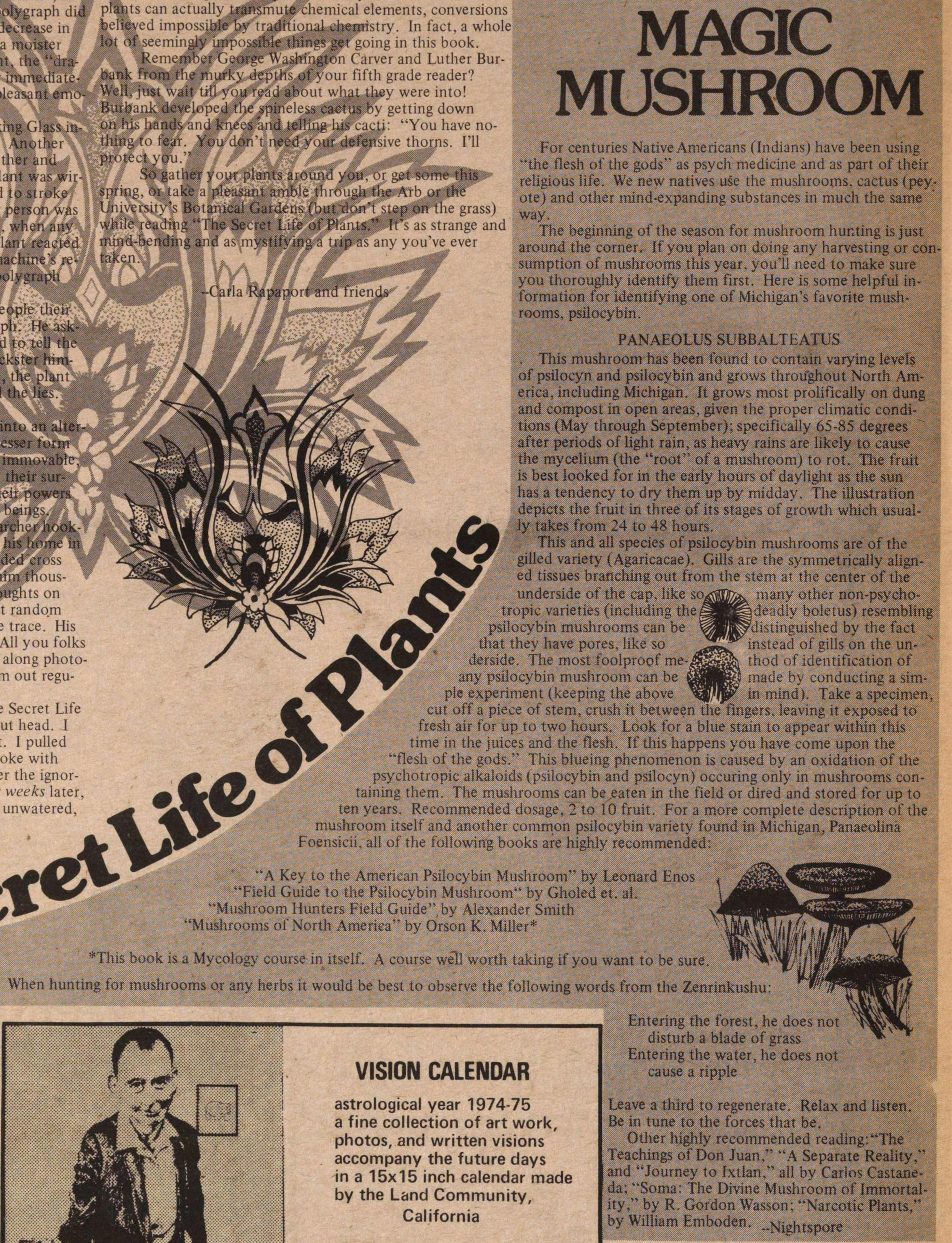 For centuries Native Americans (Indians) have been using "the flesh of the gods" as psych medicine and as part of their religious life. We new natives use the mushrooms, cactus (peyote) and other mind-expanding substances in much the same way.
The beginning of the season for mushroom hunting is just around the corner, If you plan on doing any harvesting or consumption of mushrooms this year, you'll need to make sure you thoroughly identify them first. Here is some helpful information for identifying one of Michigan's favorite mushrooms, psilocybin.

PANAEOLUS SUBBALTHATUS
This mushroom has been found to contain varying levels of psilocyn and psilocybin and grows throughout North America, including Michigan. It grows most prolifically on dung and compost in open areas, given the proper climatic conditions (May through September); specifically 65-85 degrees after periods of light rain, as heavy rains are likely to cause the mycelium (the "root" of a mushroom) to rot. "The fruit is best looked for in the early hours of daylight as the sun has a tendency to dry them up by midday. The illustration depicts the fruit in three of its stages of growth which usually takes from 24 to 48 hours.
This and all species of psilocybin mushrooms are of the gilled variety (Agaricacae). Gills are the symmetrically aligned tissues branching out from the stem at the center of the underside of the cap, like so many other non-psychotropic varieties (including the deadly boletus) resembling psilocybin mushrooms can be distinguished by the fact that they have pores, like so instead of gills on the underside. The most foolproof method of identification of any psilocybin mushroom can be made by conducting a simple experiment (keeping the above in mind). Take a specimen, cut off a piece of stem, crush it between the fingers, leaving it exposed to fresh air for up to two hours. Look for a blue stain to appear within this time in the juices and the flesh. If this happens you have come upon the "flesh of the gods." This blueing phenomenon is caused by an oxidation of the psychotropic alkaloids (psilocybin and psilocyn) occurring only in mushrooms containing them. The mushrooms can be eaten in the field or dried and stored for up to ten years. recommended dosage, 2 to 10 fruit. For a more complete description of the mushroom itself and another common psilocybin variety found in Michigan, Panaeolina Foenicii, all of the following books are highly recommended.

This book is a Mycology course in itself. A course well worth taking if you want to be sure.
When hunting for mushrooms or any herbs it would be best to observe the following words from the Zenrinkushu:

Leave a third to regenerate. Relax and listen. Be in tune to the forces that be. Other highly recommended reading; "The Teachings of Don Juan," "A Separate Reality," and "Jorney to Ixtlan," all by Carlos Castaneda; "Soma: The Divine Mushroom of Immortality," by R. Gordon Wasson; "Narcotic Plants," by William Emboden.