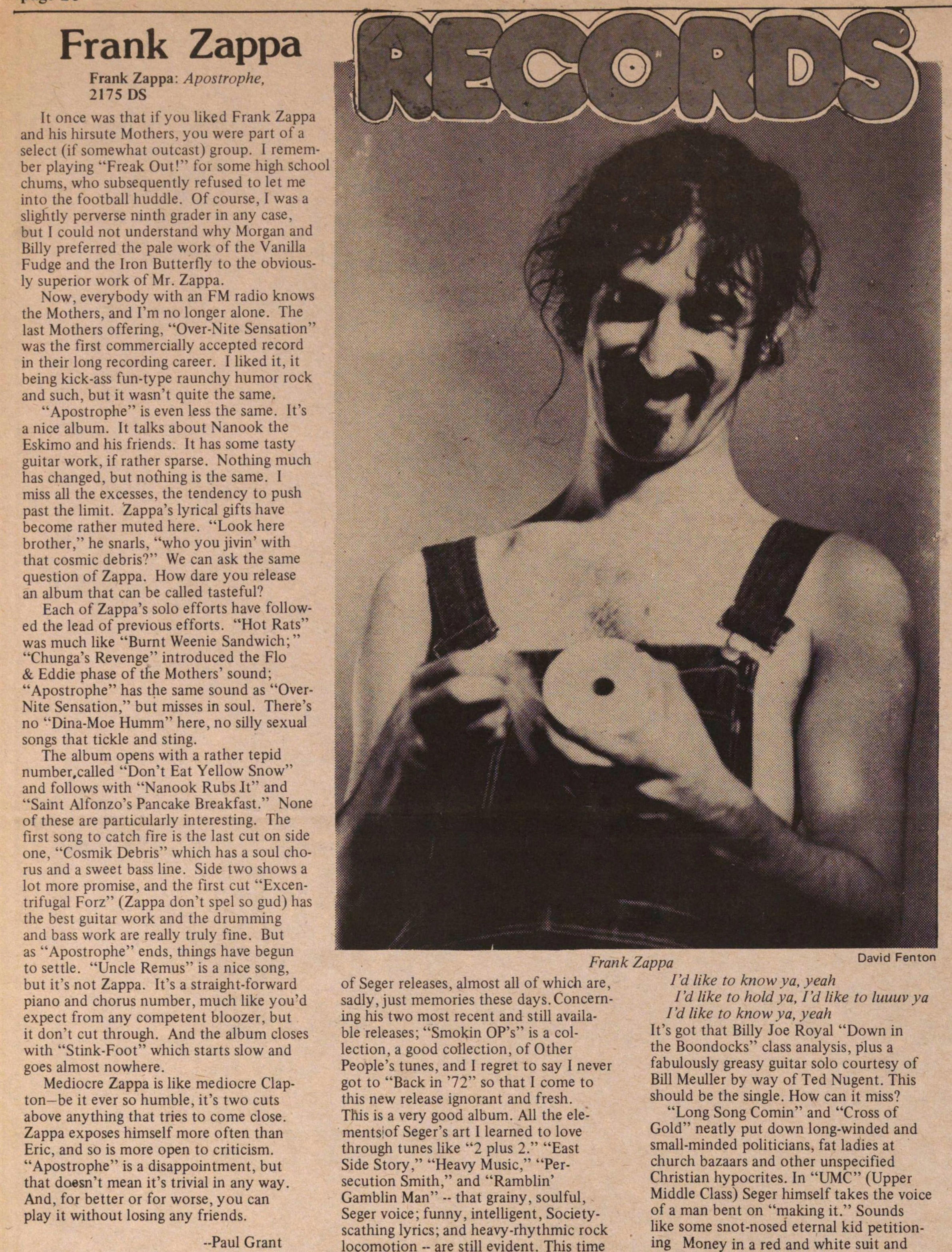 RECORDS
Frank Zappa
Frank Zappa: Apostrophe,
2175 DS
It once was that if you liked Frank Zappa and his hirsute Mothers, you were part of a select (if somewhat outcast) group. I remember playing "Freak Out!" for some high school chums, who subsequently refused to let me into the football huddle. Of course, I was a slightly perverse ninth grader in any case, but I could not understand why Morgan and Billy preferred the pale work of the Vanilla Fudge and the Iron Butterfly to the obviously superior work of Mr. Zappa.
Now, everybody with an FM radio knows the Mothers, and I'm no longer alone. The last Mothers offering, "Over-Nite Sensation" was the first commercially accepted record in their long recording career. I liked it, it being kick-ass fun-type raunchy humor rock and such, but it wasn't quite the same.
"Apostrophe" is even less the same. It's a nice album. It talks about Nanook the Eskimo and his friends. It has some tasty guitar work, if rather sparse. Nothing much has changed, but nothing is the same. I miss all the excesses. the tendency to push past the limit. 'Zappa's lyrical gifts have become rather muted here. "Look here brother," he snarls, "who you jivin' with that cosmic debris?" We can ask the same question of Zappa. How dare you release an album that can be called tasteful?
Each of Zappa's solo efforts have followed the lead of previous efforts. "Hot Rats" was much like "Burnt Weenie Sandwich;" "Chunga's Revenge" introduced the Flo & Eddie phase of the Mothers' sound; "Apostrophe" has the same sound as "Over-Nite Sensation," but misses in soul. There's no "Dina-Moe Humm" here, no silly sexual songs that tickle and sting.
The album opens with a rather tepid number called "Don't Eat Yellow Snow" and follows with "Nanook Rubs It" and "Saint Alfonzo's Pancake Breakfast." None of these are particularly interesting. The first song to catch fire is the last cut on side one, "Cosmik Debris" which has a soul chorus and a sweet bass line. Side two shows a lot more promise, and the first cut "Excentrifugal Forz" (Zappa don't spel so gud) has the best guitar work and the drumming and bass work are really truly fine. But as "Apostrophe" ends, things have begun to settle. "Uncle Remus" is a nice song, but it's not Zappa. It's a straight-forward piano and chorus number, much like you'd expect from any competent bloozer, but it don't cut through. And the album closes with "Stink-Foot" which starts slow and goes almost nowhere.
Mediocre Zappa is like mediocre Clapton- be it ever so humble, it's two cuts above anything that tries to come close. Zappa exposes himself more often than Eric, and so is more open to criticism. "Apostrophe" is a disappointment, but that doesn't mean it's trivial in any way. And, for better or for worse, you can play it without losing any friends.