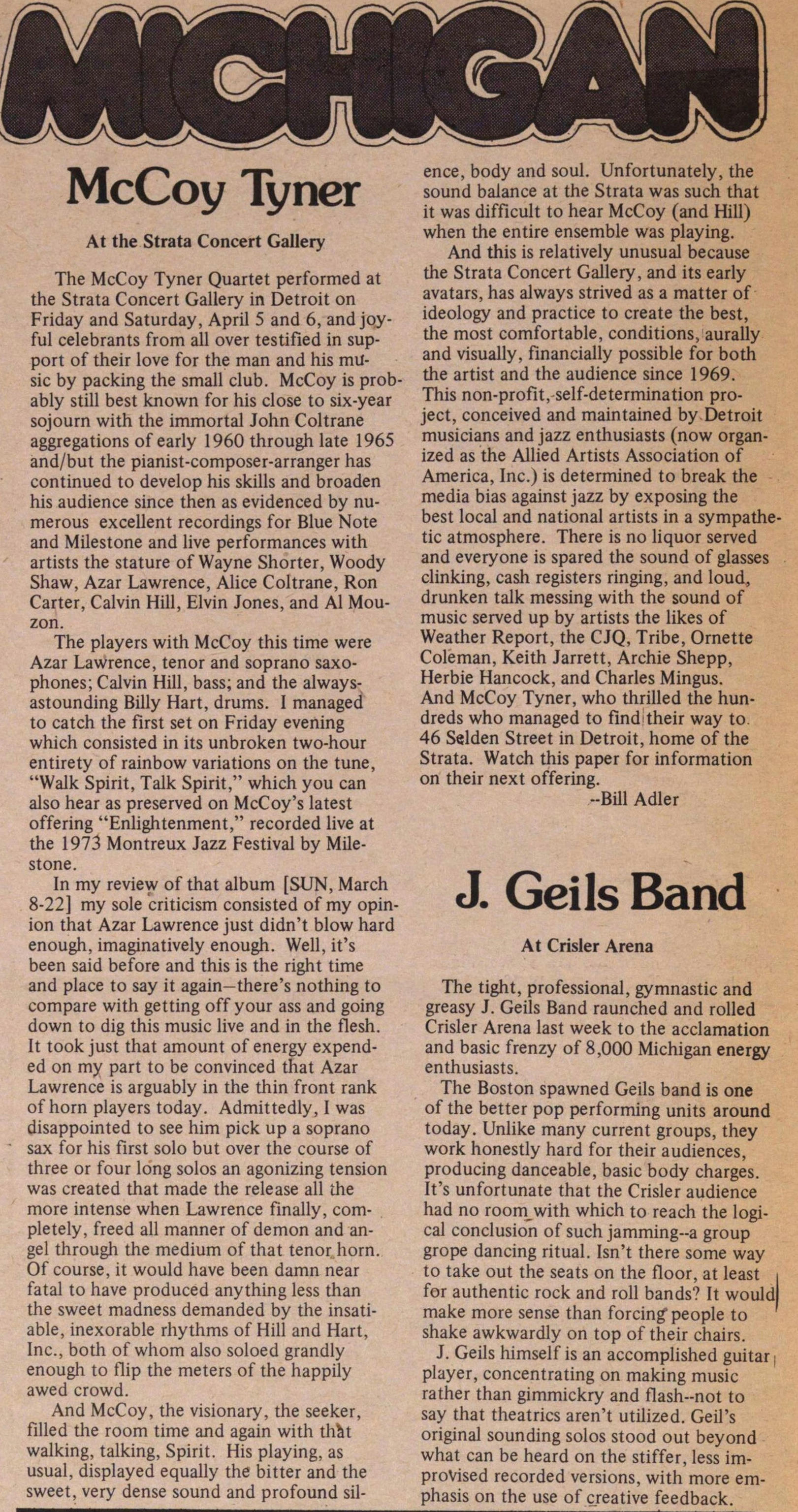 The McCoy Tyner Quartet performed at the Strata Concert Gallery in Detroit on Friday and Saturday, April 5 and 6, and joyful celebrants from all over testified in support of their love for the man and his music by packing the small club. McCoy is prob ably still best known for his close to six-year sojourn with the immortal John Coltrane aggregations of early 1960 through late 1965 and but the pianist-composer-arranger has continued to develop his skills and broaden his audience since then as evidenced by numerous excellent recordings for Blue Note and Milestone and live performances with artists the stature of Wayne Shorter, Woody Shaw, Azar Lawrence, Alice Coltrane, Ron Carter, Calvin HUI, Elvin Jones, and Al Mouzon. The players with McCoy this time were Azar Lawrence, tenor and soprano saxophones; Calvin Hill, bass; and the always astounding Billy Hart, drums. I managed to catch the first set on Friday evening which consisted in its unbroken two-hour entirety of rainbow variations on the tune, "Walk Spirit, Talk Spirit," which you can also hear as preserved on McCoy's latest offering "Enlightenment," recorded live at the 1973 Montreux Jazz Festival by Milestone. In my review of that album [SUN, March 8-22] my sole criticism consisted of my opinion that Azar Lawrence just didn't blow hard enough, imaginatively enough. Well, it's been said before and this is the right time and place to say it again- there's nothing to compare with getting off your ass and going down to dig this music live and in the flesh. It took just that amount of energy expended on my part to be convinced that Azar Lawrence is arguably in the thin front rank of horn players today. Admittedly, I was disappointed to see him pick up a soprano sax for his first solo but over the course of three or four long solos an agonizing tension was created that made the release all the more intense when Lawrence finally, completely, freed all manner of demon and angel through the medium of that tenor horn. Of course, it would have been damn near fatal to have produced anything less than the sweet madness demanded by the insatiable, inexorable rhythms of Hill and Hart, Inc., both of whom also soloed grandly enough to flip the meters of the happily awed crowd. And McCoy, the visionary, the seeker, filled the room time and again with that walking, talking, Spirit. His playing, as usual, displayed equally the bitter and the sweet, very dense sound and profound silence, body and soul. Unfortunately, the sound balance at the Strata was such that it was difficult to hear McCoy (and Hill) when the entire ensemble was playing. And this is relatively unusual because the Strata Concert Gallery, and its early avatars, has always strived as a matter of ideology and practice to create the best, the most comfortable, conditions, aurally and visually, financially possible for both the artist and the audience since 1969. This non-profit, self-determination project, conceived and maintained by Detroit musicians and jazz enthusiasts (now organized as the Allied Artists Association of America, Inc.) is determined to break the media bias against jazz by exposing the best local and national artists in a sympathetic atmosphere. There is no liquor served and everyone is spared the sound of glasses clinking, cash registers ringing, and loud, drunken talk messing with the sound of music served up by artists the likes of Weather Report, the CJQ, Tribe, Ornette Coleman, Keith Jarrett, Archie Shepp, Herbie Hancock, and Charles Mingus. And McCoy Tyner, who thrilled the hundreds who managed to find their way to. 46 Selden Street in Detroit, home of the Strata. Watch this paper for information on their next offering.