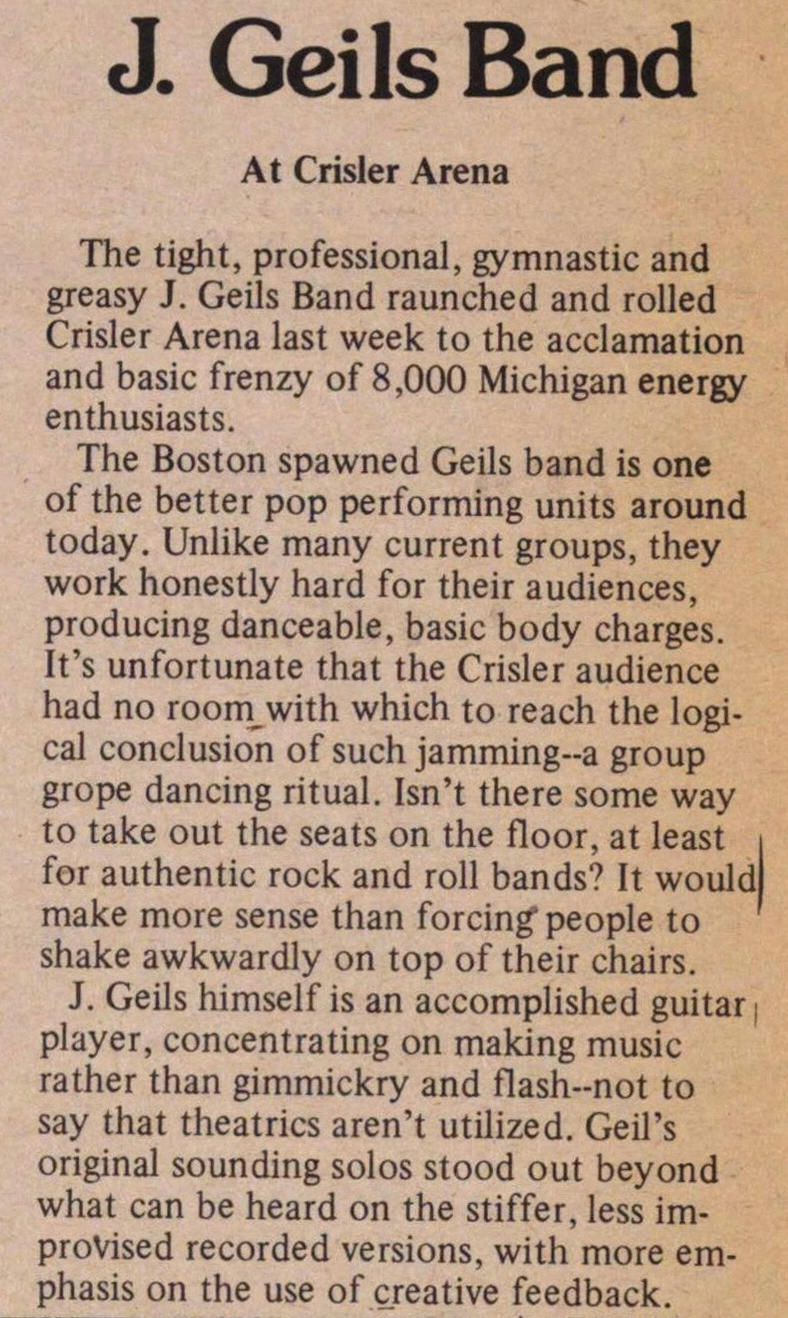 The tight, professional, gymnastic and greasy J. Geils Band raunched and rolled Crisler Arena last week to the acclamation and basic frenzy of 8,000 Michigan energy enthusiasts. The Boston spawned Geils band is one of the better pop performing units around today. Unlike many current groups, they work honestly hard for their audiences, producing danceable, basic body charges. It's unfortunate that the Crisler audience had no room with which to reach the logical conclusion of such jamming-a group grope dancing ritual. Isn't there some way to take out the seats on the floor, at least for authentic rock and roll bands? It would make more sense than forcing people to shake awkwardly on top of their chairs. J. Geils himself is an accomplished guitar player, concentrating on making music rather than gimmickry and flash--not to say that theatrics aren't utilized. Geil's original sounding solos stood out beyond what can be heard on the stiffer, less improvised recorded versions, with more emphasis on the use of creative feedback. As for the rest of the band, the organ and piano player Seth Justman is an accomplished craftsman, Danny Klein ("a swell guy") pumps out the basic pulsations, Stephen Bladd kicks along on drums, with wildman Magie Dick blowin' yer face out on hard harp while the irascible Peter Wolf struts about projecting lead vocals. The combination cooks, breaking all hell loose in peak moments. Of course the lyrics are sexist. The band is best known for their high energy numbers, inspired as they were originally by the classic series of Atlantic rhythm and blues oldies. But at Crisler Geils proved equal to thickly arranged, slower songs, including a resounding, almost orchestra like version of "I Hear the Chimes." Unfortunately, the opening band, Nils Lofgren with Grin, succeeded in dousing out any enthusiasm at first with a repertoire of clunky cliched music that the band erroneously referred to as "rock and roll." It may be rock, but there was no roll to speak of, only the monotonous drone of some obviously ego-tripping pop stars who have deluded themselves into popularity by cheaply imitating Jeff Beek and chewing strings a la Hendrix. One of the better local bands, the Rockets, was originally scheduled to open the show, but were forced to cancel by a monopolistic East Coast booking agency which insisted that Grin accompany Geils or there would be no show. It's a typical industry move, the effect of which is to shut out local talent from performing in front of the large crowds many of them deserve. One other Geils note. Before one song someone threw Peter Wolf a thickly -rolled joint. Reflecting on the new $5 weed law which takes effect May 1st, Wolf lit the number announcing. "this is a first for us."