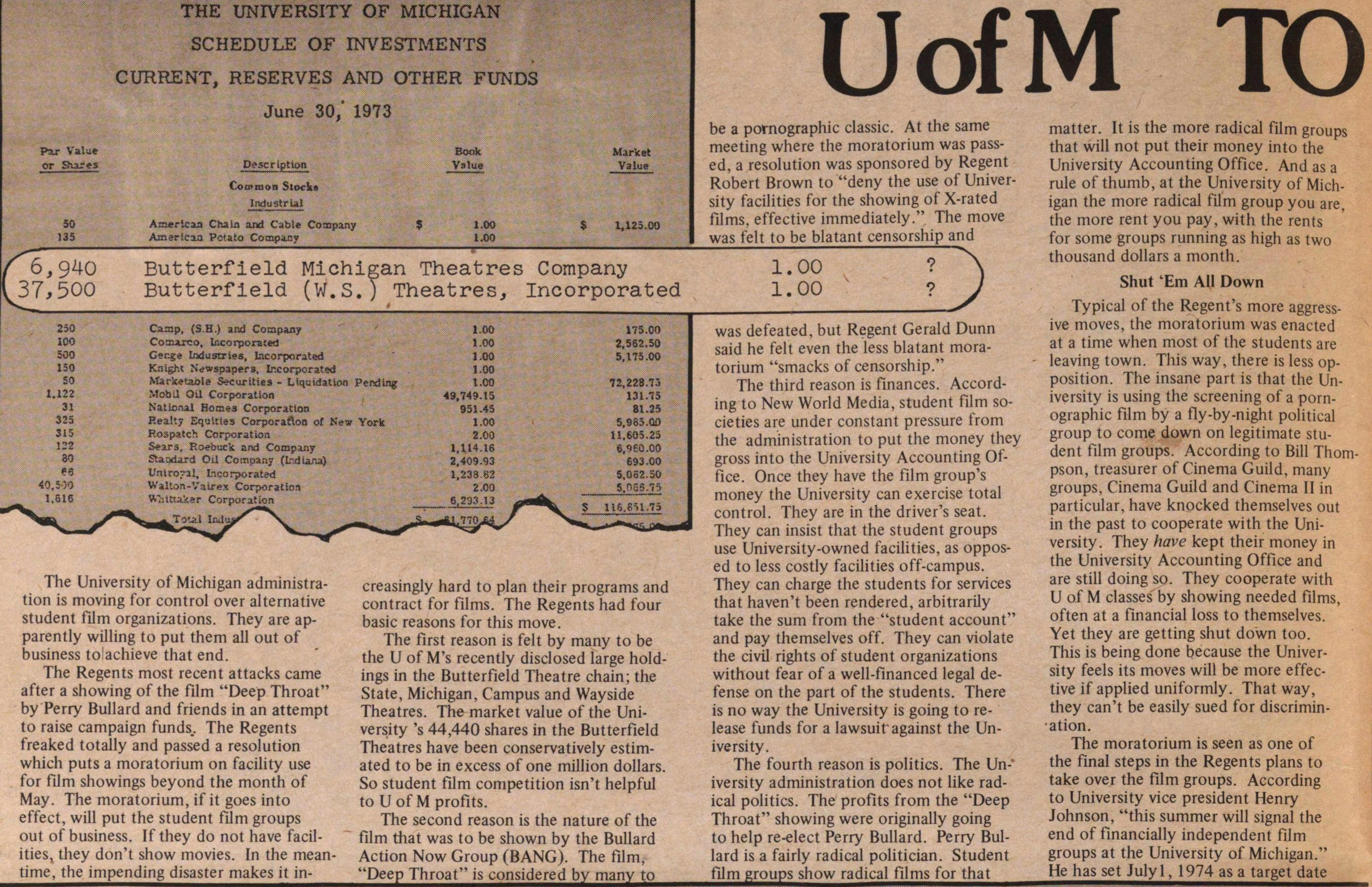 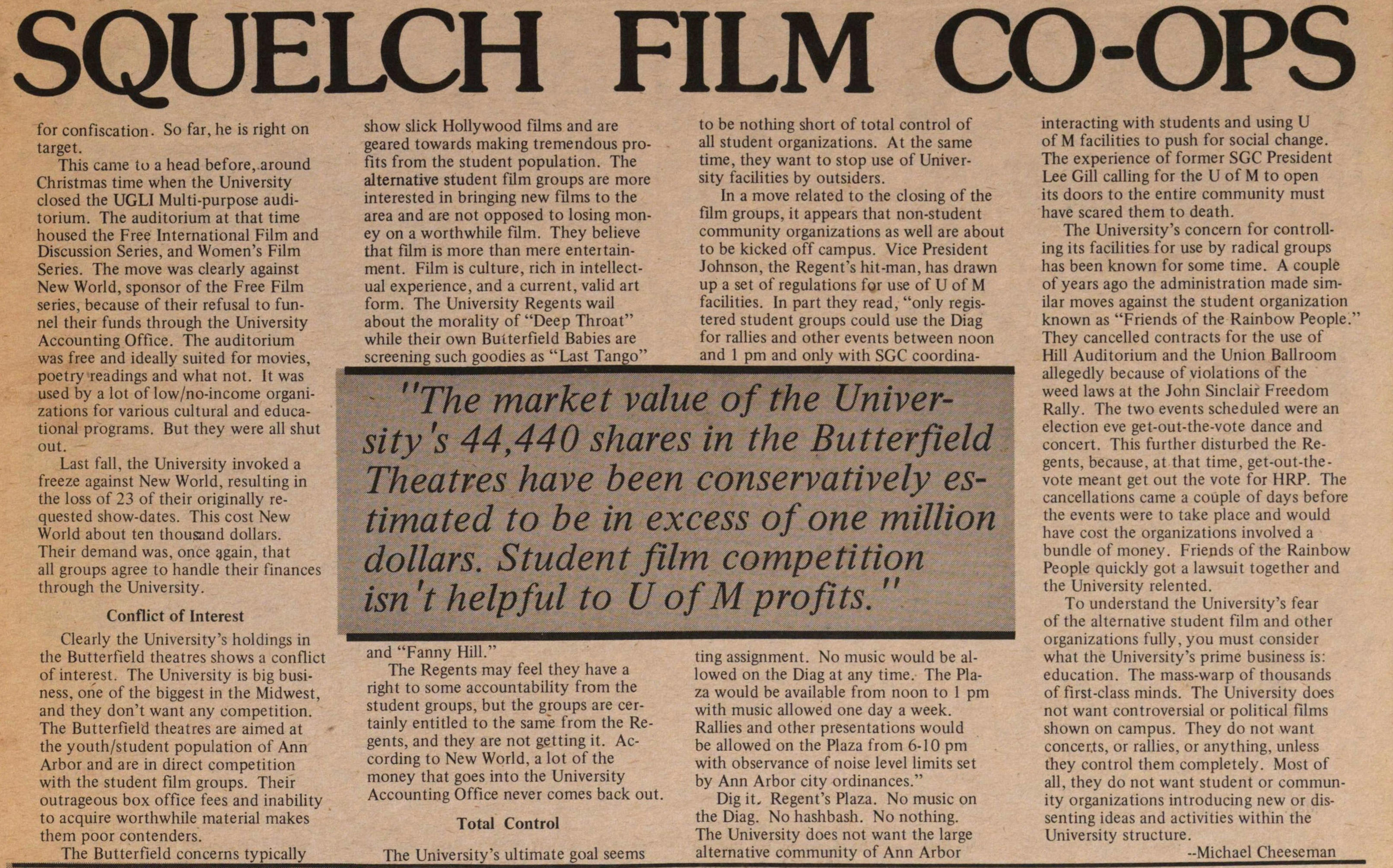 The University of Michigan administration is moving for control over alternative student film organizations. They are apparently willing to put them all out of business to achieve that end.

The Regents most recent attacks came after a showing of the film "Deep Throat" by Perry Bullard and friends in an attempt to raise campaign funds.. The Regents freaked totally and passed a resolution which puts a moratorium on facility use for film showings beyond the month of May. The moratorium, if it goes into effect, will put the student film groups out of business. If they do not have facilities, they don't show movies. In the meantime, the impending disaster makes it increasingly hard to plan their programs and contract for films. The Regents had four basic reasons for this move.

The first reason is felt by many to be the U of M's recently disclosed large holdings in the Butterfield Theatre chain; the State, Michigan, Campus and Wayside Theatres. The market value of the University 's 44,440 shares in the Butterfield Theatres have been conservatively estimated to be in excess of one million dollars. So student film competition isn't helpful to U of M profits.

The second reason is the nature of the film that was to be shown by the Bullard Action Now Group (BANG). The film, "Deep Throat" is considered by many to be a pornographic classic. At the same meeting where the moratorium was passed, a resolution was sponsored by Regent Robert Brown to "deny the use of University facilities for the showing of X-rated films, effective immediately." The move was felt to be blatant censorship and was defeated, but Regent Gerald Dunn said he feit even the less blatant moratorium "smacks of censorship."

The third reason is finances. According to New World Media, student film societies are under constant pressure from the administration to put the money they gross into the University Accounting Office. Once they have the film group's money the University can exercise total control. They are in the driver's seat. They can insist that the student groups use University-owned facilities, as opposed to less costly facilities off-campus. They can charge the students for services that haven't been rendered, arbitrarily take the sum from the "student account" and pay themselves off. They can violate the civil rights of student organizations without fear of a well-financed legal defense on the part of the students. There is no way the University is going to release funds for a lawsuit against the University.

It is the more radical film groups that will not put their money into the University Accounting Office. And as a rule of thumb, at the University of Michigan the more radical film group you are, the more rent you pay, with the rents for some groups running as high as two thousand dollars a month. Shut 'Em All Down Typical of the Regent's more aggressive moves, the moratorium was enacted at a time when most of the students are leaving town. This way, there is less opposition. The insane part is that the University is using the screening of a pornographic film by a fly-by-night political group to come down on legitimate student film groups. According to Bill Thompson, treasurer of Cinema Guild, many groups, Cinema Guild and Cinema II in particular, have knocked themselves out in the past to cooperate with the University. They have kept their money in the University Accounting Office and are still doing so. They cooperate with U of M classes by showing needed films, often at a financial loss to themselves. Yet they are getting shut down too. This is being done because the University feels its moves will be more effective if applied uniformly . That way, they can't be easily sued for discrimination. The moratorium is seen as one of the final steps in the Regents plans to take over the film groups. According to University vice president Henry Johnson, "this summer will signal the end of financially independent film groups at the University of Michigan." He has set July 1 , 1974 as a target date for confiscation. So far, he is right on target.

This came to a head before, around Christmas time when the University closed the UGLI Multi-purpose auditorium. The auditorium at that time housed the Free International Film and Discussion Series, and Women's Film Series. The move was clearly against New World, sponsor of the Free Film series, because of their refusal to funnel their funds through the University Accounting Office. The auditorium was free and ideally suited for movies, poetry readings and what not. It was used by a lot of low no-income organizations for various cultural and educational programs. But they were all shut out.

Last fall, the University invoked a freeze against New World, resulting in the loss of 23 of their originally requested show-dates. This cost New World about ten thousand dollars. Their demand was, once again, that all groups agree to handle their finances through the University.

Clearly the University's holdings in the Butterfield theatres shows a conflict of interest. The University is big business, one of the biggest in the Midwest, and they don't want any competition. The Butterfield theatres are aimed at the youth student population of Ann Arbor and are in direct competition with the student film groups. Their outrageous box office fees and inability to acquire worthwhile material makes them poor contenders.

The Butterfield concerns typically show slick Hollywood films and are geared towards making tremendous profits from the student population. The alternative student film groups are more interested in bringing new films to the area and are not opposed to losing money on a worthwhile film. They believe that film is more than mere entertainment. Film is culture, rich in intellectual experience, and a current, valid art form. The University Regents wail about the morality of "Deep Throat" while their own Butterfield Babies are screening such goodies as "Lust Tango" and "Fanny Hill."

The Regents may feel they have a right to some accountability from the student groups, but the groups are certainly entitled to the same from the Regents, and they are not getting it. According to New World, a lot of the money that goes into the University Accounting Office never comes back out.

The University's ultimate goal seems to be nothing short of total control of all student organizations. At the same time, they want to stop use of University facilities by outsiders.

In a move related to the closing of the film groups, it appears that non-student community organizations as well are about to be kicked off campus. Vice President Johnson, the Regent's hit-man, has drawn up a set of regulations for use of U of M facilities. In part they read, "only registered student groups could use the Diag for rallies and other events between noon and 1 pm and only with SGC coordinating assignment. No music would be allowed on the Diag at any time. The Plaza would be available from noon to 1 pm with music allowed one day a week. Rallies and other presentations would be allowed on the Plaza from 6-10 pm with observance of noise level limits set by Ann Arbor city ordinances."

Dig it. Regent's Plaza. No music on the Diag. No hashbash. No nothing. The University does not want the large alternative community of Ann Arbor interacting with students and using U of M facilities to push for social change. The experience of former SGC President Lee Gill calling for the U of M to open its doors to the entire community must have scared them to death.

The University's concern for controlling its facilities for use by radical groups has been known for some time. A couple of years ago the administration made similar moves against the student organization known as "Friends of the Rainbow People." They cancelled contracts for the use of Hill Auditorium and the Union Ballroom allegedly because of violations of the weed laws at the John Sinclair Freedom Rally. The two events scheduled were an election eve get-out-the-vote dance and concert. This further disturbed the Regents, because, at that time, get-out-the vote meant get out the vote for HRP. The cancellations came a couple of days before the events were to take place and would have cost the organizations involved a bundle of money. Friends of the Rainbow People quickly got a lawsuit together and the University relented.