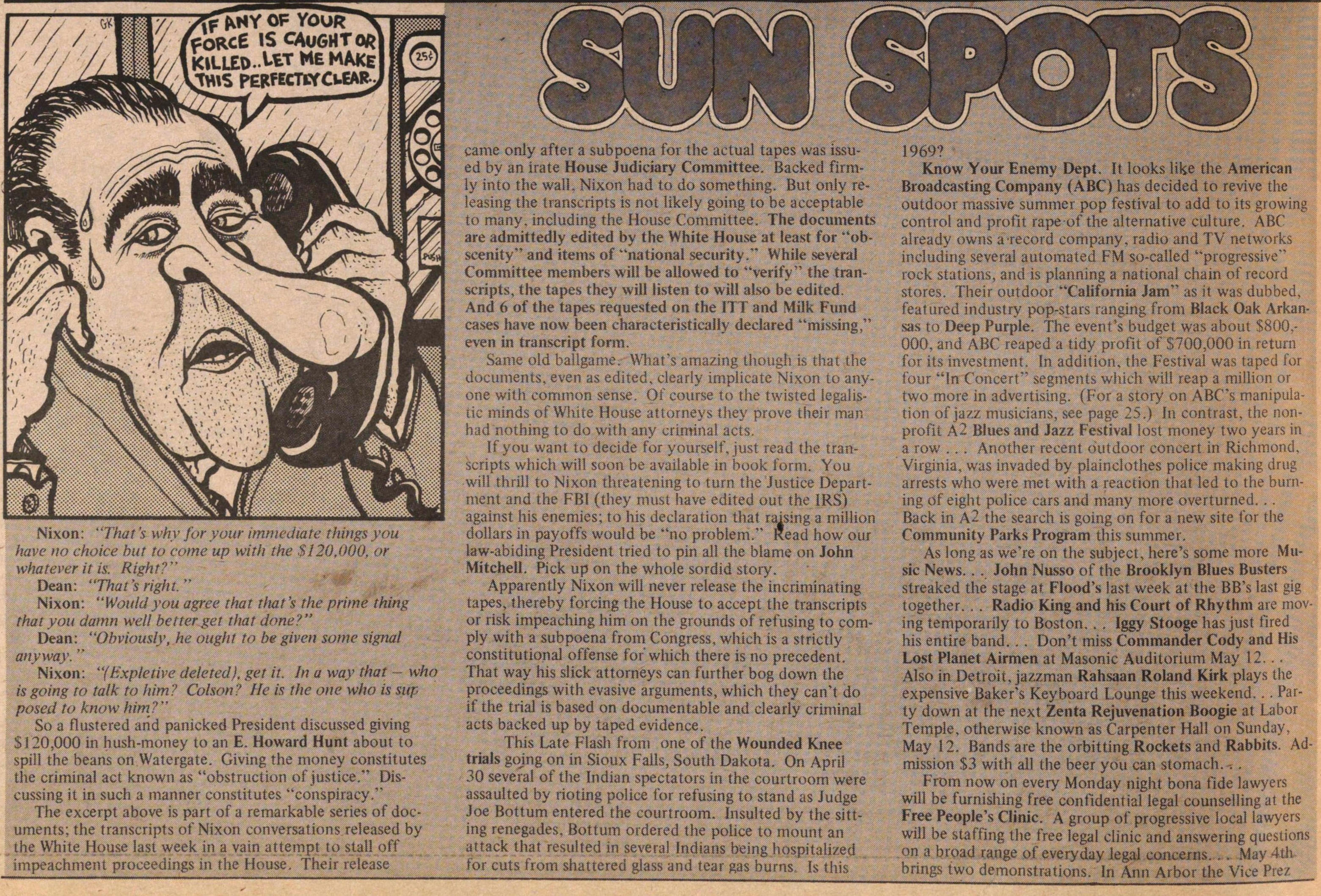 Nixon: "Would you agree that that's the prime thing that you damn well better get that done?"

Dean: "Obviously, he ought to be given same signal anyway."

Nixon: "(Expletive deleted), get it. In a way that - who is going to talk to him? Colson? He is the one who is supposed to know him?"

So a flustered and panicked President discussed giving $120,000 in hush-money to an E. Howard Hunt about to spill the beans on Watergate. Giving the money constitutes the criminal act known as "obstruction of justice." Discussing it in such a manner constitutes "conspiracy."

The excerpt above is part of a remarkable series of documents: the transcripts of Nixon conversations released by the White House last week in a vain attempt to stall off impeachment proceedings in the House. Their release came only after a subpoena for the actual tapes was issued by an irate House Judiciary Committee. Backed firmly into the wall, Nixon had to do something. But only releasing the transcripts is not likely going to be acceptable to many. including the House Committee. The documents are admittedly edited by the White House at least for "obscenity" and items of "national security." While several Committee members will be allowed to "verify" the transcripts, the tapes they will listen to will also be edited. And 6 of the tapes requested on the ITT and Milk Fund cases have now been characteristically declared "missing," even in transcript form.

Same old ballgame. What's amazing though is that the documents. even as edited, clearly implicate Nixon to anyone with common sense. Of course to the twisted legalistic minds of White House attorneys they prove their man had nothing to do with any criminal acts.

If you want to decide for yourself, just read the transcripts which will soon be available in book form. You will thrill to Nixon threatening to turn the Justice Department and the FBI (they must have edited out the IRS) against his enemies; to his declaration that raising a million dollars in payoffs would be "no problem." Read how our law-abiding President tried to pin all the blame on John Mitchell. Pick up on the whole sordid story.

Apparently Nixon will never release the incriminating tapes, thereby forcing the House to accept the transcripts or risk impeaching him on the grounds of refusing to comply with a subpoena from Congress, which is a strictly constitutional offense for which there is no precedent. That way his slick attorneys can further bog down the proceedings with evasive arguments, which they can't do if the trial is based on documentable and clearly criminal acts backed up by taped evidence.

This Late Flash from one of the Wounded Knee trials going on in Sioux Falls, South Dakota. On April 30 several of the Indian spectators in the courtroom were assaulted by rioting police for refusing to stand as Judge Joe Bottum entered the courtroom. Insulted by the sitting renegades, Bottum ordered the police to mount an attack that resulted in several Indians being hospitalized for cuts from shattered glass and tear gas burns: Is this 1969?

Know Your Enemy Dept. It looks like the American Broadcasting Company (ABC) has decided to revive the outdoor massive summer pop festival to add to its growing control and profit rape of the alternative culture. ABC already owns a record company, radio and TV networks including several automated FM so-called "progressive" rock stations, and is planning a national chain of record stores. Their outdoor "California Jam" as it was dubbed, featured industry pop-stars ranging from Black Oak Arkansas to Deep Purple. The event's budget was about $800,000, and ABC reaped a tidy profit of $700,000 in return for its investment. In addition, the Festival was taped for four "In Concert" segments which will reap a million or two more in advertising. (For a story on ABCs manipulation of jazz musicians, see page 25.) In contrast, the nonprofit A2 Blues and Jazz Festival lost money two years in a row . . . Another recent outdoor concert in Richmond, Virginia, was invaded by plainclothes police making drug arrests who were met with a reaction that led to the burning of eight police cars and many more overturned. . . Back in A2 the search is going on for a new site for the Community Parks Program this summer.

As long as we're on the subject, here's some more Music News. . . John Nusso of the Brooklyn Blues Busters streaked the stage at Flood's last week at the BB's last gig together. . . Radio King and his Court of Rhythm are moving temporarily to Boston. . . Iggy Stooge has just fired his entire band. . . Don't miss Commander Cody and His Lost Planet Airmen at Masonic Auditorium May 12... Also in Detroit, jazzman Rahsaan Roland Kirk plays the expensive Baker's Keyboard Lounge this weekend. . . Party down at the next Zenta Rejuvenation Boogie at Labor Temple, otherwise known as Carpenter Hall on Sunday, May 12. Bands are the orbiting Rockets and Rabbits. Admission $3 with all the beer you can stomach. -. .

From now on every Monday night bonafide lawyers will be furnishing free confidential legal counselling at the Free People's Clinic. A group of progressive local lawyers will be staffing the free legal clinic and answering questions on a broad range of every day legal concerns. . . May 4th brings two demonstrations. In Ann Arbor the Vice Prez our Ford is coming to babble at the U of M commencement proceedings. The demo starts at 8:30 a.m. at Crisler Arena. And in Kent, Ohio, people will gather to commemorate the 4th anniversary of the Kent and Jackson State murders with Daniel Ellsberg, Julian Bond, Jane Fonda and Judy Collins... The national Gay Liberation Conference begins in Ann Arbor May 10. See page 5 for a schedule of its activities... The American Red Cross is offering a canoeing course . Sessions will run May 5 through 10 in the early evenings at the Argo Park Canoe Livery at the foot of Longshore Drive. There is no charge, but enrollment is limited. To register call the Red Cross at 971-5300.

The Michigan Bell Telephone Corp, Consolidated Edison and Consumers Power have all asked the state Public Service Commission their largest rate hikes in history. Bell, for one, is asking for 60 million more in operating costs matched by $60 million more in profits. The Public Service Commission of course is dominated by Republican industry sympathizers... This means the average cost of monopoly telephone service charges will jump from $1.35 to $1.80.

As for the state of the SUN, this is our third anniversary issue. It's also our longest - 32 pages. To keep fueling our expansion the SUN has decided to raise its price beginning next issue to 25 cents per copy in Ann Arbor. This is also being done to meet fast-escalating printing, production and every other kind of bills, and also to enable at least some of our staff to collect subsistence salaries for their work...

The next SUN will be out Friday, May 17th, featuring; An Interview with Allen Ginsberg, The FBI Attacks the Panthers, part II, ITT's Aid to Nazis and Fascists, Mass Transportation in A2, Horrible Herpes, Women in Medicine, Part II