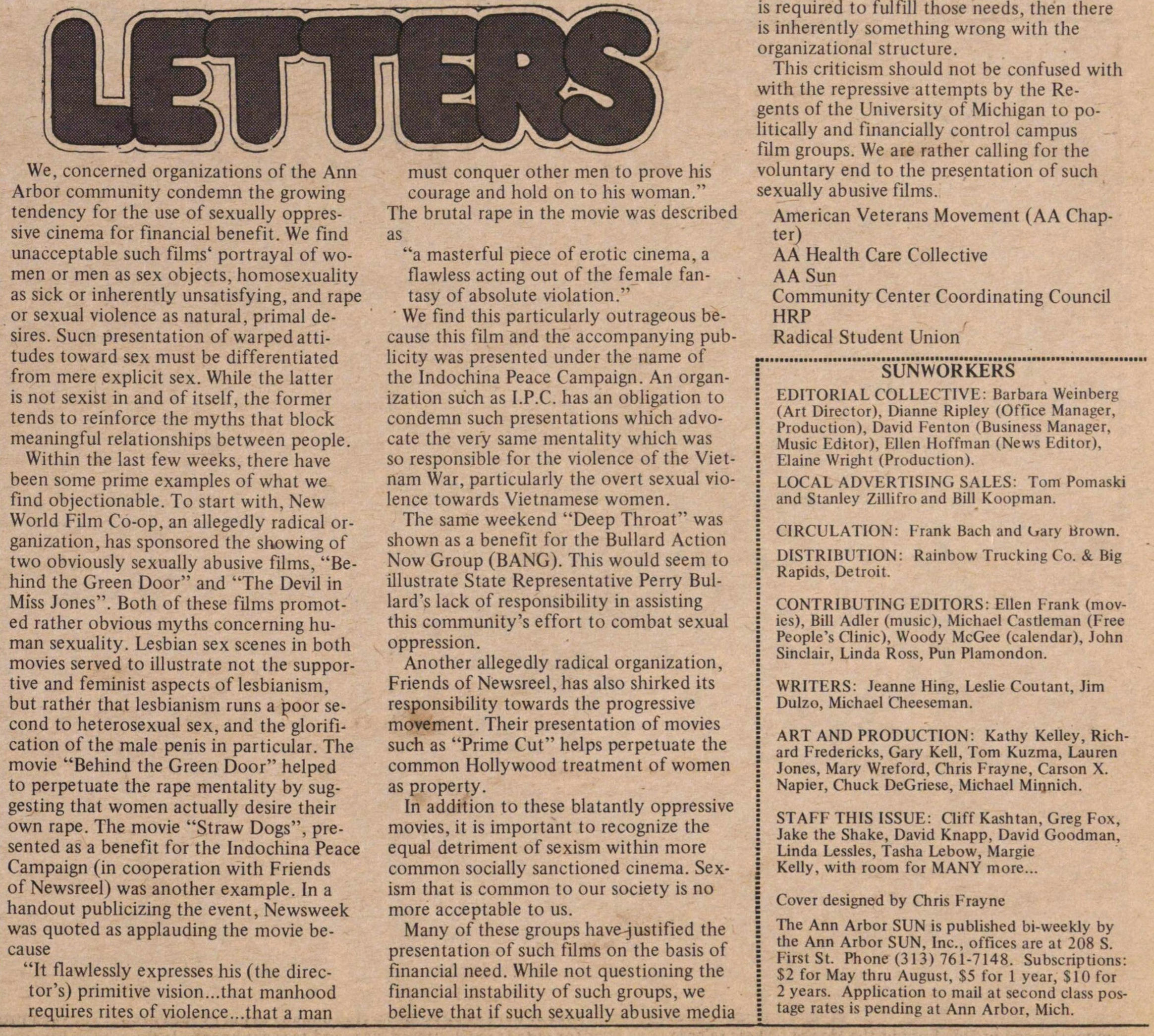 We, concerned organizations of the Ann Arbor community condemn the growing tendency for the use of sexually oppressive cinema for financial benefit. We find unacceptable such films' portrayal of women or men as sex objects, homosexuality as sick or inherently unsatisfying, and rape or sexual violence as natural, primal desires. Such presentation of warped attitudes toward sex must be differentiated from mere explicit sex. While the latter is not sexist in and of itself, the former tends to reinforce the myths that block meaningful relationships between people.

Within the last few weeks, there have been some prime examples of what we find objectionable. To start with, New World Film Co-op, an allegedly radical organization, has sponsored the showing of two obviously sexually abusive films, "Behind the Green Door" and "The Devil in Miss Jones". Both of these films promoted rather obvious myths concerning human sexuality. Lesbian sex scenes in both movies served to illustrate not the supportive and feminist aspects of lesbianism, but rather that lesbianism runs a poor second to heterosexual sex, and the glorification of the male penis in particular. The movie "Behind the Green Door" helped to perpetuate the rape mentality by suggesting that women actually desire their own rape. The movie "Straw Dogs", presented as a benefit for the Indochina Peace Campaign (in cooperation with Friends of Newsreel) was another example. In a handout publicizing the event, Newsweek was quoted as applauding the movie because

"It flawlessly expresses his (the director's) primitive vision. ..that manhood requires rites of violence. ..that a man must conquer other men to prove his courage and hold on to his woman."

The brutal rape in the movie was described as

We find this particularly outrageous because this film and the accompanying publicity was presented under the name of the Indochina Peace Campaign. An organization such as I.P.C. has an obligation to condemn such presentations which advocate the very same mentality which was so responsible for the violence of the Vietnam War, particularly the overt sexual violence towards Vietnamese women.

The same weekend "Deep Throat" was shown as a benefit for the Bullard Action Now Group (BANG). This would seem to illustrate State Representative Perry Bullard's lack of responsibility in assisting this community's effort to combat sexual oppression.

Another allegedly radical organization, Friends of Newsreel, has also shirked its responsibility towards the progressive movement. Their presentation of movies such as "Prime Cut" helps perpetuate the common Hollywood treatment of women as property.

In addition to these blatantly oppressive movies, it is important to recognize the equal detriment of sexism within more common socially sanctioned cinema. Sexism that is common to our society is no more acceptable to us.

Many of these groups have justified the presentation of such films on the basis of financial need. While not questioning the financial instability of such groups, we believe that if such sexually abusive media is required to fulfill those needs, then there is inherently something wrong with the organizational structure.

This criticism should not be confused with with the repressive attempts by the Regents of the University of Michigan to politically and financially control campus film groups. We are rather calling for the voluntary end to the presentation of such sexually abusive films.