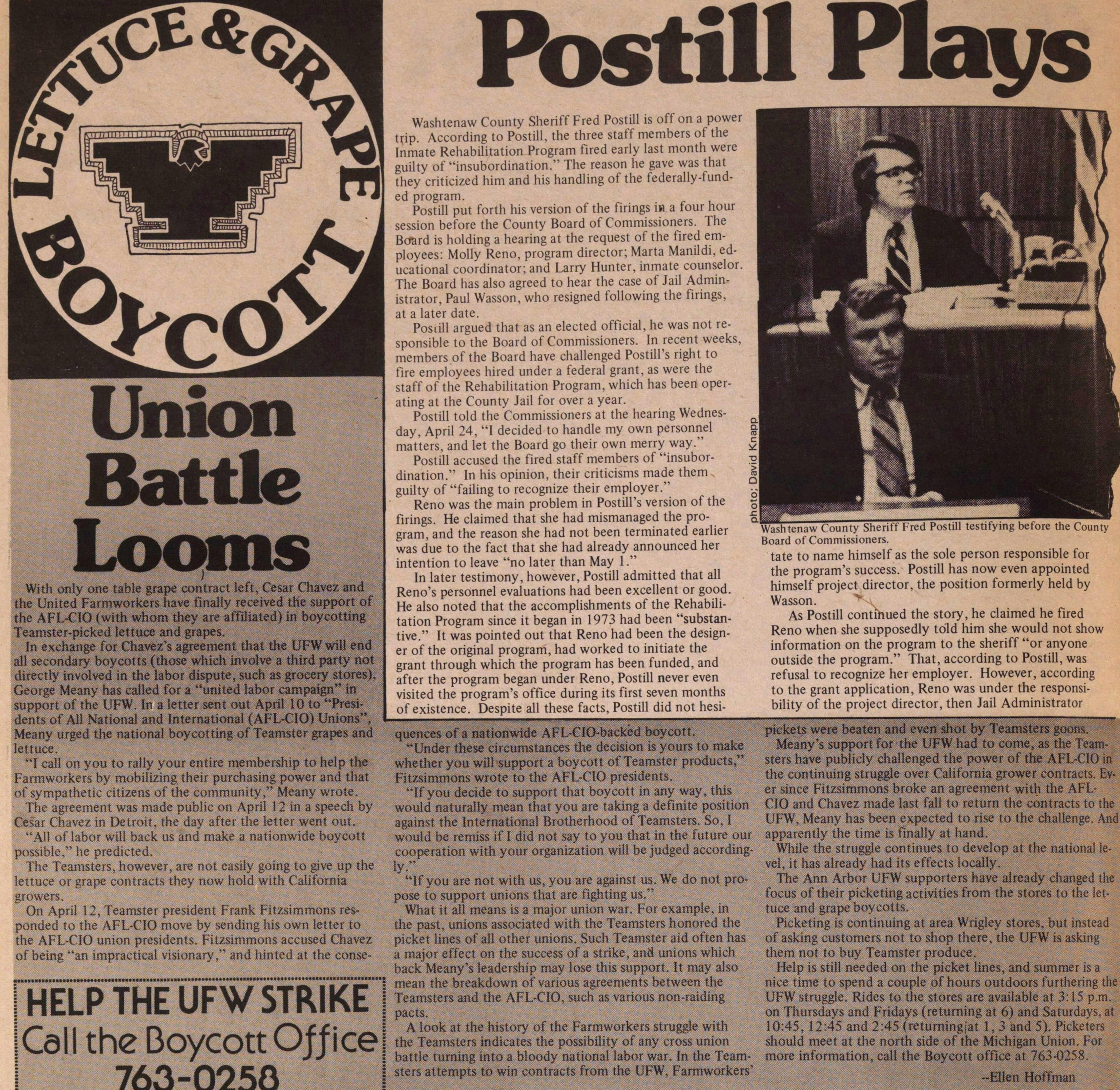 With only one table grape contract left, Cesar Chavez and the United Farmworkers have finally received the support of the AFL-CIO (with whom they are affiliated) in boycotting Teamster-picked lettuce and grapes.

In exchange for Chavez's agreement that the UFW will end all secondary boycotts (those which involve a third party not directly involved in the labor dispute, such as grocery stores), George Meany has called for a "united labor campaign" in support of the UFW. In a letter sent out April 10 to "Presidents of All National and International (AFL-CIO) Unions", Meany urged the national boycotting of Teamster grapes and lettuce.

"I call on you to rally your entire membership to help the Farmworkers by mobilizing their purchasing power and that of sympathetic citizens of the community," Meany wrote.

The agreement was made public on April 12 in a speech by Cesar Chavez in Detroit, the day after the letter went out.

"All of labor will back us and make a nationwide boycott possible." he predicted.

The Teamsters, however, are not easily going to give up the lettuce or grape contracts they now hold with California growers.

On April 12, Teamster president Frank Fitzsimmons responded to the AFL-CIO move by sending his own letter to the AFL-CIO union presidents. Fitzsimmons accused Chavez of being "an impractical visionary," and hinted at the consequences of a nationwide AFL-CIO-backed boycott.

"Under these circumstances the decision is yours to make whether you will support a boycott of Teamster products," Fitzsimmorts wrote to the AFL-CIO presidents.

"If you decide to support that boycott in any way, this would naturally mean that you are taking a definite position against the International Brotherhood of Teamsters. So, I would be remiss if I did not say to you that in the future our cooperation with your organization will be judged accordingly."

"If you are not with us, you are against us. We do not propose to support unions that are fighting us."

What it all means is a major union war. For example, in the past, unions associated with the Teamsters honored the picket lines of all other unions. Such Teamster aid often has a major effect on the success of a strike, and unions which back Meany's leadership may lose this support. It may also mean the breakdown of various agreements between the Teamsters and the AFL-CIO, such as various non-raiding pacts.

A look at the history of the Farmworkers struggle with the Teamsters indicates the possibility of any cross union battle turning into a bloody national labor war. In the Teamsters attempts to win contracts from the UFW, Farmworkers' pickets were beaten and even shot by Teamsters goons.

Meany's support for the UFW had to come, as the Teamsters have publicly challenged the power of the AFL-CIO in the continuing struggle over California grower contracts. Ever since Fitzsimmons broke an agreement with the AFL-CIO and Chavez made last fall to return the contracts to the UFW, Meany has been expected to rise to the challenge. And apparently the time is finally at hand.

While the struggle continues to develop at the national level, it has already had its effects locally.

The Ann Arbor UFW supporters have already changed the focus of their picketing activities from the stores to the lettuce and grape boycotts.

Picketing is continuing at area Wrigley stores, but instead of asking customers not to shop there, the UFW is asking them not to buy Teamster produce.

Help is still needed on the picket lines, and summer is a nice time to spend a couple of hours outdoors furthering the UFW struggle. Rides to the stores are available at 3:15 p.m. on Thursdays and Fridays (returning at 6) and Saturdays, at 10:45, 12:45 and 2:45 (returning at 1, 3 and 5). Picketers should meet at the north side of the Michigan Union. For more information, call the Boycott office at 763-0258. - Ellen Hoffman