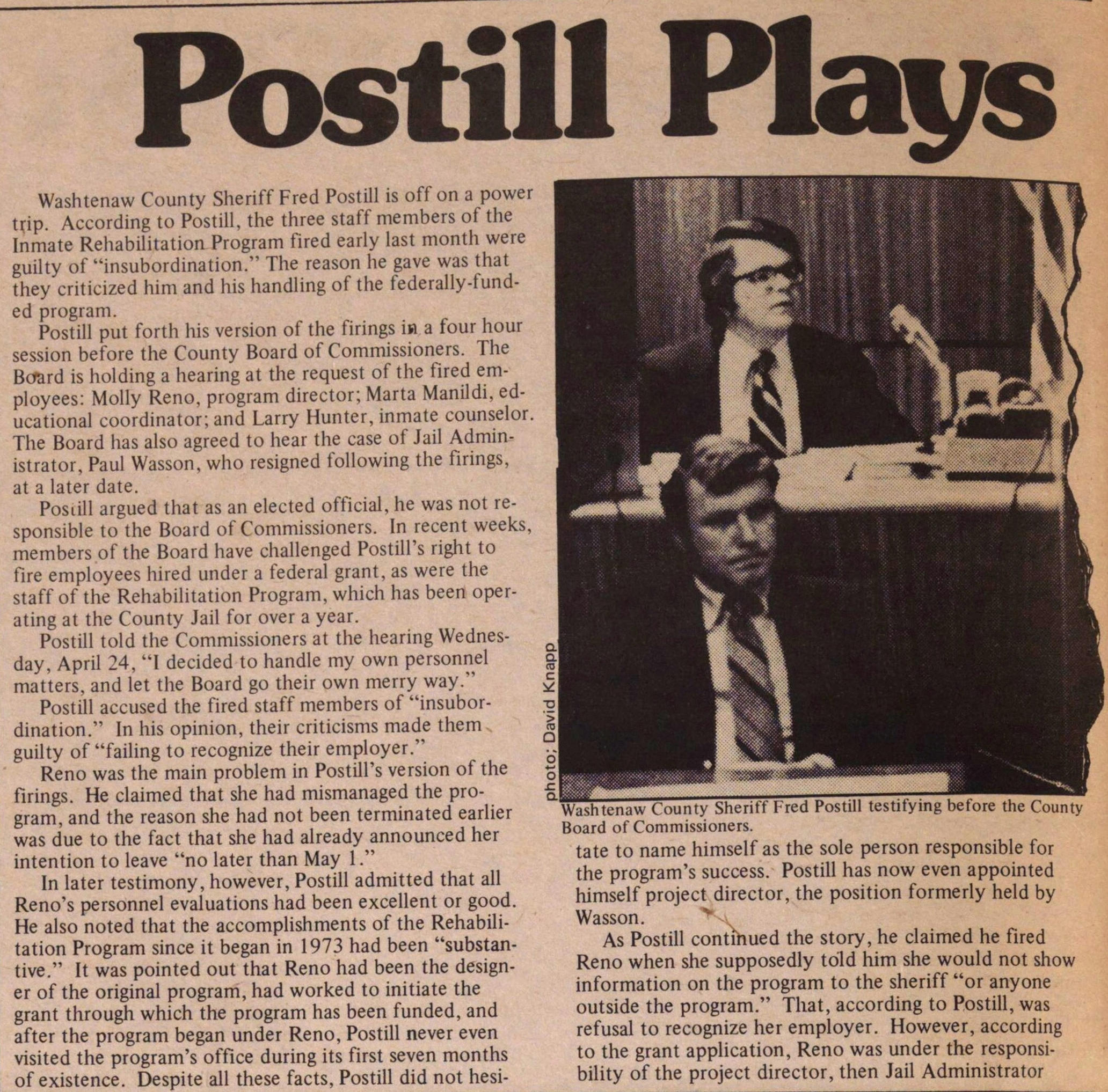 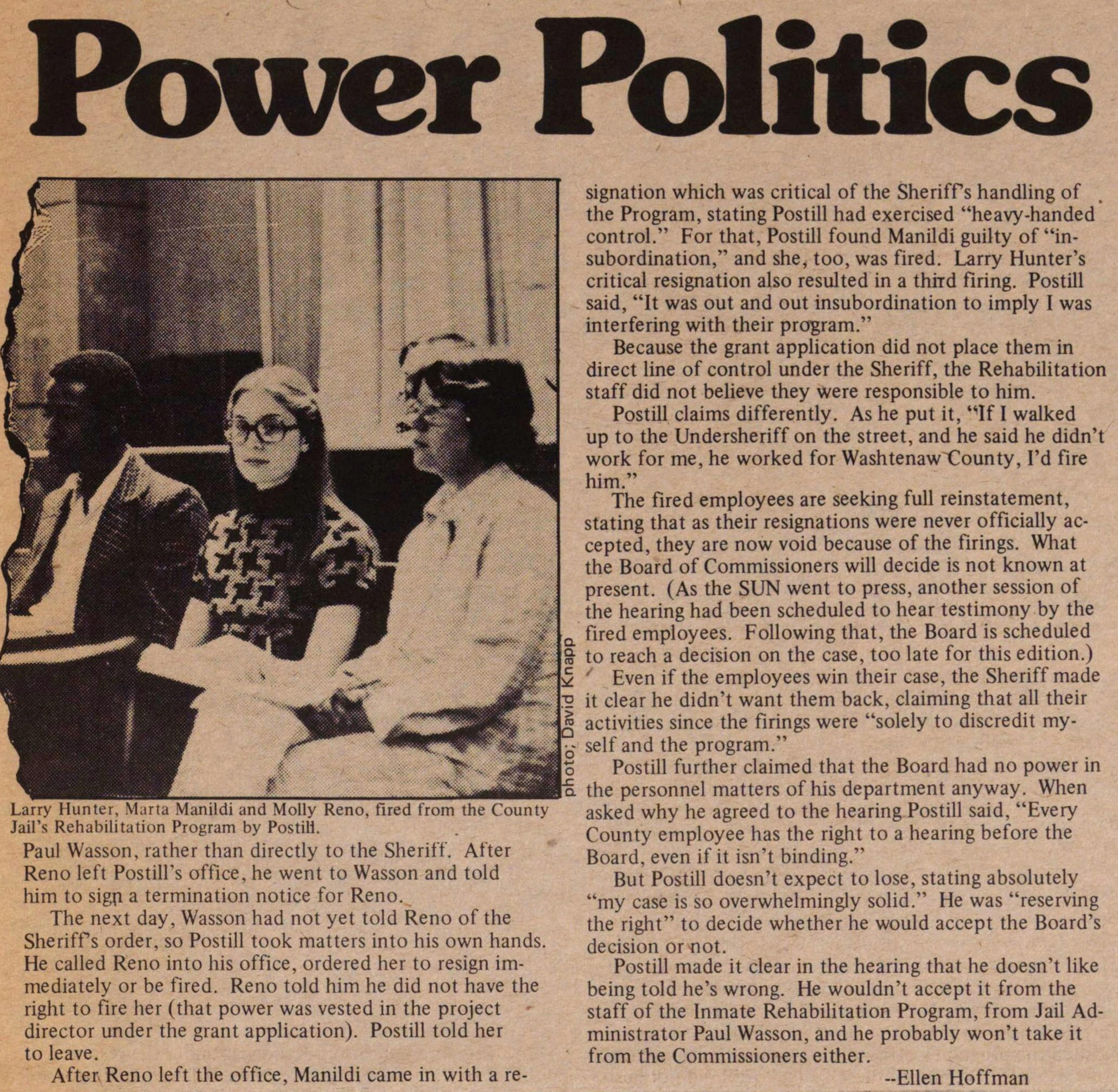 Washtenaw County Sheriff Fred Postill is off on a power trip. According to Postill, the three staff members of the Inmate Rehabilitation Program fired early last month were guilty of "insubordination." The reason he gave was that they criticized him and his handling of the federally-funded program.

Postill put forth his version of the firings in a four hour session before the County Board of Commissioners. The Board is holding a hearing at the request of the fired employees: Molly Reno, program director; Marta Manildi, educational coordinator; and Larry Hunter, inmate counselor. The Board has also agreed to hear the case of Jail Administrator, Paul Wasson, who resigned following the firings, at a later date.

Postill argued that as an elected official, he was not responsible to the Board of Commissioners. In recent weeks, members of the Board have challenged Postill's right to fire employees hired under a federal grant, as were the staff of the Rehabilitation Program, which has been operating at the County Jail for over a year.

Postill told the Commissioners at the hearing Wednesday, April 24, "I decided to handle my own personnel matters, and let the Board go their own merry way."

Postill accused the fired staff members of "insubordination." In his opinion, their criticisms made them guilty of "failing to recognize their employer."

Reno was the main problem in Postill's version of the firings. He claimed that she had mismanaged the program, and the reason she had not been terminated earlier was due to the fact that she had already announced her intention to leave "no later than May 1."

In later testimony, however, Postill admitted that all Reno's personnel evaluations had been excellent or good. He also noted that the accomplishments of the Rehabilitation Program since it began in 1973 had been "substantive." It was pointed out that Reno had been the designer of the original program, had worked to initiate the grant through which the program has been funded, and after the program began under Reno, Postill never even visited the program's office during its first seven months of existence. Despite all these facts, Postill did not hesitate to name himself as the sole person responsible for the program's success. Postill has now even appointed himself project director, the position formerly held by Wasson.

As Postill continued the story, he claimed he fired Reno when she supposedly told him she would not show information on the program to the sheriff "or anyone outside the program." That, according to Postill, was refusal to recognize her employer. However, according to the grant application, Reno was under the responsibility of the project director, then Jail Administrator Paul Wasson, rather than directly to the Sheriff. After Reno left Postill's office, he went to Wasson and told him to sign a termination notice for Reno.

The next day, Wasson had not yet told Reno of the Sheriffs order, so Postill took matters into his own hands. He called Reno into his office, ordered her to resign immediately or be fired. Reno told him he did not have the right to fire her (that power was vested in the project director under the grant application). Postill told her to leave.

After Reno left the office, Manildi came in with a resignation which was critical of the Sheriff's handling of the Program, stating Postill had exercised "heavy -handed control." For that, Postill found Manildi guilty of "insubordination," and she, too, was fired. Larry Hunter's critical resignation also resulted in a third firing. Postill said, "It was out and out insubordination to imply I was interfering with their program."

Because the grant application did not place them in direct line of control under the Sheriff, the Rehabilitation staff did not believe they were responsible to him.

Postill claims differently. As he put it, "If I walked up to the Undersheriff on the street, and he said he didn't work for me, he worked for Washtenaw County, I'd fire him."

The fired employees are seeking full reinstatement, stating that as their resignations were never officially accepted, they are now void because of the firings. What the Board of Commissioners will decide is not known at present. (As the SUN went to press, another session of the hearing had been scheduled to hear testimony by the fired employees. Following that, the Board is scheduled to reach a decision on the case, too late for this edition.)

Even if the employees win their case, the Sheriff made it clear he didn't want them back, claiming that all their activities since the firings were "solely to discredit myself and the program."

Postill further claimed that the Board had no power in the personnel matters of his department anyway. When asked why he agreed to the hearing Postill said, "Every County employee has the right to a hearing before the Board, even if it isn't binding."

But Postill doesn't expect to lose, stating absolutely "my case is so overwhelmingly solid." He was "reserving the right" to decide whether he would accept the Board's decision or not.

Postill made it clear in the hearing that he doesn't like being told he's wrong. He wouldn't accept it from the staff of the Inmate Rehabilitation Program, from Jail Administrator Paul Wasson, and he probably won't take it from the Commissioners either.