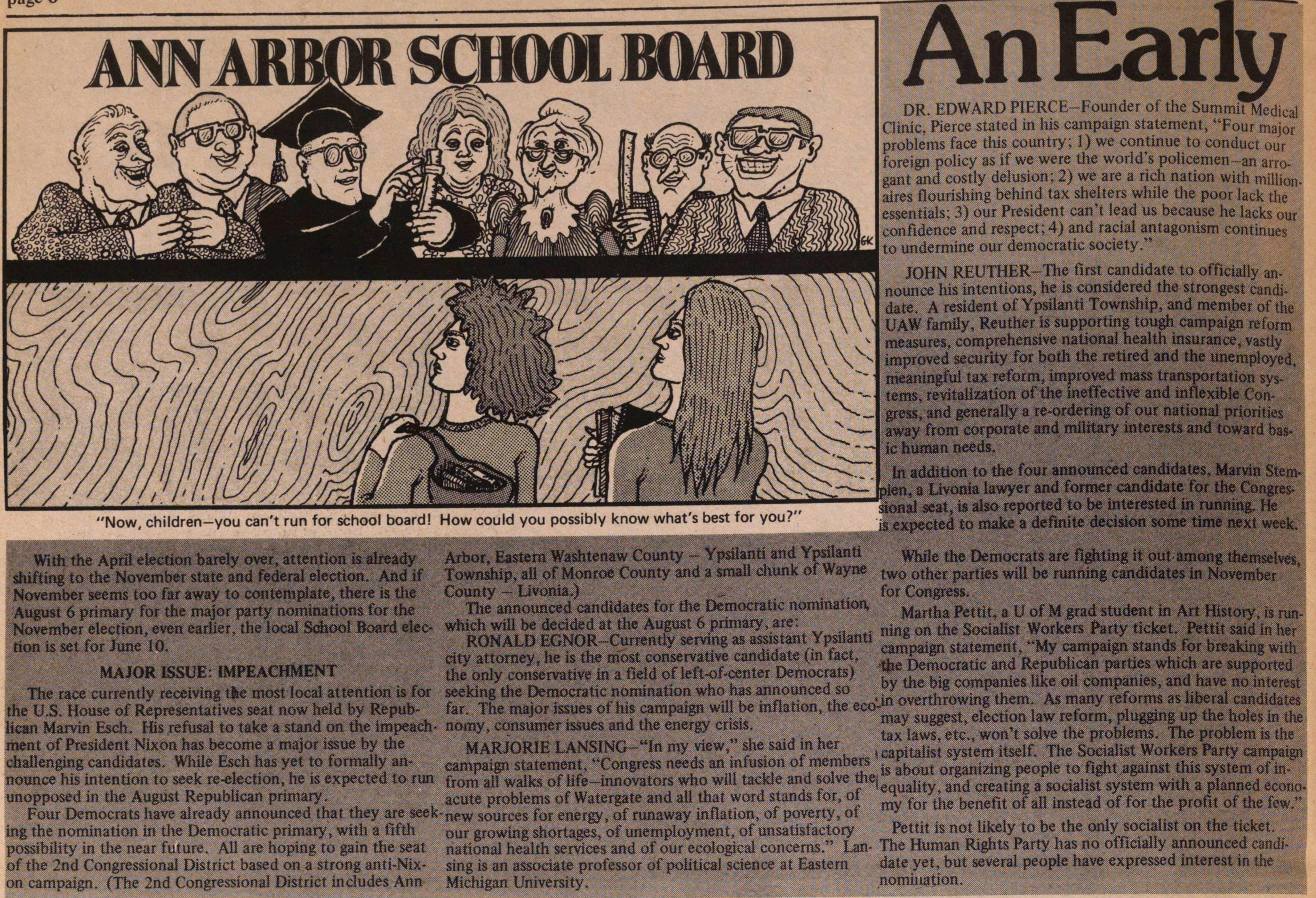 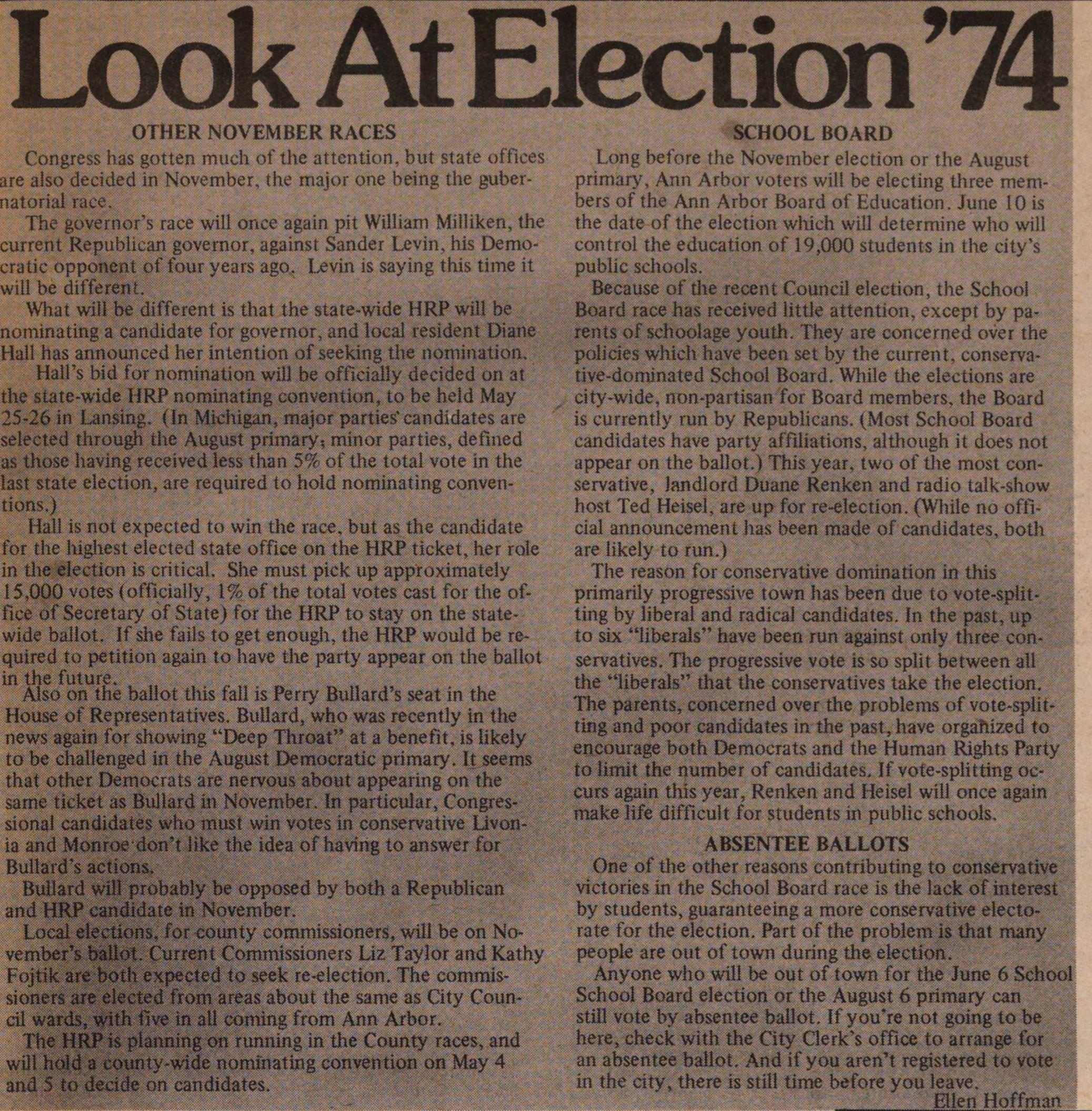 An Early Look At Election '74

With the April election barely over attention is already shifting to the November state and federal election. And if November seems too far away to contemplate, there is the August 6 primary for the major party nominations for the November election, even earlier, the local School Board election is set for June 10.

The race currently receiving the most local attention is for the U.S. House of Representatives seat now held by Republican Marvin Esch. His refusal to take a stand on the impeachment of President Nixon has become a major issue by the challenging candidates. While Esch has yet to formally announce his intention to seek re-election, he is expected to run unopposed in the August Republican primary.

Four Democrats have already announced that they are seeking the nomination in the Democratic primary, with a fifth possibility in the near future. All are hoping to gain the seat of the 2nd Congressional District based on a strong anti-Nixon campaign. (The 2nd Congressional District includes Ann Arbor, Eastern Washtenaw County - Ypsilanti and Ypsilanti Township, all of Monroe County and a small chunk of Wayne County - Livonia.)

The announced candidates for the Democratic nomination, which will be decided at the August 6 primary, are:

RONALD EGNOR-Currently serving as assistant Ypsilanti city attorney, he is the most conservative candidate (in fact, the only conservative in a field of left-of-center Democrats) seeking the Democratic nomination who has announced so far. The major issues of his campaign will be inflation, the eco- nomy, consumer issues and the energy crisis.

MARJORIE LANSING-"In my view," she said in her campaign statement, "Congress needs an infusion of members from all walks of life-innovators who will tackle and solve the acute problems of Watergate and all that word stands for, of new sources for energy, of runaway inflation, of poverty, of our growing shortages, of unemployment, of unsatisfactory national health services and of our ecological concerns." Lansing is an associate professor of political science at Eastern Michigan University.

DR. EDWARD PIERCE-Founder of the Summit Medical Clinic, Pierce stated in his campaign statement, "Four major problems face this country; 1) we continue to conduct our foreign policy as if we were the world's policemen-an arrogant and costly delusion; 2) we are a rich nation with millionaires flourishing behind tax shelters while the poor lack the essentials; 3) our President can't lead us because he lacks our confidence and respect; 4) and racial antagonism continues to undermine our democratic society."

JOHN REUTHER-The first candidate to officially announce his intentions, he is considered the strongest candidate. A resident of Ypsilanti Township, and member of the UAW family, Reuther is supporting tough campaign reform measures, comprehensive national health insurance, vastly improved security for both the retired and the unemployed, meaningful tax reform, improved mass transportation systems, revitalization of the ineffective and inflexible Congress, and generally a re-ordering of our national priorities away from corporate and military interests and toward basic human needs.

In addition to the four announced candidates, Marvin Stempien, a Livonia lawyer and former candidate for the Congressional seat, is also reported to be interested in running. He is expected to make a definite decision some time next week.

While the Democrats are fighting it out among themselves, two other parties will be running candidates in November for Congress.

Martha Pettit, a U of M grad student in Art History, is running on the Socialist Workers Party ticket. Pettit said in her campaign statement, "My campaign stands for breaking with the Democratic and Republican parties which are supported by the big companies like oil companies, and have no interest in overthrowing them. As many reforms as liberal candidates may suggest, election law reform, plugging up the holes in the tax laws, etc, won't solve the problems. The problem is the capitalist system itself. The Socialist Workers Party campaign is about organizing people to fight against this system of inequality, and creating a socialist system with a planned economy for the benefit of all instead of for the profit of the few."

Pettit is not likely to be the only socialist on the ticket. The Human Rights Party has no officially announced candidate yet, but several people have expressed interest in the nomination.

Congress has gotten much of the attention, but state offices are also decided in November, the major one being the gubernatorial race.

The governor's race will once again pit William Milliken, the current Republican governor, against Sander Levin, his Democratic opponent of four years ago. Levin is saying this time it will be different.

What will be different is that the state-wide HRP will be nominating a candidate for governor, and local resident Diane Hall has announced her intention of seeking the nomination.

Hall's bid for nomination will be officially decided on at the state-wide HRP nominating convention, to be held May 25-26 in Lansing. (In Michigan, major parties' candidates are selected through the August primary; minor parties, defined as those having received less than 5% of the total vote in the last state election, are required to hold nominating conventions.)

Hall is not expected to win the race, but as the candidate for the highest elected state office on the HRP ticket, her role in the election is critical. She must pick up approximately 15,000 votes (officially, 1% of the total votes cast for the office of Secretary of State) for the HRP to stay on the statewide ballot. If she fails to get enough, the HRP would be required to petition again to have the party appear on the ballot in the future.

Also on the ballot this fall is Perry Bullard's seat in the House of Representatives. Bullard, who was recently in the news again for showing "Deep Throat" at a benefit, is likely to be challenged in the August Democratic primary. It seems that other Democrats are nervous about appearing on the same ticket as Bullard in November. In particular, Congressional candidates who must win votes in conservative Livonia and Monroe don't like the idea of having to answer for Bullard's actions.

Bullard will probably be opposed by both a Republican and HRP candidate in November.

Local elections, for county commissioners, will be on November's ballot. Current Commissioners Liz Taylor and Kathy Fojtik are both expected to seek re-election. The commissioners are elected from areas about the same as City Council wards, with five in all coming from Ann Arbor.

The HRP is planning on running in the County races, and will hold a county-wide nominating convention on May 4 and 5 to decide on candidates.

Long before the November election or the August primary, Ann Arbor voters will be electing three members of the Ann Arbor Board of Education. June 10 is the date of the election which will determine who will control the education of 19,000 students in the city's public schools.

Because of the recent Council election, the School Board race has received little attention, except by parents of school-age youth. They are concerned over the policies which have been set by the current, conservative-dominated School Board. While the elections are city-wide, non-partisan for Board members, the Board is currently run by Republicans. (Most School Board candidates have party affiliations, although it does not appear on the ballot.) This year, two of the most conservative, landlord Duane Renken and radio talk-show host Ted Heisel, are up for re-election. (While no official announcement has been made of candidates, both are likely to run.)

The reason for conservative domination in this primarily progressive town has been due to vote-splitting by liberal and radical candidates. In the past, up to six "liberals" have been run against only three conservatives. The progressive vote is so split between all the "liberals" that the conservatives take the election. The parents, concerned over the problems of vote-splitting and poor candidates in the past, have organized to encourage both Democrats and the Human Rights Party to limit the number of candidates, If vote-splitting occurs again this year, Renken and Heisel will once again make life difficult for students in public schools.

One of the other reasons contributing to conservative victories in the School Board race is the lack of interest by students, guaranteeing a more conservative electorate for the election. Part of the problem is that many people are out of town during the election.

Anyone who will be out of town for the June 6 School School Board election or the August 6 primary can still vote by absentee ballot. If you're not going to be here, check with the City Clerk's office to arrange for an absentee ballot. And if you aren't registered to vote in the city. there is still time before you leave.