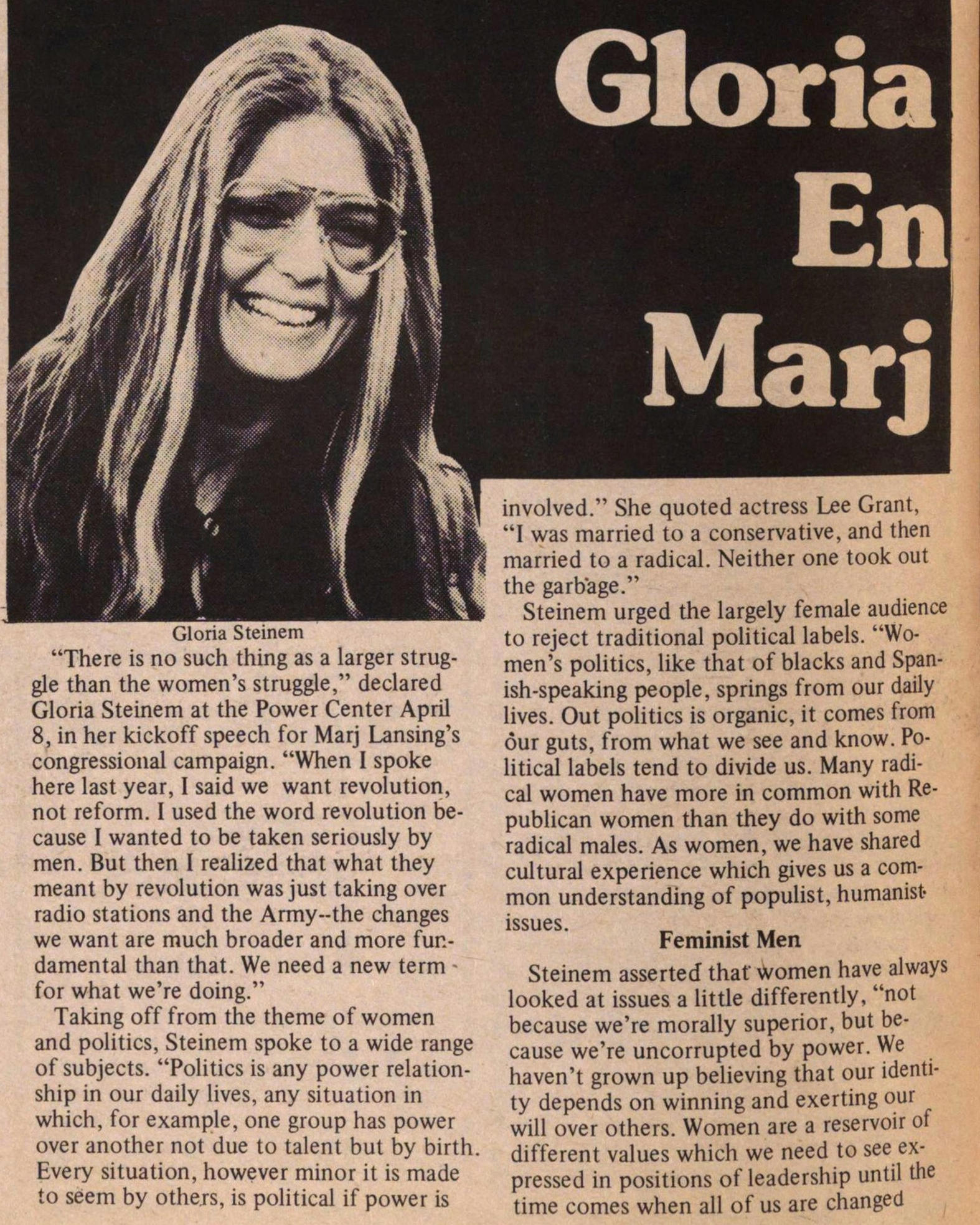 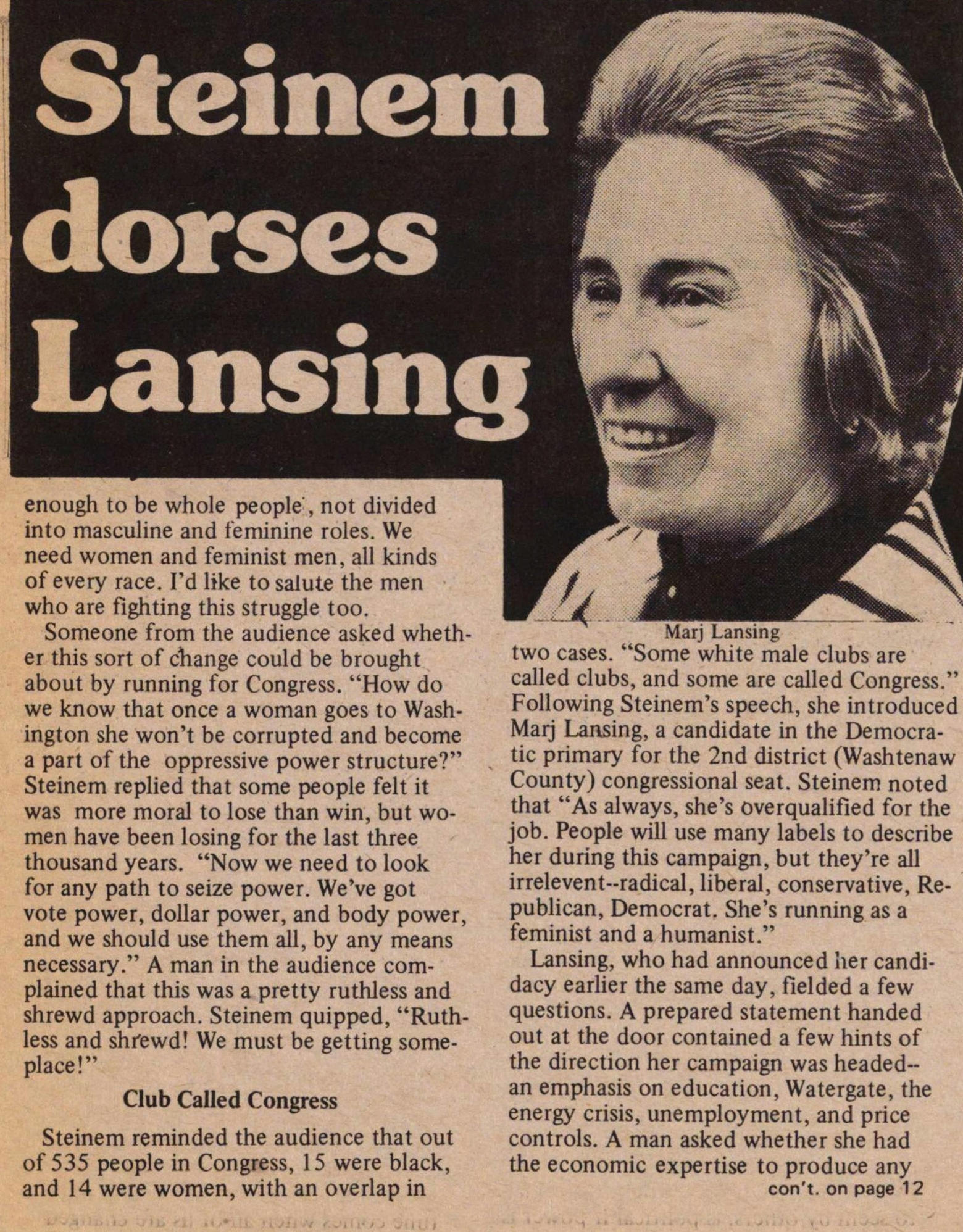 "There is no such thing as a larger struggle than the women's struggle," declared Gloria Steinem at the Power Center April 8, in her kickoff speech for Marj Lansing's congressional campaign. "When I spoke here last year, I said we want revolution, not reform. I used the word revolution because I wanted to be taken seriously by men. But then I realized that what they meant by revolution was just taking over radio stations and the Army-the changes we want are much broader and more fundamental than that. We need a new term for what we're doing."

Taking off from the theme of women and politics, Steinem spoke to a wide range of subjects. "Politics is any power relationship in our daily lives, any situation in which, for example, one group has power over another not due to talent but by birth. Every situation, however minor it is made to seem by others, is political if power is involved." She quoted actress Lee Grant, "I was married to a conservative, and then married to a radical. Neither one took out the garbage."

Steinem urged the largely female audience to reject traditional political labels. "Women's politics, like that of blacks and Spanish-speaking people, springs from our daily lives. Our politics is organic, it comes from our guts, from what we see and know. Political labels tend to divide us. Many radical women have more in common with Republican women than they do with some radical males. As women, we have shared cultural experience which gives us a common understanding of populist, humanist issues.

Steinem asserted that women have always looked at issues a little differently, "not because we're morally superior, but because we're uncorrupted by power. We haven't grown up believing that our identity depends on winning and exerting our will over others. Women are a reservoir of different values which we need to see expressed in positions of leadership until the time comes when all of us are changed enough to be whole people, not divided into masculine and feminine roles. We need women and feminist men, all kinds of every race. I'd like to salute the men who are fighting this struggle too.

Someone from the audience asked whether this sort of change could be brought about by running for Congress. "How do we know that once a woman goes to Washington she won't be corrupted and become a part of the oppressive power structure?" Steinem replied that some people felt it was more moral to lose than win, but women have been losing for the last three thousand years. "Now we need to look for any path to seize power. We've got vote power, dollar power, and body power, and we should use them all, by any means necessary." A man in the audience complained that this was a pretty ruthless and shrewd approach. Steinem quipped, "Ruthless and shrewd! We must be getting someplace!"

Steinem reminded the audience that out of 535 people in Congress, 15 were black, and 14 were women, with an overlap in two cases. "Some white male clubs are called clubs, and some are called Congress." Following Steinem's speech, she introduced Marj Lansing, a candidate in the Democratic primary for the 2nd district (Washtenaw County) congressional seat. Steinem noted that "As always, she's overqualified for the job. People will use many labels to describe her during this campaign, but they're all irrelevant-radical, liberal, conservative, Republican, Democrat. She's running as a feminist and a humanist."

Lansing, who had announced her candidacy earlier the same day, fielded a few questions. A prepared statement handed out at the door contained a few hints of the direction her campaign was headed- an emphasis on education, Watergate, the energy crisis, unemployment, and price controls. A man asked whether she had the economic expertise to produce any