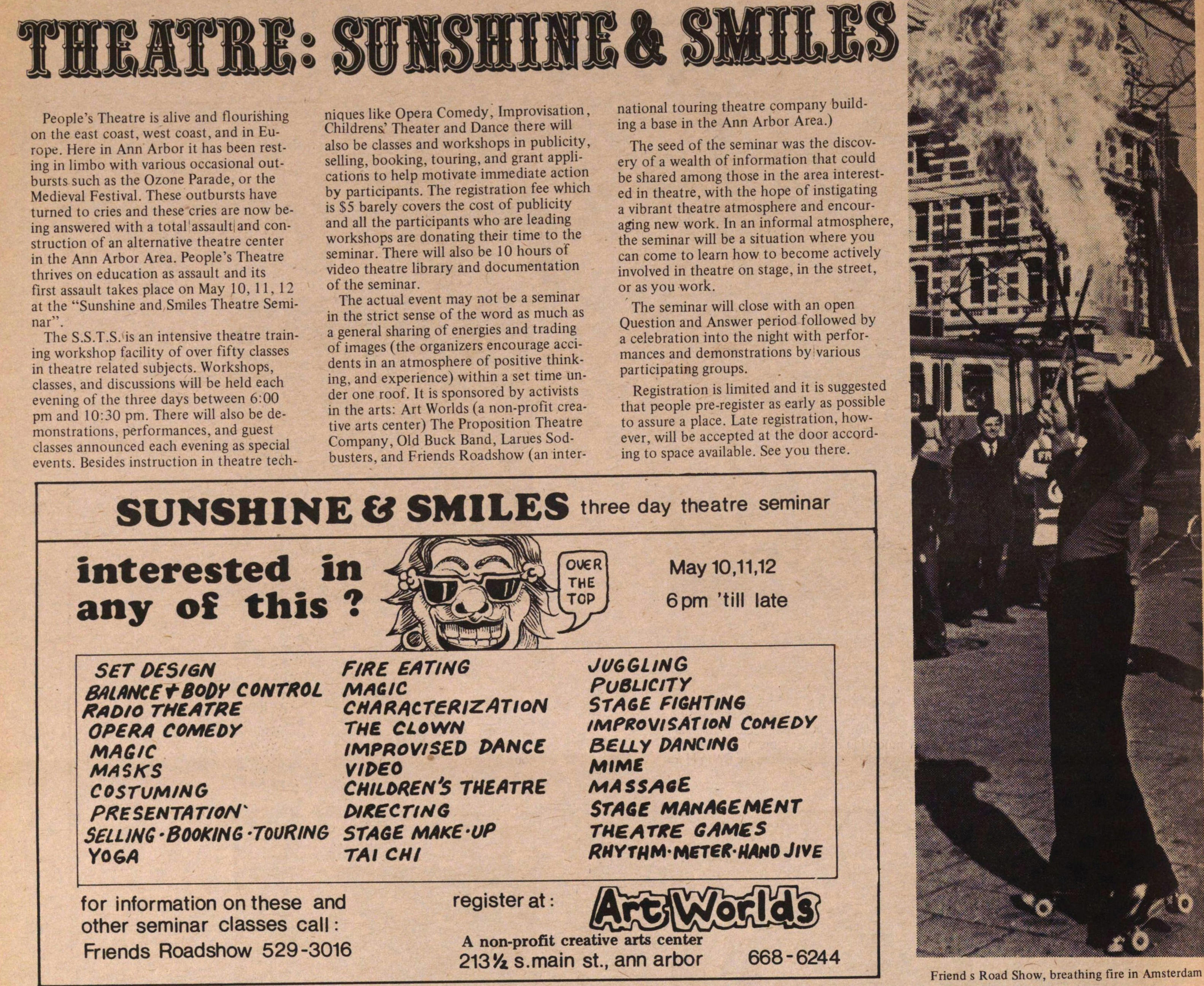 People's Theatre is alive and flourishing on the east coast, west coast, and in Europe. Here in Ann Arbor it has been resting in limbo with various occasional outbursts such as the Ozone Parade, or the Medieval Festival. These outbursts have turned to cries and these cries are now being answered with a total assault and construction of an alternative theatre center in the Ann Arbor Area. People's Theatre thrives on education as assault and its first assault takes place on May 10, 11, 12 at the "Sunshine and Smiles Theatre Seminar".

The S.S.T.S. is an intensive theatre training workshop facility of over fifty classes in theatre related subjects. Workshops, classes, and discussions will be held each evening of the three days between 6:00 pm and 10:30 pm. There will also be demonstrations, performances, and guest classes announced each evening as special events. Besides instruction in theatre techniques like Opera Comedy, Improvisation, Childrens' Theater and Dance there will also be classes and workshops in publicity, selling, booking, touring, and grant applications to help motivate immediate action by participants. The registration fee which is $5 barely covers the cost of publicity and all the participants who are leading workshops are donating their time to the seminar. There will also be 10 hours of video theatre library and documentation of the seminar.

The actual event may not be a seminar in the strict sense of the word as much as a general sharing of energies and trading of images (the organizers encourage accidents in an atmosphere of positive thinking, and experience) within a set time under one roof. It is sponsored by activists in the arts: Art Worlds (a non-profit creative arts center) The Proposition Theatre Company, Old Buck Band, Larues Sodbusters, and Friends Roadshow (an international touring theatre company building a base in the Ann Arbor Area.)

The seed of the seminar was the discovery of a wealth of information that could be shared among those in the area interested in theatre, with the hope of instigating a vibrant theatre atmosphere and encouraging new work. In an informal atmosphere, the seminar will be a situation where you can come to learn how to become actively involved in theatre on stage, in the street, or as you work.

The seminar will close with an open Question and Answer period followed by a celebration into the night with performances and demonstrations by various participating groups.

Registration is limited and it is suggested that people pre-register as early as possible to assure a place. Late registration, however, will be accepted at the door according to space available. See you there.