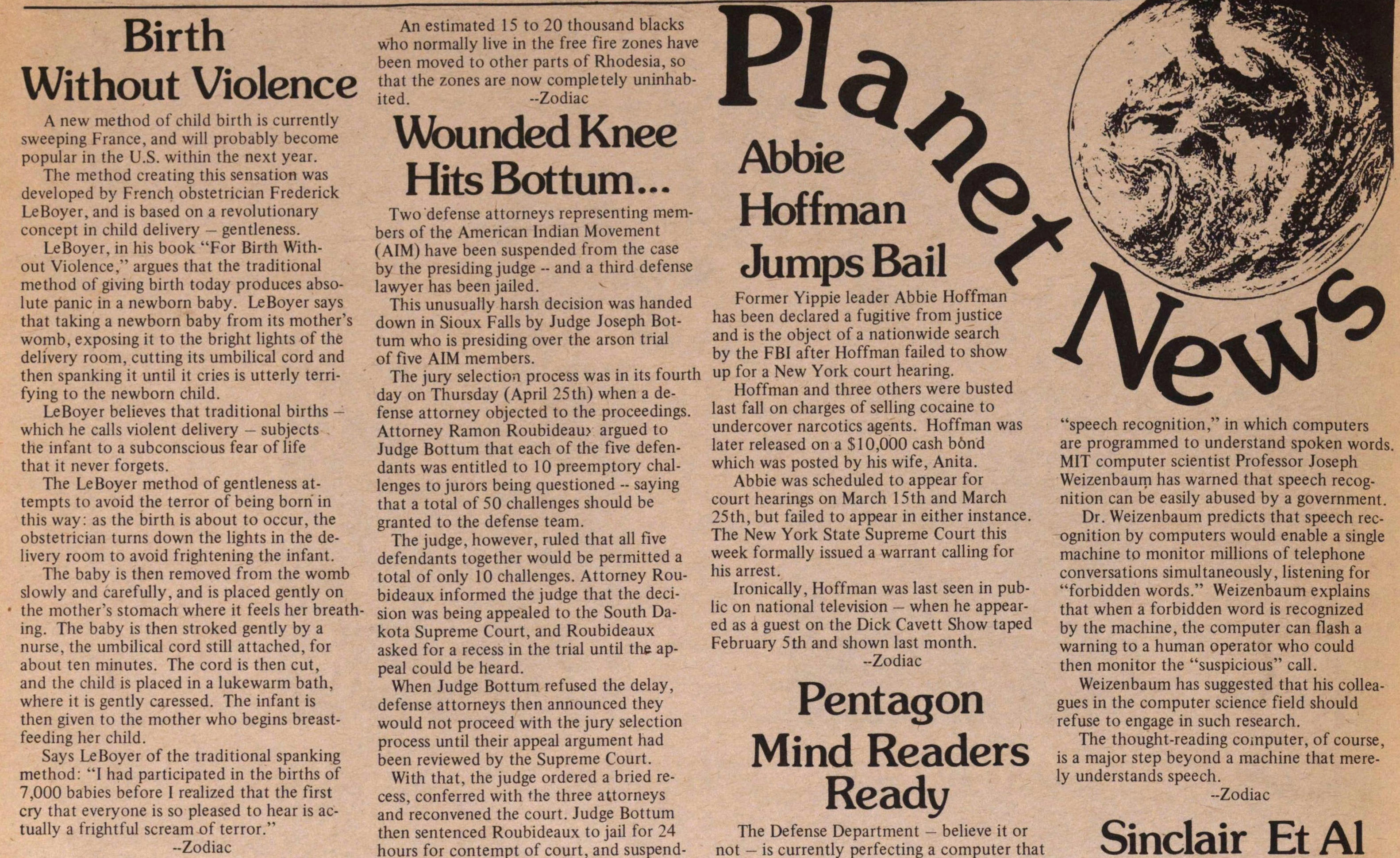 A new method of child birth is currently sweeping France, and will probably become popular in the U.S. within the next year.

The method creating this sensation was developed by French obstetrician Frederick LeBoyer, and is based on a revolutionary concept in child delivery - gentleness.

LeBoyer, in his book "For Birth Without Violence," argues that the traditional method of giving birth today produces absolute panic in a newborn baby. LeBoyer says that taking a newborn baby from its mother's womb, exposing it to the bright lights of the delivery room, cutting its umbilical cord and then spanking it until it cries is utterly terrifying to the newborn child.

LeBoyer believes that traditional births - which he calls violent delivery - subjects the infant to a subconscious fear of life that it never forgets.

The LeBoyer method of gentleness attempts to avoid the terror of being born in this way: as the birth is about to occur, the obstetrician turns down the lights in the delivery room to avoid frightening the infant.

The baby is then removed from the womb slowly and carefully, and is placed gently on the mother's stomach where it feels her breathing. The baby is then stroked gently by a nurse, the umbilical cord still attached, for about ten minutes. The cord is then cut, and the child is placed in a lukewarm bath, where it is gently caressed. The infant is then given to the mother who begins breastfeeding her child.

Says LeBoyer of the traditional spanking method: "I had participated in the births of 7,000 babies before I realized that the first cry that everyone is so pleased to hear is actually a frightful scream of terror." --Zodiac

An estimated 15 to 20 thousand blacks who normally live in the free fire zones have been moved to other parts of Rhodesia, so that the zones are now completely uninhabited.
--Zodiac

Two defense attorneys representing members of the American Indian Movement (AIM) have been suspended from the case by the presiding judge -- and a third defense lawyer has been jailed.

This unusually harsh decision was handed down in Sioux Falls by Judge Joseph Bottum who is presiding over the arson trial of the five AIM members.

The jury selection process was in its fourth day on Thursday (April 25th) when a defense attorney objected to the proceedings. Attorney Ramon Roubideaux argued to Judge Bottum that each of the five defendants was entitled to 10 preemptory challenges to jurors being questioned -- saying that a total of 50 challenges should be granted to the defense team.

The judge, however, ruled that all five defendants together would be permitted a total of only 10 challenges. Attorney Roubideaux informed the judge that the decision was being appealed to the South Dakota Supreme Court, and Robideaux asked for a recess in the trial until the appeal could be heard.

When judge Bottum refused the delay, defense attorneys then announced they would not proceed with the jury selection process until their appeal argument had been reviewed by the Supreme Court.

With that, the judge ordered a bried recess, conferred with the three attorneys and reconvened the court. Judge Bottum then sentenced Roubideaux to jail for 24 hours for contempt of court, and suspend-

Former Yippie leader Abbie Hoffman has been declared a fugitive from justice and is the object of a nationwide search by the FBI after Hoffman failed to show up for a New York court hearing.

The Defense Department -- believe is or not --  is currently perfecting a computer that "speech recognition," in which computers are programmed to understand spoken words. MIT computer scientist Professor Joseph Weizenbaum has warned that speech recognition can be easily abused by a government.

Dr. Weizenbaum predicts that speech recognition by computers would enable a single machine to monitor millions of telephone conversations simultaneously, listening for "forbidden words." Weizen baum explains that when a forbidden word is recognized by the machine, the computer can flash a warning to a human operator who could then monitor the "suspicious" call.

Weizenbaum has suggested that his colleagues in the computer science field should refuse to engage in such research.

The thought-reading computer, of course, is a major step beyond a machine that merely understands speech.
--Zodiac