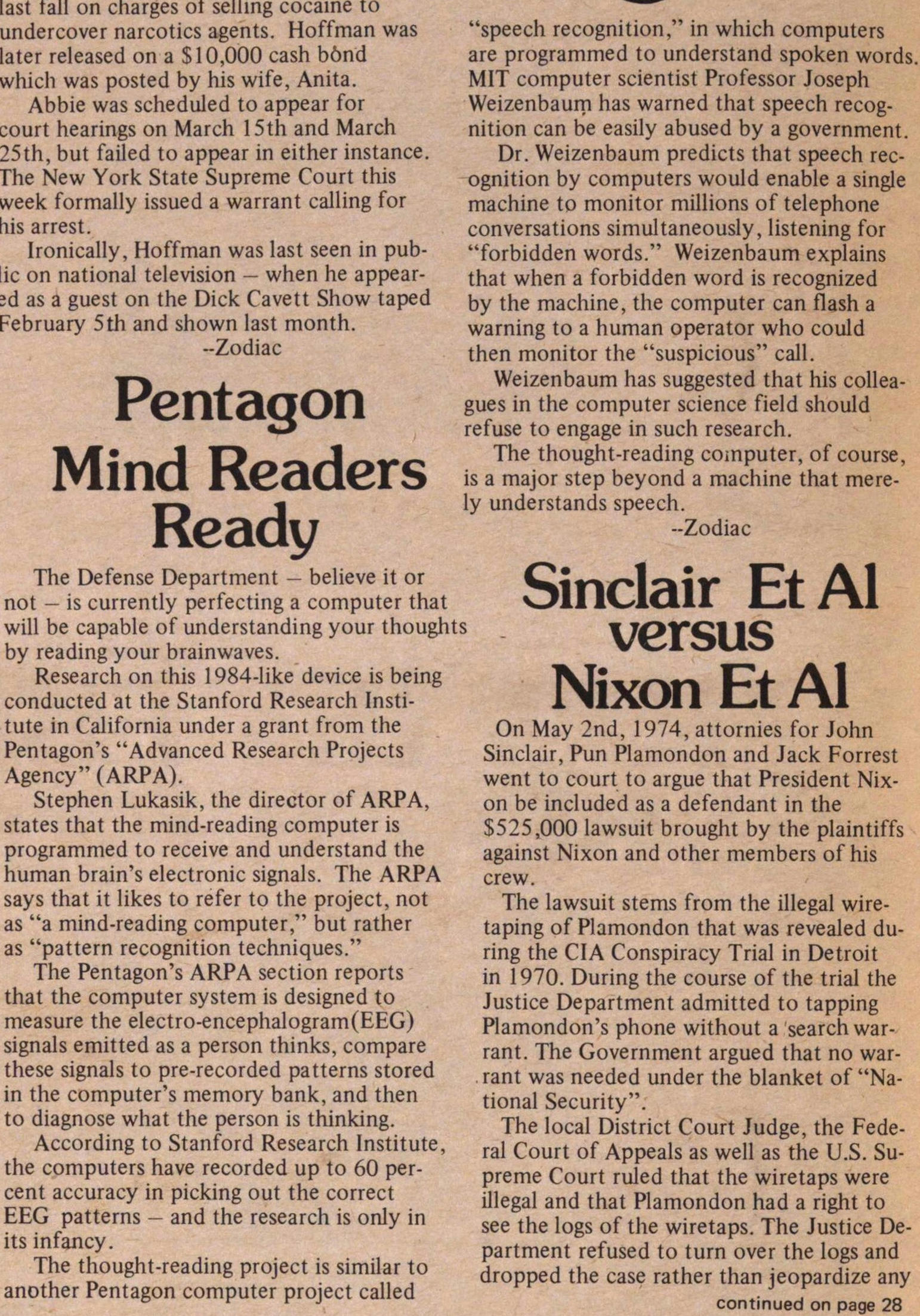 The Defense Department -- believe it or not -- is currently perfecting a computer that will be capable of understanding your thoughts by reading your brainwaves.

Research on this 1984-like device is being conducted at the Stanford Research Institute in California under a grant from the Pentagon's "Advanced Research Projects Agency" (ARPA).

Stephen Lukasik, the director of ARPA, states that the mind-reading computer is programmed to receive and understand the human brain's electronic signals. The ARPA says that it likes to refer to the project, not as "a mind-reading computer," but rather as "pattern recognition techniques."

The Pentagon's ARPA section reports that the computer system is designed to measure the electro-encephalogram(EEG) signals emitted as a person thinks, compare these signals to pre-recorded patterns stored in the computer's memory bank, and then to diagnose what the person is thinking.

According to Stanford Research Institute, the computers have recorded up to 60 percent accuracy in picking out the correct EEG patterns -- and the research is only in its infancy.

The thought-reading project is similar to another Pentagon computer project called "speech recognition," in which computers are programmed to understand spoken words. MIT computer scientist Professor Joseph Weizenbaum has warned that speech recognition can be easily abused by a government.

Dr. Weizenbaum predicts that speech recognition by computers would enable a single machine to monitor millions of telephone conversations simultaneously, listening for "forbidden words." Weizenbaum explains that when a forbidden word is recognized by the machine, the computer can flash a warning to a human operator who could then monitor the "suspicious" call.

Weizenbaum has suggested that his colleagues in the computer science field should refuse to engage in such research.

The thought-reading computer, of course, is a major step beyond a machine that merely understands speech.
--Zodiac

On May 2nd, 1974, attornies for John Sinclair, Pun Plamondon and Jack Forrest went to court to argue that President Nixon be included as a defendant in the $525,000 lawsuit brought by the plaintiffs against Nixon and other members of his crew.

The lawsuit stems from the illegal wiretapping of Plamondon that was revealed during the CIA Conspiracy Trial in Detroit in 1970. During the course of the trial the Justice Department admitted to tapping Plamondon's phone without a search warrant. The Government argued that no warrant was needed under he blanket of "National Security".

The local District Court Judge, the Federal Court of Appeals as well as the U.S. Supreme Court ruled that the wiretaps were illegal and that Plamondon had a right to see the logs of the wiretaps. The Justice Department refused to turn over the logs and dropped the case rather than jeopardize any