How The Fbi Attacked The Black Panther Party 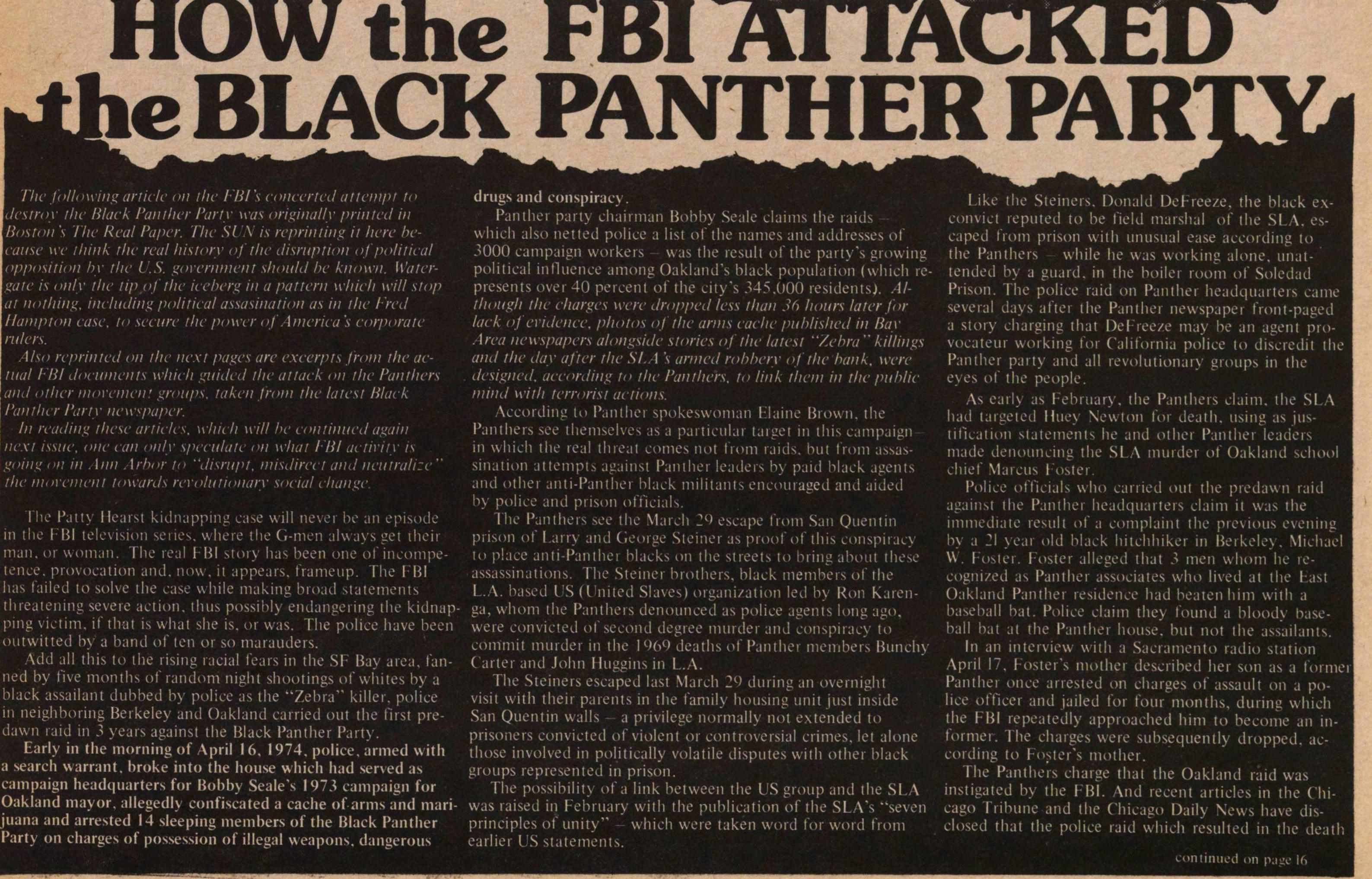 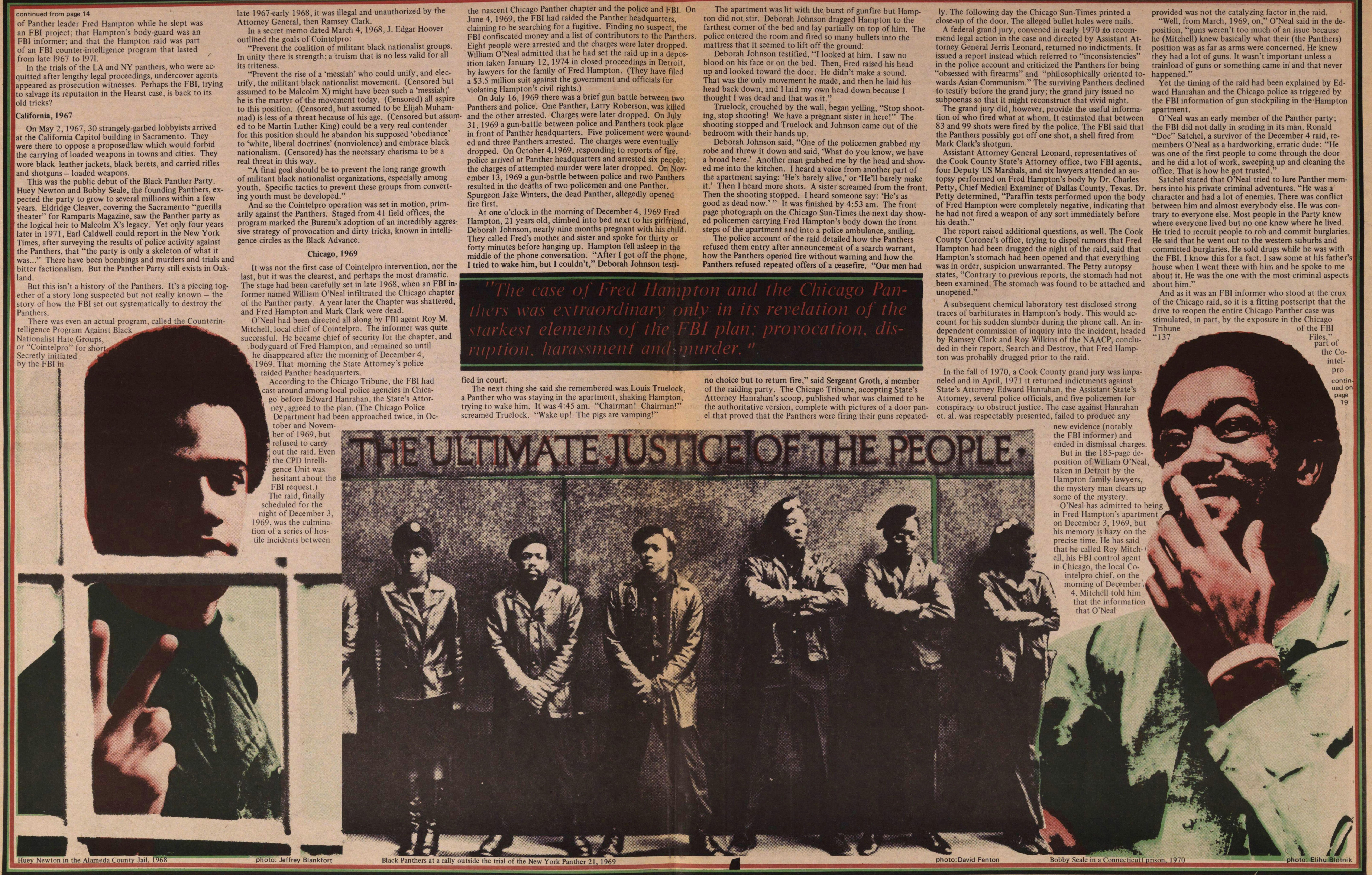 HOW the FBI ATTACKED the BLACK PANTHER PARTY

The following article on the FBI's concerted attempt to destroy the Black Panther Party was originally printed in Boston's The Red Paper. The SUN is reprinting it because we think the real history of the h\disruption of political opposition by the U.S. government should be known. Watergate is only the tip of the iceberg in a pattern which will stop at nothing, including political assassination as in the Fred Hampton case, to secure the power of America's corporate rulers.

Also reprinted on the next pages are excerpts from the actual FBI documents which guided the attack on the Panthers and other movement groups, taken from the latest Black anther Party newspaper.

In reading these articles, which will be continued again next issue, one can only speculate on what FBI activity is going on in Ann Arbor to "disrupt, misdirect and neutralize" the movement towards revolutionary social change.

The Patty Hearts kidnapping will never be an episode in the FBI television series, where the G-men always get their man, or woman. The real FBI story has been one of incompetence, provocation, and, now, it appears, frameup. The FBI has failed to solve the case while making broad statements threatening severe action, thus possibly endangering the kidnapping victim, if that is what she is, or was. The police have been outwitted by a band of ten or so marauders.

Add all of this to the rising racial fears in the SF area, fanned by five months of random night shootings o whites by a black assailant dubbed by police as the "Zebra" killer, police in neighboring Berkeley and Oakland carried out the first pre-dawn raid in 3 years against the Black Panther Party.

Early in the morning of April 16, 1974, police, armed with a search warrant, broke into the house which had served as campaign headquarters for Bobby Seale's 1973 campaign for Oakland mayor, allegedly confiscated a cache of arms and marijuana and arrested 14 sleeping members of the Black Panther Party on charges of possession of illegal weapons, dangerous drugs, and conspiracy.

Panther party chairman Bobby Seale claims the raids -- which also netted police  a list of the names and addresses of 3000 campaign workers -- was the result of the party's growing political influence among Oakland's black population (which represents over 40 percent of the city's 345,000 residents). Although the charges were dropped less than 36 hours later for lack of evidence, photos of the arms cache published in Bay Area newspapers alongside stories of the latest "Zebra" killings and the day after the SLA's armed robbery of the bank, were designed, according to the Panthers, to link them in the public mind with terrorist actions.

According to Panther spokeswoman Elaine Brown, the Panthers see themselves as a particular target at this campaign in which the real threat comes not from raids, but from assassination attempts against Panther leader by paid black agents and other anti-Panther black militants encouraged and aided by police and prison officials.

The Panthers see the March 29 escape from San Quentin prison of Larry and George Steiner as proof of this conspiracy to place anti-Panther blacks on the streets to bring about these assassinations. The Steiner brothers, black members of the L.A. based US (United Slaves) organization led by Ron Karenga, whom the Panthers denounced as police agents long ago, were convicted of second degree murder in the 1969 deaths of Panther members Bunchy Carter and John Huggins in L.A.

The Steiners escaped last March 29 during an oversight visit with their parents in the family housing unit just inside San Quentin walls - a privilege normally not extended to prisoners convicted of violent or controversial crimes, let alone those involved in politically volatile disputes with other black groups represented in prison.

The possibility of a link between the US group and the SLA was raised in February with the publication of the SLA's "seven principles of unity" - which were taken word for word from earlier US statements.

Like the Steiners, Donald DeFreeze, the black ex-convict reputed to be field marshal of the SLA, escaped from prison with unusual ease according to the Panthers - while he was working alone, unattended by a guard, in the boiler room of Soledad Prison.  The police raid on Panther headquarters came several days after the panther newspaper fron-pages a story charging that DeFreeze may be an agent provocateur working for California police to discredit the Panther party and all revolutionary groups in the eyes of the people.

As early as February, the Panthers claim, the SLA had targeted Huey Newton for death, using as justification statements he and other Panther leaders made denouncing the SLA murder of Oakland school chief Marcus Foster.

Police officials who carried out the predawn raid against the Panther headquarters claim it was the immediate result of a complaint the previous evening by a 21 year old black hitchhiker in Berkeley, Michael W. Foster . FOster alleged that 3 men whom he recognized as Panther associates who live at the East Oakland Panther residence had beaten him with a baseball bat. Police claim they found a bloody baseball bar at the Panther house, but not the assailants.

In an interview with a Sacramento radio station April 17, Foster's mother described her son as a former Panther once arrested on charges of assault on a police officer and jailed for four months, during which the FBI repeatedly approached him to become an informer. The charges were subsequently dropped, according to Foster's mother.

The Panthers charge that the Oakland raid was instigated by the FBI. And recent articles in the Chicago Tribune and the Chicago Daily News have disclosed that the police raid which resulted in the death