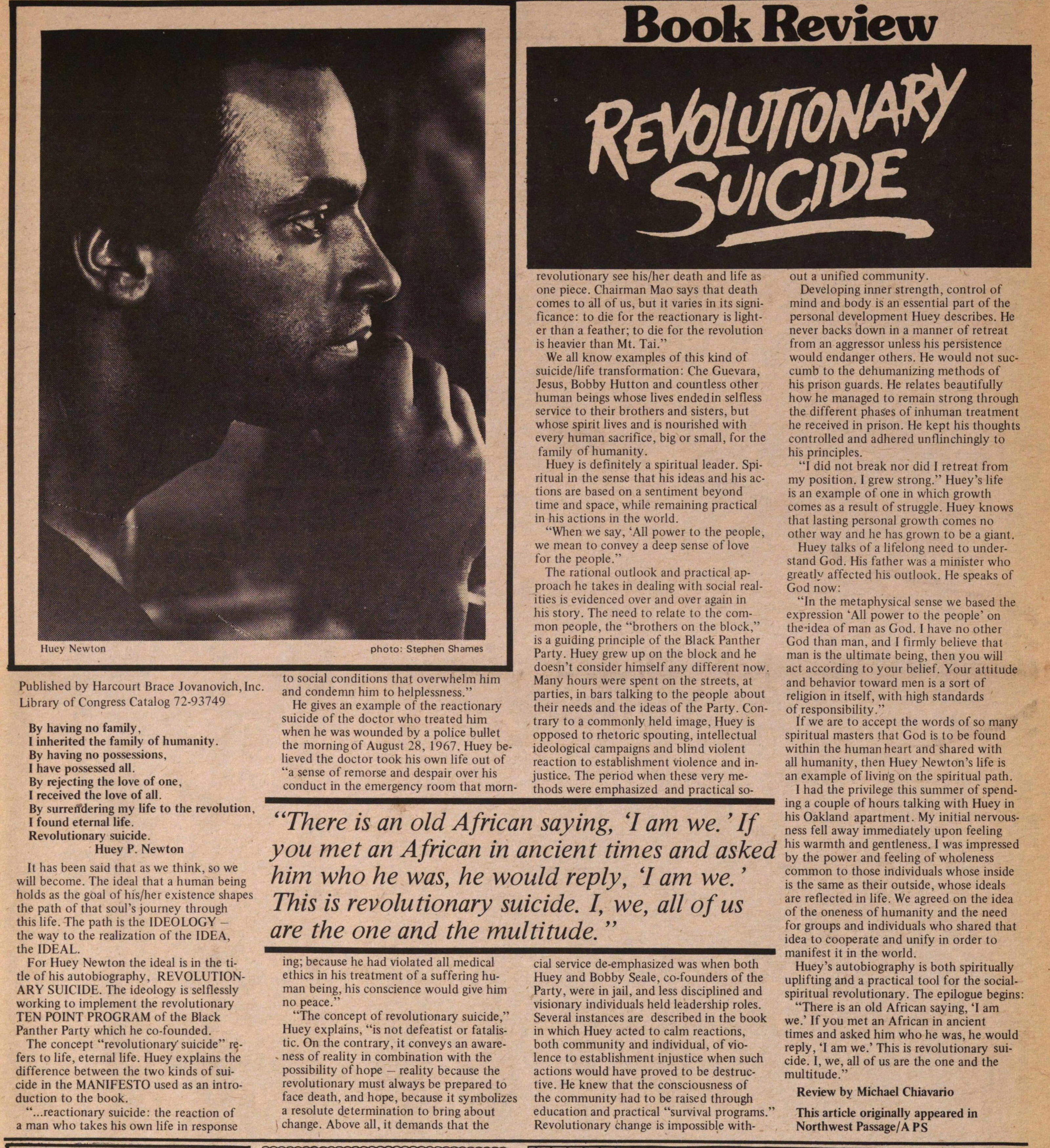 By having no family,
I inherited the family of humanity.
By having no possessions,
I have possessed all.
By rejecting the love of one,
I received the love of all.
By surrendering my life to the revolution,
I found eternal life.
Revolutionary suicide.
Huey P. Newton

It has been said that as we think, so we will become. The ideal that a human being holds as the goal of his/her existence shapes the path of that soul's journey through this life. The path is the IDEOLOGY - the way to the realization of the IDEA, the IDEAL.

For Huey Newton the ideal is in the title of his autobiography, REVOLUTIONARY SUICIDE. The ideology is selflessly working to implement the revolutionary TEN POINT PROGRAM of the Black Panther Party which he co-founded.

The concept "revolutionary suicide" refers to life, eternal life. Huey explains the difference between the two kinds of suicide in the MANIFESTO used as an introduction to the book.

"...reactionary suicide: the reaction of a man who takes his own life in response to social conditions that overwhelm him and condemn him to helplessness."

He gives an example of the reactionary suicide of the doctor who treated him when he was wounded by a police bullet the morning of August 28, 1967. Huey believed the doctor took his own life out of "a sense of remorse and despair over his conduct in the emergency room that morning; because he had violated all medical ethics in his treatment of a suffering human being, his conscience would give him no peace."

"The concept of revolutionary suicide," Huey explains, "is not defeatist or fatalistic. On the contrary, it conveys an awareness of reality in combination with the possibility of hope - reality because the revolutionary must always be prepared to face death, and hope, because it symbolizes a resolute determination to bring about change. Above all, it demands that the revolutionary see his/her death and life as one piece. Chairman Mao says that death comes to all of us, but it varies in its significance: to die for the reactionary is lighter than a feather; to die for the revolution is heavier than Mt. Tai."

We all know examples of this kind of suicide/life transformation: Che Guevara, Jesus, Bobby Hutton and countless other human beings whose lives ended in selfless service to their brothers and sisters, but whose spirit lives and is nourished with every human sacrifice, big or small, for the family of humanity.

Huey is definitely a spiritual leader. Spiritual in the sense that his ideas and his actions are based on a sentiment beyond time and space, while remaining practical in his actions in the world.

"When we say, 'All power to the people, we mean to convey a deep sense of love for the people."

The rational outlook and practical approach he takes in dealing with social realities is evidenced over and over again in his story. The need to relate to the common people, the "brothers on the block," is a guiding principle of the Black Panther Party. Huey grew up on the block and he doesn't consider himself any different now. Many hours were spent on the streets, at parties, in bars talking to the people about their needs and the ideas of the Party. Contrary to a commonly held image, Huey is opposed to rhetoric spouting, intellectual ideological campaigns and blind violent reaction to establishment violence and injustice. The period when these very methods were emphasized and practical social service de-emphasized was when both Huey and Bobby Seale, co-founders of the Party, were in jail, and less disciplined and visionary individuals held leadership roles. Several instances are described in the book in which Huey acted to calm reactions, both community and individual, of violence to establishment injustice when such actions would have proved to be destructive. He knew that the consciousness of the community had to be raised through education and practical "survival programs." Revolutionary change is impossible out a unified community.

Developing inner strength, control of mind and body is an essential part of the personal development Huey describes. He never backs down in a manner of retreat from an aggressor unless his persistence would endanger others. He would not succumb to the dehumanizing methods of his prison guards. He relates beautifully how he managed to remain strong through the different phases of inhuman treatment he received in prison. He kept his thoughts controlled and adhered unflinchingly to his principles.

"I did not break nor did I retreat from my position. I grew strong." Huey's life is an example of one in which growth comes as a result of struggle. Huey knows that lasting personal growth comes no other way and he has grown to be a giant.

Huey talks of a lifelong need to understand God. His father was a minister who greatly affected his outlook. He speaks of God now:

"In the metaphysical sense we based the expression 'All power to the people' on the-idea of man as God. I have no other God than man, and I firmly believe that man is the ultimate being, then you will act according to your belief. Your attitude and behavior toward men is a sort of religion in itself, with high standards of responsibility."

If we are to accept the words of so many spiritual masters that God is to be found within the human heart and shared with all humanity, then Huey Newton's life is an example of living on the spiritual path.

I had the privilege this summer of spending a couple of hours talking with Huey in his Oakland apartment. My initial nervousness fell away immediately upon feeling his warmth and gentleness. I was impressed by the power and feeling of wholeness common to those individuals whose inside is the same as their outside, whose ideals are reflected in life. We agreed on the idea of the oneness of humanity and the need for groups and individuals who shared that idea to cooperate and unify in order to manifest it in the world.

Huey's autobiography is both spiritually uplifting and a practical tool for the social-spiritual revolutionary. The epilogue begins:

"There is an old African saying, 'I am we.' If you met an African in ancient times and asked him who he was, he would reply, 'I am we.' This is revolutionary suicide. I, we, all of us are the one and the multitude."

This article originally appeared in Northwest Passage A PS

"There is an old African saying, 'I am we. ' I f you met an African in ancient times and asked him who he was, he would reply, 'I am we.' This is revolutionary suicide. I, we, all of us are the one and the multitude."