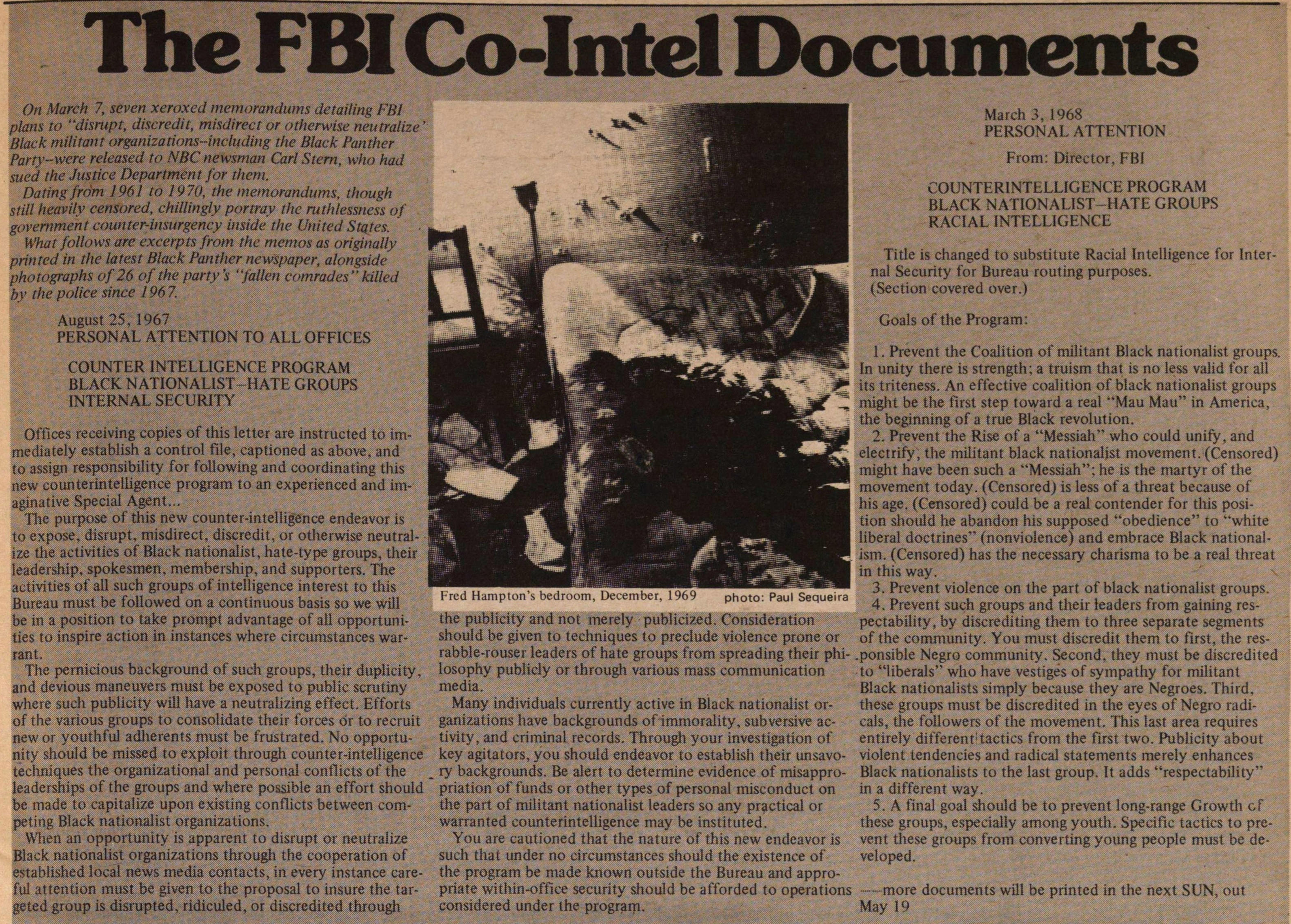 Dating from 1961 to 1970, the memorandums, though still heavily censored, chillingly portray the ruthlessness of government counter-insurgency inside the United States.

What follows are excerpts from the memos as originally printed in the latest Black Panther newspaper, alongside photographs of 26 of the party's "fallen comrades" killed by the police since 1967.

Offices receiving copies of this letter are instructed to immediately establish a control file, captioned as above, and to assign responsibility for following and coordinating this new counterintelligence program to an experienced and imaginative Special Agent...

The purpose of this new counter-intelligence endeavor is to expose, disrupt, misdirect, discredit, or otherwise neutralize the activities of Black nationalist, hate-type groups, their leadership, spokesmen, membership, and supporters. The activities of all such groups of intelligence interest to this Bureau must be followed on a continuous basis so we will be in a position to take prompt advantage of all opportunities to inspire action in instances where circumstances warrant.

The pernicious background of such groups, their duplicity, and devious maneuvers must be exposed to public scrutiny where such publicity will have a neutralizing effect. Efforts of the various groups to consolidate their forces or to recruit new or youthful adherents must be frustrated. No opportunity should be missed to exploit through counter-intelligence techniques the organizational and personal conflicts of the leaderships of the groups and where possible an effort should be made to capitalize upon existing conflicts between competing Black nationalist organizations.

When an opportunity is apparent to disrupt or neutralize Black nationalist organizations through the cooperation of established local news media contacts, in every instance careful attention must be given to the proposal to insure the targeted group is disrupted, ridiculed, or discredited through the publicity and not merely publicized. Consideration should be given to techniques to preclude violence prone or rabble-rouser leaders of hate groups from spreading their philosophy publicly or through various mass communication media.

Many individuals currently active in Black nationalist organizations have backgrounds of immorality, subversive activity, and criminal records. Through your investigation of key agitators, you should endeavor to establish their unsavory backgrounds. Be alert to determine evidence of misappropriation of funds or other types of personal misconduct on the part of militant nationalist leaders so any practical or warranted counterintelligence may be instituted.

You are cautioned that the nature of this new endeavor is such that under no circumstances should the existence of the program be made known outside the Bureau and appropriate within-office security should be afforded to operations considered under the program.

Goals of the Program:

2. Prevent the Rise of a "Messiah" who could unify, and electrify, the militant black nationalist movement. (Censored) might have been such a "Messiah"; he is the martyr of the movement today. (Censored) is less of a threat because of his age. (Censored) could be a real contender for this position should he abandon his supposed "obedience" to "white liberal doctrines" (nonviolence) and embrace Black nationalism. (Censored) has the necessary charisma to be a real threat in this way.

3. Prevent violence on the part of black nationalist groups.

4. Prevent such groups and their leaders from gaining respectability, by discrediting them to three separate segments of the community. You must discredit them to first, the responsible Negro community. Second, they must be discredited to "liberals" who have vestiges of sympathy for militant Black nationalists simply because they are Negroes. Third, these groups must be discredited in the eyes of Negro radicals, the followers of the movement. This last area requires entirely different tactics from the first two. Publicity about violent tendencies and radical statements merely enhances Black nationalists to the last group. It adds "respectability" in a different way.

5. A final goal should be to prevent long-range Growth of these groups, especially among youth. Specific tactics to prevent these groups from converting young people must be developed.

--more documents will be printed in the next SUN, out May 19