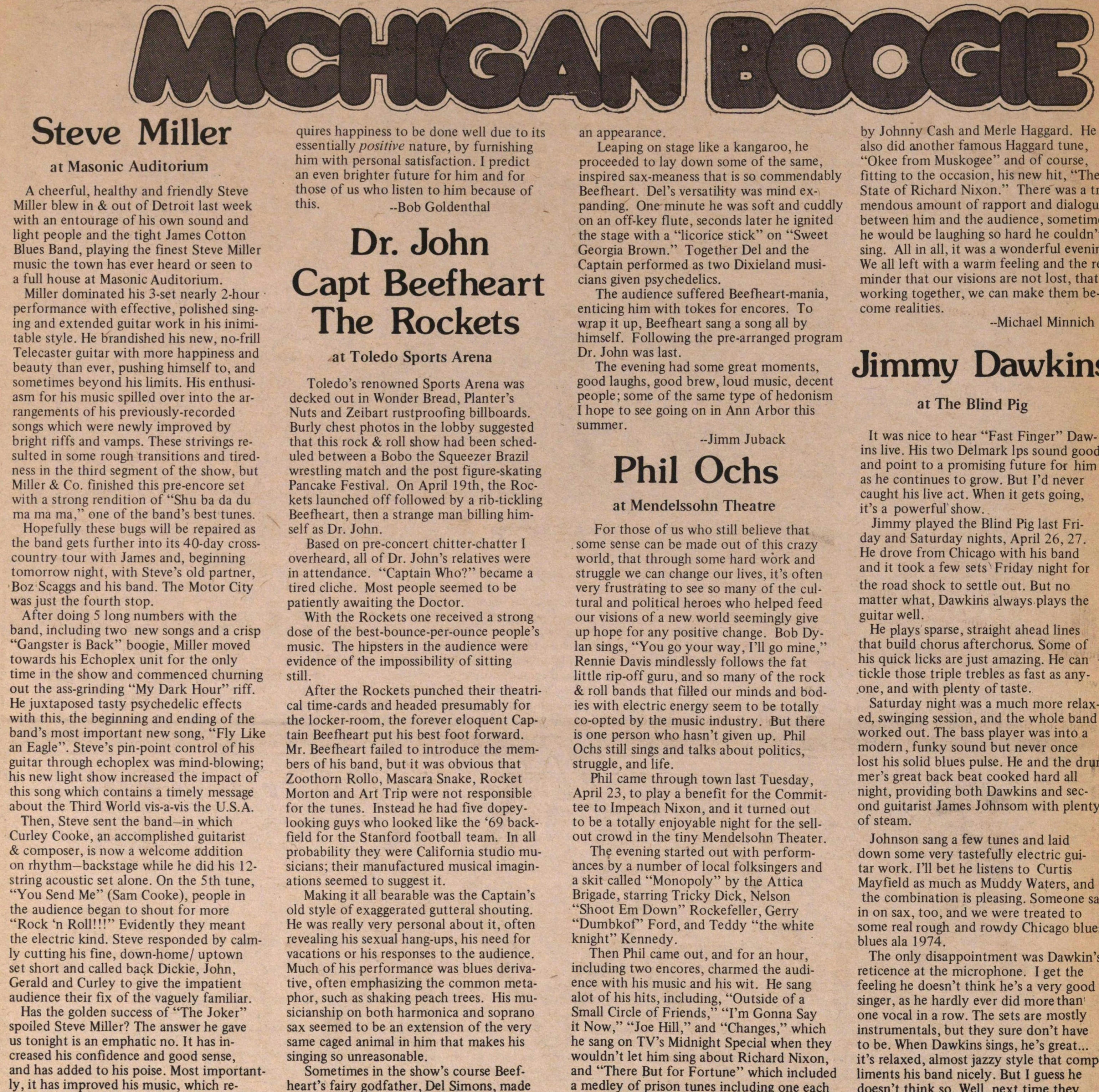 MICHIGAN BOOGIE
Steve Miller
at Masonic Auditorium
A cheerful, healthy and friendly Steve Miller blew in & out of Detroit last week with an entourage of his own sound and light people and the tight James Cotton Blues Band, playing the finest Steve Miller music the town has ever heard or seen to a full house at Masonic Auditorium.
Miller dominated his 3-set nearly 2-hour performance with effective, polished singing and extended guitar work in his inimitable style. He brandished his new, no-frill Telecaster guitar with more happiness and beauty than ever, pushing himself to, and sometimes beyond his limits. His enthusiasm for his music spilled over into the arrangements of his previously-recorded songs which were newly improved by bright riffs and vamps. These strivings resulted in some rough transitions and tiredness in the third segment of the show, but Miller & Co. finished this pre-encore set with a strong rendition of "Shu ba da du ma ma ma," one of the band's best tunes.
Hopefully these bugs will be repaired as the band gets further into its 40-day cross-country tour with James and, beginning tomorrow night, with Steve's old partner, Boz Scaggs and his band. The Motor City was just the fourth stop.
After doing 5 long numbers with the band, including two new songs and a crisp "Gangster is Back" boogie, Miller moved towards his Echoplex unit for the only time in the show and commenced churning out the ass-grinding "My Dark Hour" riff. He juxtaposed tasty psychedelic effects with this, the beginning and ending of the band's most important new song, "Fly Like an Eagle". Steve's pin-point control of his guitar through echoplex was mind-blowing; his new light show increased the impact of this song which contains a timely message about the Third World vis-a-vis the U.S.A.
Then, Steve sent the band-in which Curley Cooke, an accomplished guitarist & composer, is now a welcome addition on rhythm- backstage while he did his 12string acoustic set alone. On the 5th tune, "You Send Me" (Sam Cooke), people in the audience began to shout for more "Rock 'n Roll!!!" Evidently they meant the electric kind. Steve responded by calmly cutting his fine, down-home uptown set short and called back Dickie, John, Gerald and Curley to give the impatient audience their fix of the vaguely familiar.
Has the golden success of "The Joker" spoiled Steve Miller? The answer he gave us tonight is an emphatic no. It has increased his confidence and good sense, and has added to his poise. Most importantly, it has improved his music, which requires happiness to be done well due to its essentially positive nature, by furnishing him with personal satisfaction. I predict an even brighter future for him and for those of us who listen to him because of this.