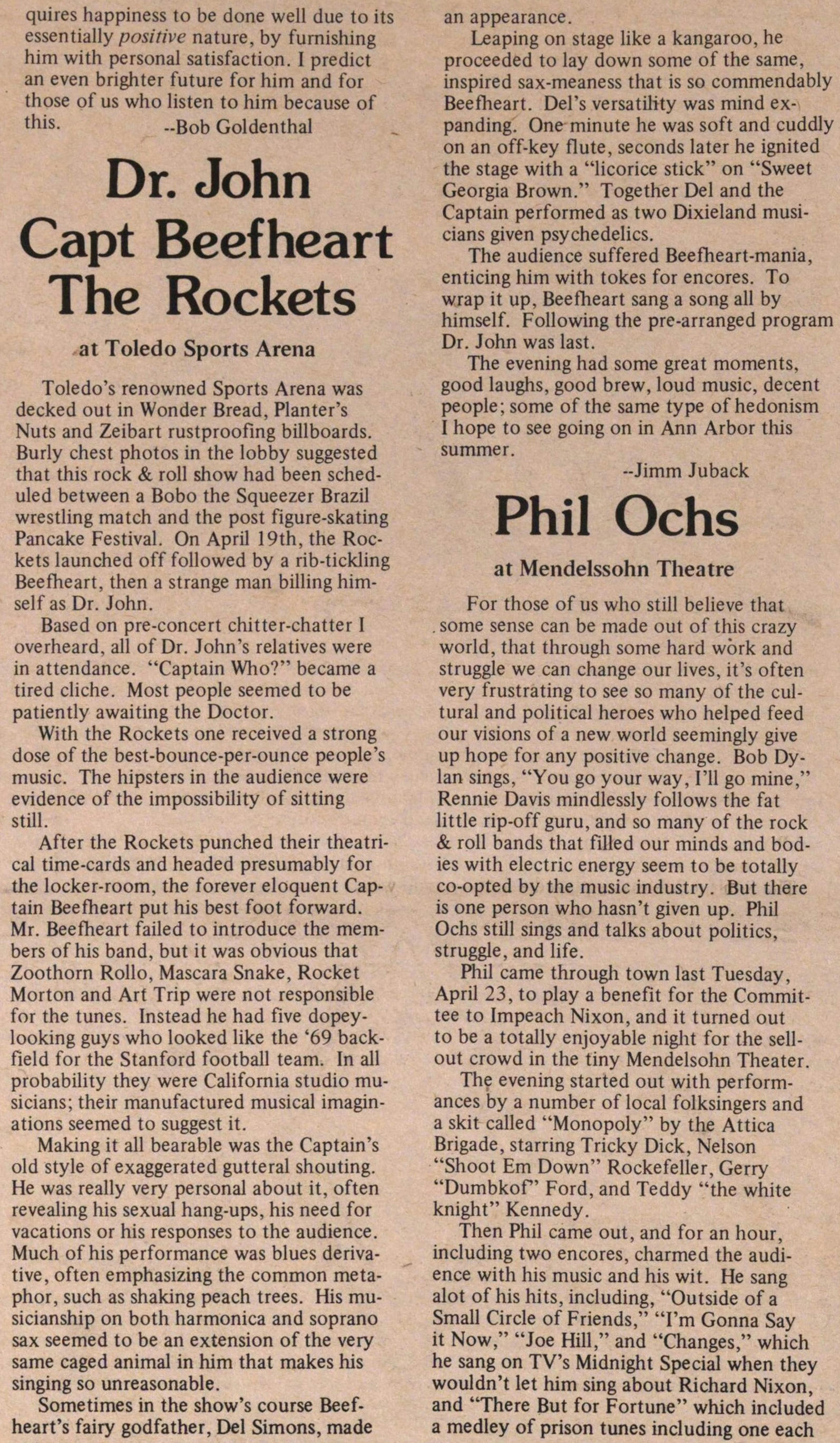 Toledo's renowned Sports Arena was decked out in Wonder Bread, Planter's Nuts and Zeibart rustproofing billboards. Burly chest photos in the lobby suggested that this rock & roll show had been scheduled between a Bobo the Squeezer Brazil wrestling match and the post figure-skating Pancake Festival. On April 19th, the Rockets launched off followed by a rib-tickling Beefheart, then a strange man billing himself as Dr. John.
Based on pre-concert chitter-chatter I overheard, all of Dr. John's relatives were in attendance. "Captain Who?" became a tired cliché. Most people seemed to be patiently awaiting the Doctor.
With the Rockets one received a strong dose of the best-bounce-per-ounce people 's music. The hipsters in the audience were evidence of the impossibility of sitting still.
After the Rockets punched their theatrical time-cards and headed presumably for the locker-room, the forever eloquent Captain Beefheart put his best foot forward. Mr. Beefheart failed to introduce the members of his band, but it was obvious that Zoothorn Rollo, Mascara Snake, Rocket Morton and Art Trip were not responsible for the tunes. Instead he had five dopey-looking guys who looked like the '69 backfield for the Stanford football team. In all probability they were California studio musicians; their manufactured musical imaginations seemed to suggest it.
Making it all bearable was the Captain's old style of exaggerated gutteral shouting. He was really very personal about it, often revealing his sexual hang-ups, his need for vacations or his responses to the audience. Much of his performance was blues derivative, often emphasizing the common metaphor, such as shaking peach trees. His musicianship on both harmonica and soprano sax seemed to be an extension of the very same caged animal in him that makes his singing so unreasonable.
Sometimes in the show's course Beefheart's fairy godfather, Del Simons, made an appearance.
Leaping on stage like a kangaroo, he proceeded to lay down some of the same, inspired sax-meaness that is so commendably Beefheart. Del's versatility was mind expanding. One minute he was soft and cuddly on an off-key flute, seconds later he ignited the stage with a "licorice stick" on "Sweet Georgia Brown." Together Del and the Captain performed as two Dixieland musicians given psychedelics.
The audience suffered Beefheart-mania, enticing him with tokes for encores. To wrap it up, Beefheart sang a song all by himself. Following the pre-arranged program Dr. John was last.
The evening had some great moments, good laughs, good brew, loud music, decent people; some of the same type of hedonism I hope to see going on in Ann Arbor this summer.