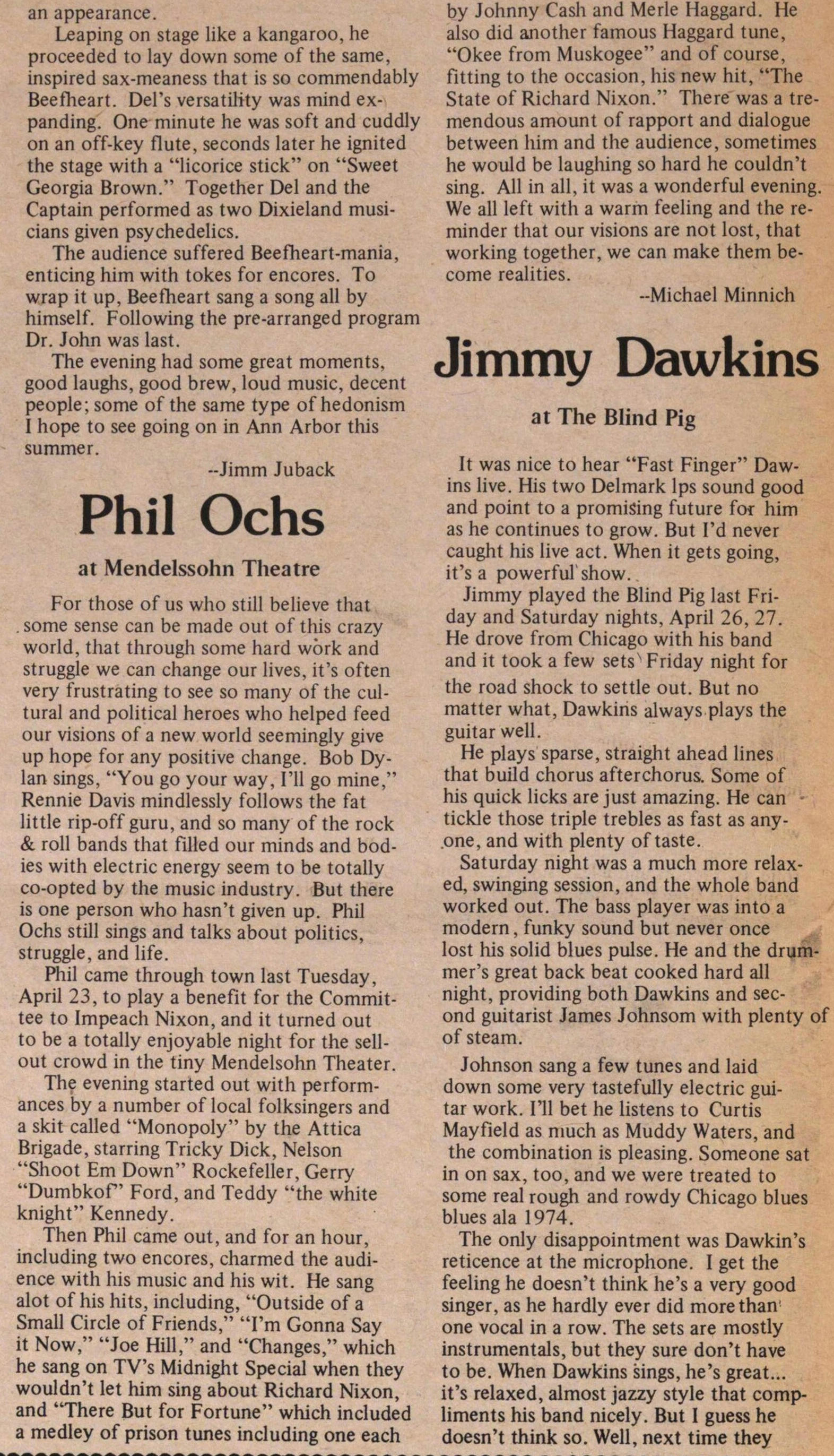 For those of us who still believe that some sense can be made out of this crazy world, that through some hard work and struggle we can change our lives, it's often very frustrating to see so many of the cultural and political heroes who helped feed our visions of a new world seemingly give up hope for any positive change. Bob Dylan sings, "You go your way, I'll go mine," Rennie Davis mindlessly follows the fat little rip-off guru, and so many of the rock & roll bands that filled our minds and bodies with electric energy seem to be totally co-opted by the music industry. But there is one person who hasn't given up. Phil Ochs still sings and talks about politics, struggle, and life.
Phil came through town last Tuesday, April 23, to play a benefit for the Committee to Impeach Nixon, and it turned out to be a totally enjoyable night for the sellout crowd in the tiny Mendelsohn Theater.
The evening started out with performances by a number of local folksingers and a skit called "Monopoly" by the Attica Brigade, starring Tricky Dick, Nelson "Shoot Em Down" Rockefeller, Gerry "Dumbkof" Ford, and Teddy "the white knight" Kennedy.
Then Phil came out, and for an hour, including two encores, charmed the audience with his music and his wit. He sang alot of his hits, including, "Outside of a Small Circle of Friends," 'Tm Gonna Say it Now," "Joe Hill," and "Changes," which he sang on TV's Midnight Special when they wouldn't let him sing about Richard Nixon, and "There But for Fortune" which included a medley of prison tunes including one each by Johnny Cash and Mede Haggard. He also did another famous Haggard tune, "Okee from Muskogee" and of course, fitting to the occasion, his new hit, "The State of Richard Nixon." There was a tremendous amount of rapport and dialogue between him and the audience, sometimes he would be laughing so hard he couldn't sing. All in all, it was a wonderful evening. We all left with a warm feeling and the reminder that our visions are not lost, that working together, we can make them become realities.