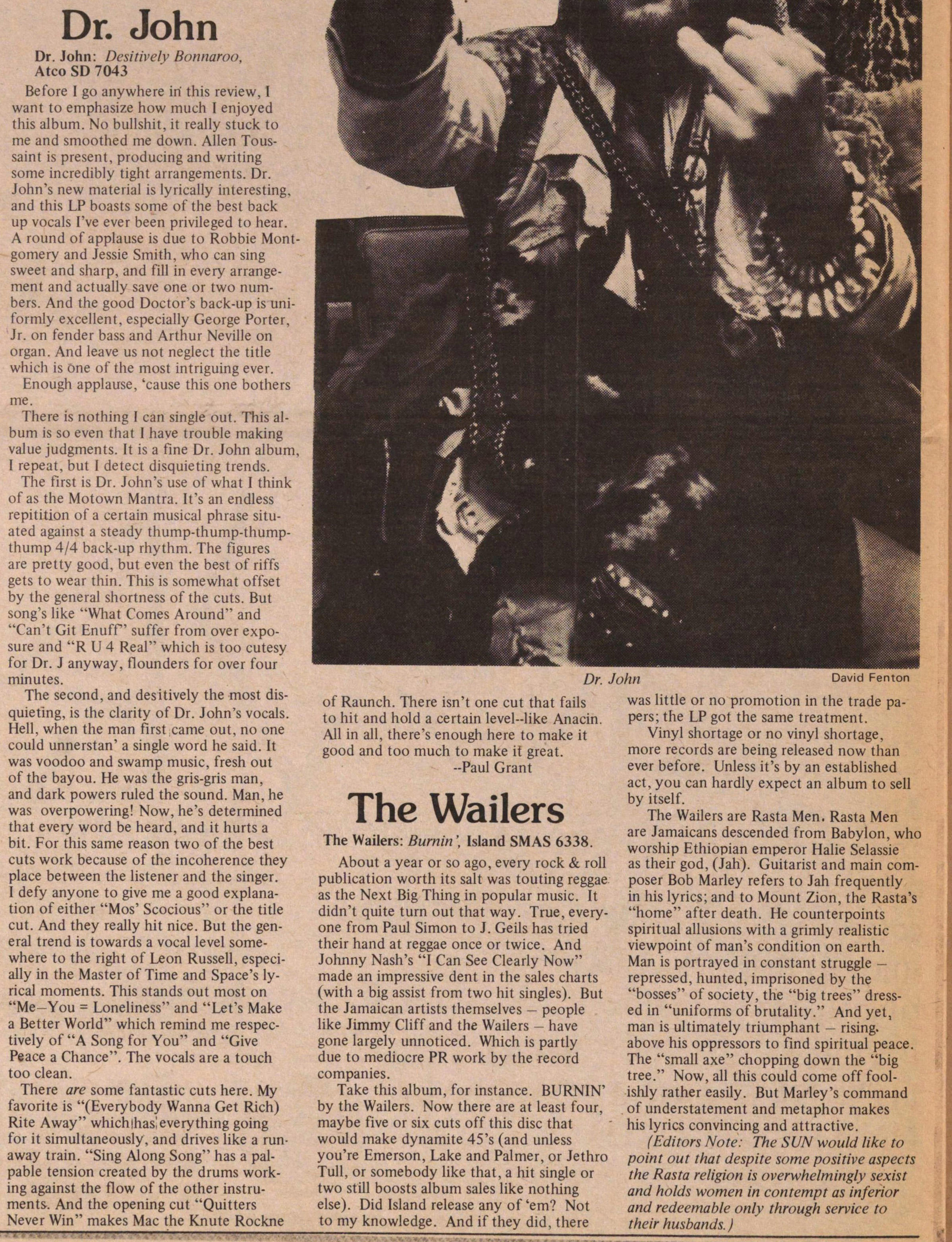 Before I go anywhere in this review, I want to emphasize how much I enjoyed this album. No bullshit, it really stuck to me and smoothed me down. Allen Toussaint is present, producing and writing some incredibly tight arrangements. Dr. John’s new material is lyrically interesting. and this LP boasts some of the best back up vocals I’ve ever been privileged to hear. A round of applause is due to Robbie Montgomery and Jessie Smith, who can sing sweet and sharp, and fill in every arrangement and actually save one or two numbers. And the good Doctor’s back-up is uniformly excellent, especially George Porter, Jr. on fender bass and Arthur Neville on organ. And leave us not neglect the title which is one of the most intriguing ever.

Enough applause, ‘cause this one bothers me.

There is nothing I can single out. This album is so even that I have trouble making value judgments. It is a fine Dr. John album, I repeat, but I detect disquieting trends.

The first is Dr. John’s use of what I think of as the Motown Mantra. It’s an endless repetition of a certain musical phrase situated against a steady thump-thump-thump-thump 4/4 back-up rhythm. The figures are pretty good, but even the best of riffs gets to wear thin. This is somewhat offset by the general shortness of the cuts. But song’s like “What Comes Around” and “Can’t Git Enuff” suffer from over exposure and “R U 4 Real” which is too cutesy for Dr. J anyway, flounders for over four minutes.

The second, and desitively the most disquieting, is the clarity of Dr. John’s vocals. Hell, when the man first came out, no one could unnerstan’ a single word he said. It was voodoo and swamp music, fresh out of the bayou. He was the gris-gris man, and dark powers ruled the sound. Man, he was overpowering! Now, he’s determined that every word be heard, and it hurts a bit. For this same reason two of the best cuts work because of the incoherence they place between the listener and the singer. I defy anyone to give me a good explanation of either “Mos’ Scocious” or the title cut. And they really hit nice. But the general trend is towards a vocal level somewhere to the right of Leon Russell, especially in the Master of Time and Space’s lyrical moments. This stands out most on “Me-You = Loneliness” and “Let’s Make a Better World” which remind me respectively of “A Song for You” and “Give Peace a Chance”. The vocals are a touch too clean.

There are some fantastic cuts here. My favorite is “(Everybody Wanna Get Rich) Rite Away” which has everything going for it simultaneously, and drives like a runaway train. “Sing Along Song” has a palpable tension created by the drums working against the flow of the other instruments. And the opening cut “Quitters Never Win” makes Mac the Knute Rockne of Raunch. There isn’t one cut that fails to hit and hold a certain level--like Anacin. All in all, there’s enough here to make it good and too much to make it great.