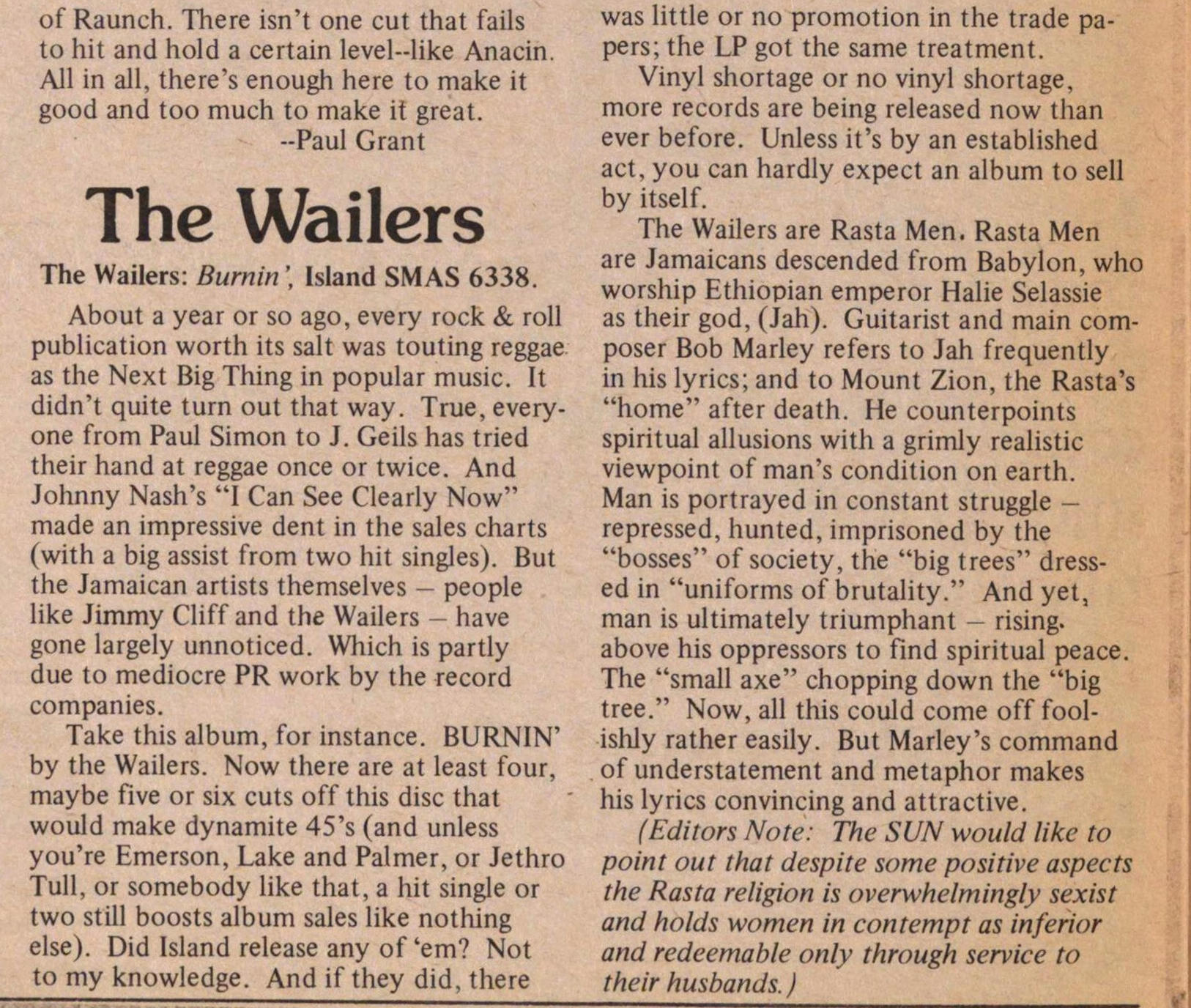 About a year or so ago, every rock & roll publication worth its salt was touting reggae as the Next Big Thing in popular music. It didn’t quite turn out that way. True, everyone from Paul Simon to J. Geils has tried their hand at reggae once or twice. And Johnny Nash’s “I Can See Clearly Now” made an impressive dent in the sales charts (with a big assist from two hit singles). But the Jamaican artists themselves – people like Jimmy Cliff and the Wailers – have gone largely unnoticed. Which is partly due to mediocre PR work by the record companies.

Take this album, for instance. BURNIN’ by the Wailers. Now there are at least four, maybe five or six cuts off this disc that would make dynamite 45’s (and unless you’re Emerson, Lake and Palmer, or Jethro Tull, or somebody like that, a hit single or two still boosts album sales like nothing else). Did Island release any of ‘em? Not to my knowledge. And if they did, there was little or no promotion in the trade papers; the LP got the same treatment.

Vinyl shortage or no vinyl shortage, more records are being released now than ever before. Unless it’s by an established act, you can hardly expect an album to sell by itself.

The Wailers are Rasta Men. Rasta Men are Jamaicans descended from Babylon, who worship Ethiopian emperor Halie Selassie as their god, (Jah). Guitarist and main composer Bob Marley refers to Jah frequently in his lyrics; and to Mount Zion, the Rasta’s “home” after death. He counterpoints spiritual allusions with a grimly realistic viewpoint of man’s condition on earth. Man is portrayed in constant struggle – repressed, hunted, imprisoned by the “bosses” of society, the “big trees” dressed in “uniforms of brutality.” And yet, man is ultimately triumphant – rising above his oppressors to find spiritual peace. The “small axe” chopping down the “big tree.” Now, all this could come off foolishly rather easily. But Marley’s command of understatement and metaphor makes his lyrics convincing and attractive.

(Editors Note: The SUN would like to point out that despite some positive aspects the Rasta religion is overwhelmingly sexist and holds women in contempt as inferior and redeemable only through service to their husbands.)

Marley’s rough-edged, insinuating vocals convey his message with deceptive ease. Lead guitarist Peter Macintosh and percussionist Bunny Livingstone give the band three expressive lead singers. And the group vocals suggest the rich R&B harmonies of the Temptations and/or the Miracles (circa mid-sixties) – while retaining an unusually haunting quality of their own.

The music completes the picture. It is body music first and foremost, and the Wailers handle the subtle rhythms of reggae with deft assurance (an assurance missing from many of the aforementioned attempts at reggae by American and British popstars). Drums, bass, guitars and keyboard form an airtight foundation of Jamaican funk, topped off by occasional fills and quips on organ, electric piano, or synthesizer. It’s an infectiously joyful sound. And in a popular music scene where pseudo-intellectual “seriousness” runs amuck, a little infectious joy would be a welcome relief.

When these elements come together successfully (as they do on 92.1% of the LP, according to my incredibly precise Critic’s Tally), the result is exhilirating – food for the body, mind and soul, almost as heavenly as Mount Zion itself.

I don’t know. Promotional problems aside, maybe reggae is somehow too ornate, too removed from most Americans’ musical tastes, to enjoy more than modest commercial success in the U.S. Nevertheless, the Wailers are there to be heard, and they have much to say. BURNIN’ testifies to that.