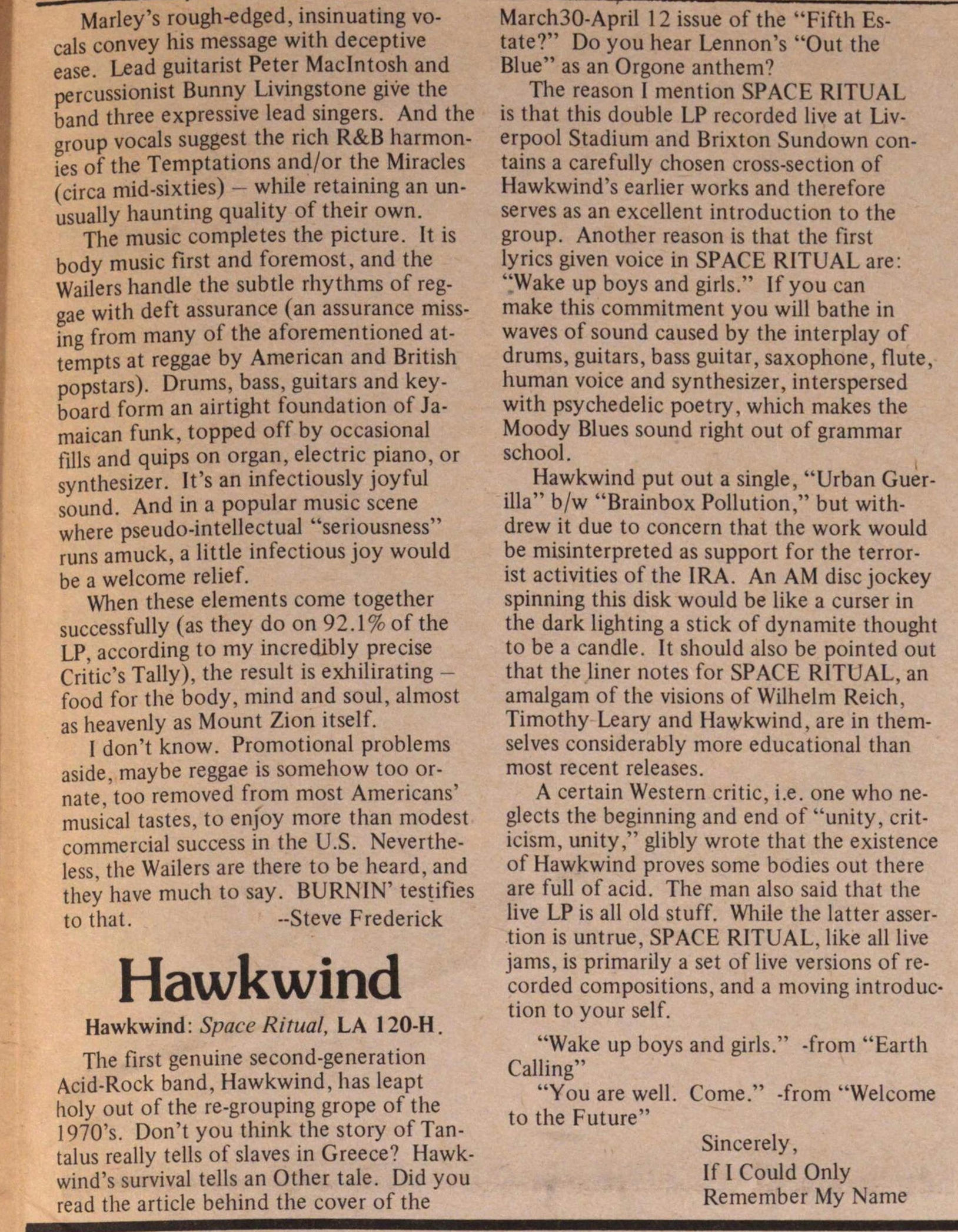 The first genuine second-generation Acid-Rock band, Hawkwind, has leapt holy out of the re-grouping grope of the 1970’s. Don’t you think the story of Tantalus really tells of slaves in Greece? Hawkwind’s survival tells an Other tale. Did you read the article behind the cover of the March30-April 12 issue of the “Fifth Estate?” Do you hear Lennon’s “Out the Blue” as an Orgone anthem?

The reason I mention SPACE RITUAL is that this double LP recorded live at Liverpool Stadium and Brixton Sundown contains a carefully chosen cross-section of Hawkwind’s earlier works and therefore serves as an excellent introduction to the group. Another reason is that the first lyrics given voice in SPACE RITUAL are: “Wake up boys and girls.” If you can make this commitment you will bathe in waves of sound caused by the interplay of drums, guitars, bass guitar, saxophone, flute, human voice and synthesizer, interspersed with psychedelic poetry, which makes the Moody Blues sound right out of grammar school.

Hawkwind put out a single, “Urban Guerilla” b/w “Brainbox Pollution,” but withdrew it due to concern that the work would be misinterpreted as support for the terrorist activities of the IRA. An AM disc jockey spinning this disk would be like a curser in the dark lighting a stick of dynamite thought to be a candle. It should also be pointed out that the liner notes for SPACE RITUAL, an amalgam of the visions of Wilhelm Reich, Timothy Leary and Hawkwind, are in themselves considerably more educational than most recent releases.

A certain Western critic, i.e. one who neglects the beginning and end of “unity, criticism, unity,” glibly wrote that the existence of Hawkwind proves some bodies out there are full of acid. The man also said that the live LP is all old stuff. While the latter assertion is untrue, SPACE RITUAL, like all live jams, is primarily a set of live versions of recorded compositions, and a moving introduction to your self.

“Wake up boys and girls.” -from “Earth Calling”

“You are well. Come.” -from “Welcome to the Future”

Sincerely,
If I Could Only
Remember My Name