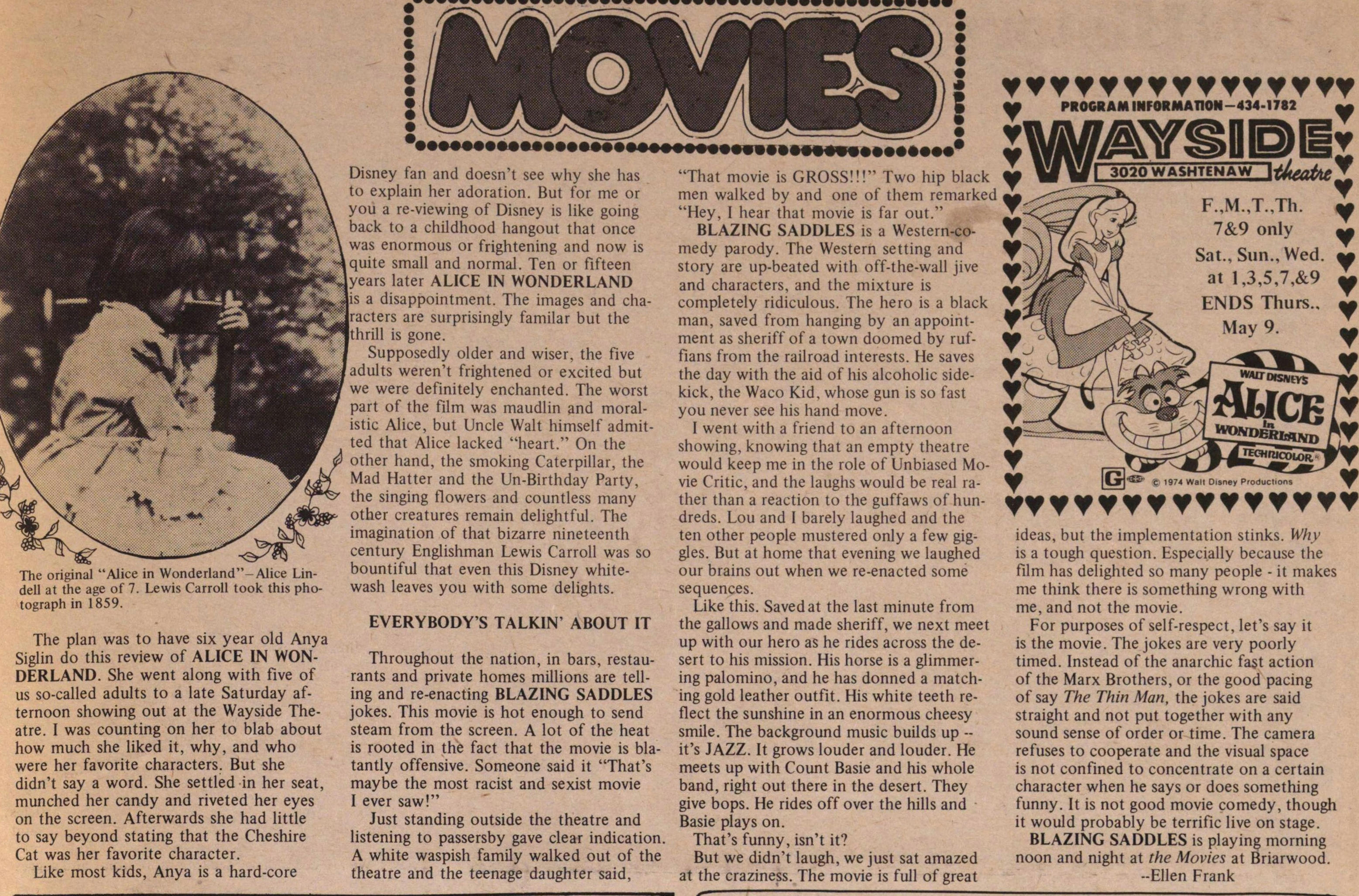 The plan was to have six year old Anya Siglin do this review of ALICE IN WONDERLAND. She went along with five of us so-called adults to a late Saturday afternoon showing out at the Wayside Theatre. I was counting on her to blab about how much she liked it, why, and who were her favorite characters. But she didn't say a word. She settled in her seat, munched her candy and riveted her eyes on the screen. Afterwards she had little to say beyond stating that the Cheshire Cat was her favorite character.

Like most kids, Anya is a hard-core Disney fan and doesn't see why she has to explain her adoration. But for me or you a re-viewing of Disney is like going back to a childhood hangout that once was enormous or frightening and now is quite small and normal. Ten or fifteen years later ALICE IN WONDERLAND is a disappointment. The images and characters are surprisingly familiar but the thrill is gone.

Supposedly older and wiser, the five adults weren't frightened or excited but we were definitely enchanted. The worst part of the film was maudlin and moralistic Alice, but Uncle Walt himself admitted that Alice lacked "heart." On the other hand, the smoking Caterpillar, the Mad Hatter and the Un-Birthday Party, the singing flowers and countless many other creatures remain delightful. The imagination of that bizarre nineteenth century Englishman Lewis Carroll was so bountiful that even this Disney whitewash leaves you with some delights.

EVERYBODY'S TALKIN' ABOUT IT

Throughout the nation, in bars, restaurants and private homes millions are telling and re-enacting BLAZING SADDLES jokes. This movie is hot enough to send steam from the screen. A lot of the heat is rooted in the fact that the movie is blatantly offensive. Someone said it "That's maybe the most racist and sexist movie I ever saw!"

Just standing outside the theatre and listening to passersby gave clear indication. A white waspish family walked out of the theatre and the teenage daughter said, "That movie is GROSS!" Two hip black men walked by and one of them remarked "Hey, I hear that movie is far out."

BLAZING SADDLES is a Western-comedy parody. The Western setting and story are up-beated with off-the-wall jive and characters, and the mixture is completely ridiculous. The hero is a black man, saved from hanging by an appointment as sheriff of a town doomed by ruffians from the railroad interests. He saves the day with the aid of his alcoholic sidekick, the Waco Kid, whose gun is so fast you never see his hand move.

I went with a friend to an afternoon showing, knowing that an empty theatre would keep me in the role of Unbiased Movie Critic, and the laughs would be real rather than a reaction to the guffaws of hundreds. Lou and I barely laughed and the ten other people mustered only a few giggles. But at home that evening we laughed our brains out when we re-enacted some sequences.

Like this. Saved at the last minute from the gallows and made sheriff, we next meet up with our hero as he rides across the desert to his mission. His horse is a glimmering palomino, and he has donned a matching gold leather outfit. His white teeth reflect the sunshine in an enormous cheesy smile. The background music builds up -- it's JAZZ. It grows louder and louder. He meets up with Count Basie and his whole band, right out there in the desert. They give bops. He rides off over the hills and Basie plays on.

But we didn't laugh, we just sat amazed at the craziness. The movie is full of great ideas, but the implementation stinks. Why is a tough question. Especially because the film has delighted so many people - it makes me think there is something wrong with me, and not the movie.

For purposes of self-respect, let's say it is the movie. The jokes are very poorly timed. Instead of the anarchic fast action of the Marx Brothers, or the good pacing of say The Thin Man, the jokes are said straight and not put together with any sound sense of order or time. The camera refuses to cooperate and the visual space is not confined to concentrate on a certain character when he says or does something funny. It is not good movie comedy, though it would probably be terrific live on stage.

BLAZING SADDLES is playing morning noon and night at the Movies at Briarwood.

The original "Alice in Alice Undell at the age of 7. Lewis Carroll took this photograph in 1859.