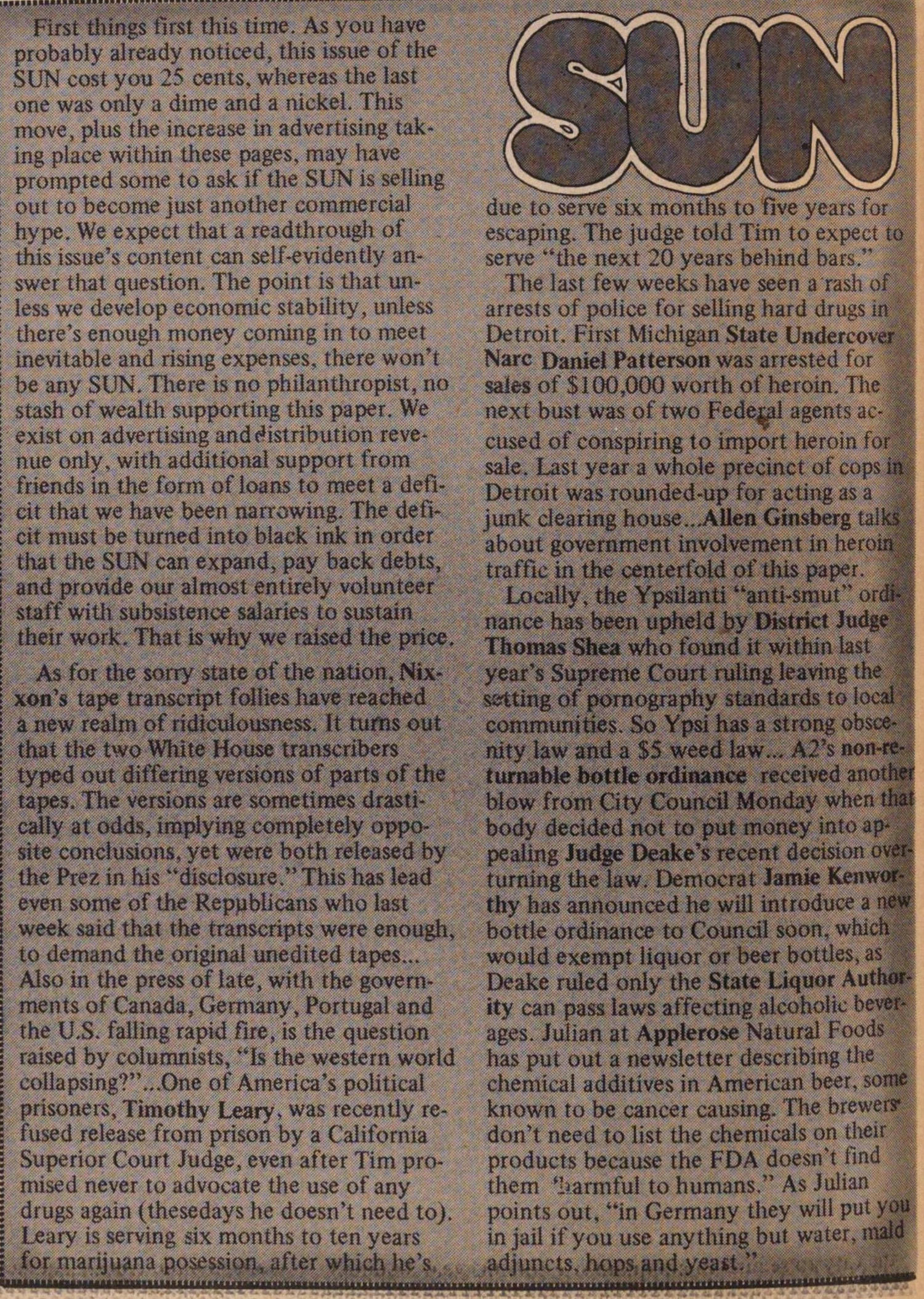 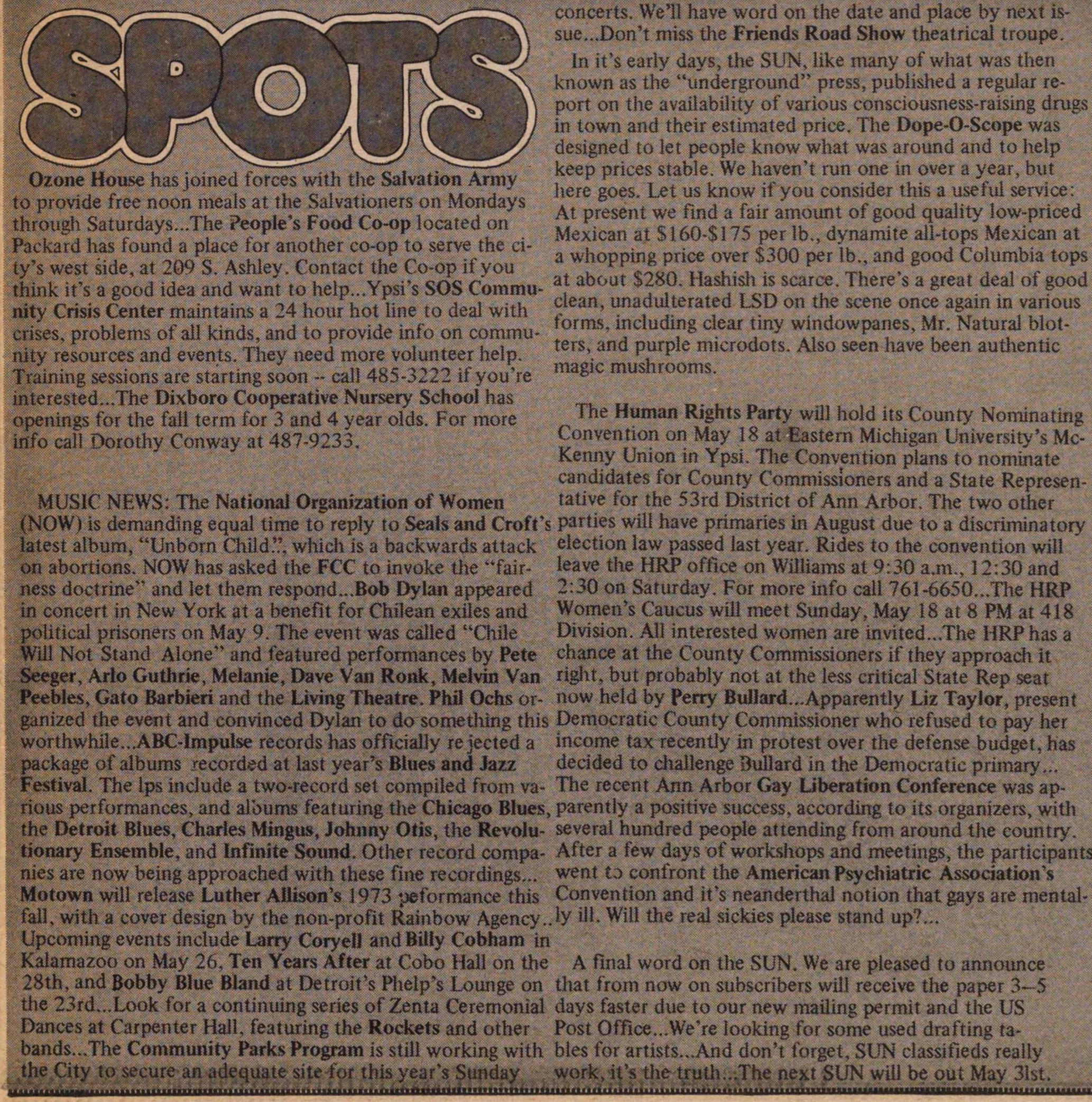 First things first this time. As you have probably already noticed, this issue of the SUN cost you 25 cents, whereas the last one was only a dime and a nickel. This move, plus the increase in advertising taking place within these pages, may have prompted some to ask if the SUN is selling out to become just another commercial hype. We expect that a readthrough of this issue's content can self-evidently answer that question. The point is that unless we develop economic stability, unless there's enough money coming in to meet inevitable and rising expenses, there won't be any SUN. There is no philanthropist, no stash of wealth supporting this paper. We exist on advertising and distribution revenue only, with additional support from friends in the form of loans to meet a deficit that we have been narrowing. The deficit must be turned into black ink in order that the SUN can expand, pay back debts, and provide our almost entirely volunteer staff with subsistence salaries to sustain their work. That is why we raised the price.

As for the sorry state of the nation, Nixon's tape transcript follies have reached a new realm of ridiculousness. It turns out I that the two White House transcribers typed out differing versions of parts of the tapes. The versions are sometimes drastically at odds, implying completely opposite conclusions, yet were both released by the Prez in his "disclosure." This has lead even some of the Republicans who last week said that the transcripts were enough, to demand the original unedited tapes...Also in the press of late, with the government of Canada, Germany, Portugal and the U.S. falling rapid fire, is the question : raised by columnists, "is the western world collapsing?"...One of America's political  prisoners, Timothy Leary, was refused release from prison by a California Superior Court Judge, even after Tim promised never to advocate the use of any drugs again (these days he doesn't need to). Leary is serving six months to ten years for marijuana possession after which, he's due to serve six months to five years for escaping. The judge told Tim to expect to serve "the next 20 years behind bars."

The last few weeks have seen a rash of arrests of police for selling hard drugs in Detroit. First Michigan State Undercover Narc Daniel Patterson was arrested for sales of $100,000 worth of heroin. The next bust was of two Federal agents accused of conspiring to import heroin for sale. Last year a whole precinct of cops in Detroit was rounded-up for acting as a junk clearing house. Allen Ginsberg talks about government involvement in hen traffic in the centerfold of this paper.

Locally, the Ypsilanti "anti-smut" ordinance has been upheld by District Judge Thomas Shea who found it within last year's Supreme Court ruling leaving the setting of pornography standards to local communities. So Ypsi has a strong obscenity law and a $5 weed law... A2's non-returnable bottle ordinance received another blow from City Council Monday when that body decided not to put money into appealing Judge Deake's recent decision overturning the law. Democrat Jamie Kenworthy has announced he will introduce a new bottle ordinance to Council soon, which would exempt liquor or beer bottles, as Deake ruled only the State Liquor Authority can pass laws affecting alcoholic beverages. Julian at Applerose Natural Foods has put out a newsletter describing the chemical additives in American beer, some known to be cancer causing. The brewers don't need to list the chemicals on their products because the FDA doesn't find them "harmful to humans." As Julian points out, "in Germany they will put y in jail if you use anything but water, mald adjuncts, hops, and yeast."

Ozone House has joined forces with the Salvation Army to provide free noon meals at the Salvationers on Mondays through Saturdays...The People's Food Co-op located on Packard has found a place for another co-op to serve the city's west side, at 209 S. Ashley. Contact the Co-op if you think it's a good idea and want to help...Ypsi's SOS Community Crisis Center maintains a 24 hour hot line to deal with crises, problems of all kinds, and to provide info on community resources and events. They need more volunteer help. Training sessions are starting soon - call 485-3222 if you're interested,..The Dixboro Cooperative Nursery School has openings for the fall term for 3 and 4 year olds. For more info call Dorothy Conway at 487-9233.

MUSIC NEWS: The National Organization of Women (NOW) is demanding equal time to reply to Seals and Croft's latest album, "Unborn Child," which is a backwards attack on abortions. NOW has asked the FCC to invoke the "fairness doctrine" and let them respond...Bob Dylan appeared in concert in New York at a benefit for Chilean exiles and political prisoners on May 9. The event was called "Chile Will Not Stand Alone" and featured performances by Pete Seeger, Arlo Guthrie, Melanie, Dave Van Ronk, Melvin Van Peebles, Gato Barbieri and the Living Theatre. Phil Ochs organized the event and convinced Dylan to do something this worthwhile...ABC-Impulse records has officially rejected a package of albums recorded at last year's Blues and Jazz Festival. The lps include a two-record set compiled from various performances, and albums featuring the Chicago Blues, the Detroit Blues, Charles Mingus, Johnny Otis, the Revolutionary Ensemble, and Infinite Sound. Other record companies are now being approached with these fine recordings... Motown will release Luther Allison's 1973 performance this fall with a cover design by the non-profit Rainbow Agency. Upcoming events include Larry Coryell and Billy Cobham in Kalamazoo on May 26. Ten Years After at Cobo Hall on the 28th, and Bobby Blue Bland at Detroit's Phelp's Lounge on the 23rd...Look for a continuing series of Zenta Ceremonial Dances at Carpenter Hall, featuring the Rockets and other bands...The Community Parks Program is still working with the City to secure an adequate site for this year's Sunday concerts. We'll have word on the date and place by next issue...Don't miss the Friends Road Show theatrical troupe.

In t's early days, the SUN, like many of what was then known as the "underground" press, published a regular report on the availability of various consciousness-raising drugs in town and their estimated price. The Dope-O-Scope was designed to let people know what was around and to help keep prices stable. We haven't run one in over a year, but here goes. Let us know if you consider this a useful service: At present we find a fair amount of good quality low-priced Mexican at $160-$175 per lb., dynamite all-tops Mexican at a whopping price over $300 per lb., and good Columbia tops at about $280. Hashish is scarce. There's a great deal of good clean, unadulterated LSD on the scene once again in various forms, including clear tiny windowpanes, Mr. Natural blotters, and purple microdots. Also seen have been authentic magic mushrooms.

The Human Rights Party will hold its County Nominating Convention on May 18 at Eastern Michigan University's McKenny Union in Ypsi. The Convention plans to nominate candidates for County Commissioners and a State Representative for the 53rd District of Ann Arbor. The two other parties will have primaries in August due to a discriminatory election law passed last year. Rides to the convention will leave the HRP office on Williams at 9:30 a.m., 1 2:30 and 2:30 on Saturday. For more info call 761-6650...The HRP Women's Caucus will meet Sunday, May 18 at 8 PM at 418 Division. A;; interested women are invited...The HRP has a chance at the County Commissioners if they approach it right, but probably not at the less critical State Rep seat now held by Perry Bullard...Apparently Liz Taylor, present Democratic County Commissioner who refused to pay her income tax recently in protest over the defense budget, has decided to challenge Bullard in the Democratic primary... The recent Ann Arbor Gay Liberation Conference was apparently a positive success, according to its organizers, with several hundred people attending from around the country. After a few days of workshops and meetings, the participants went to confront the American Psychiatric Association's Convention and it's neanderthal notion that gays are mentally ill. Will the real sickies please stand up?...

A final word on the SUN. We are pleased to announce that from now on subscribers will receive the paper 3-5 days faster due to our new mailing permit and the US Post Office...We're looking for some used drafting tables for artists...And don't forget, SUN classifieds really work, it's the truth..,The next SUN will be out May 31st.