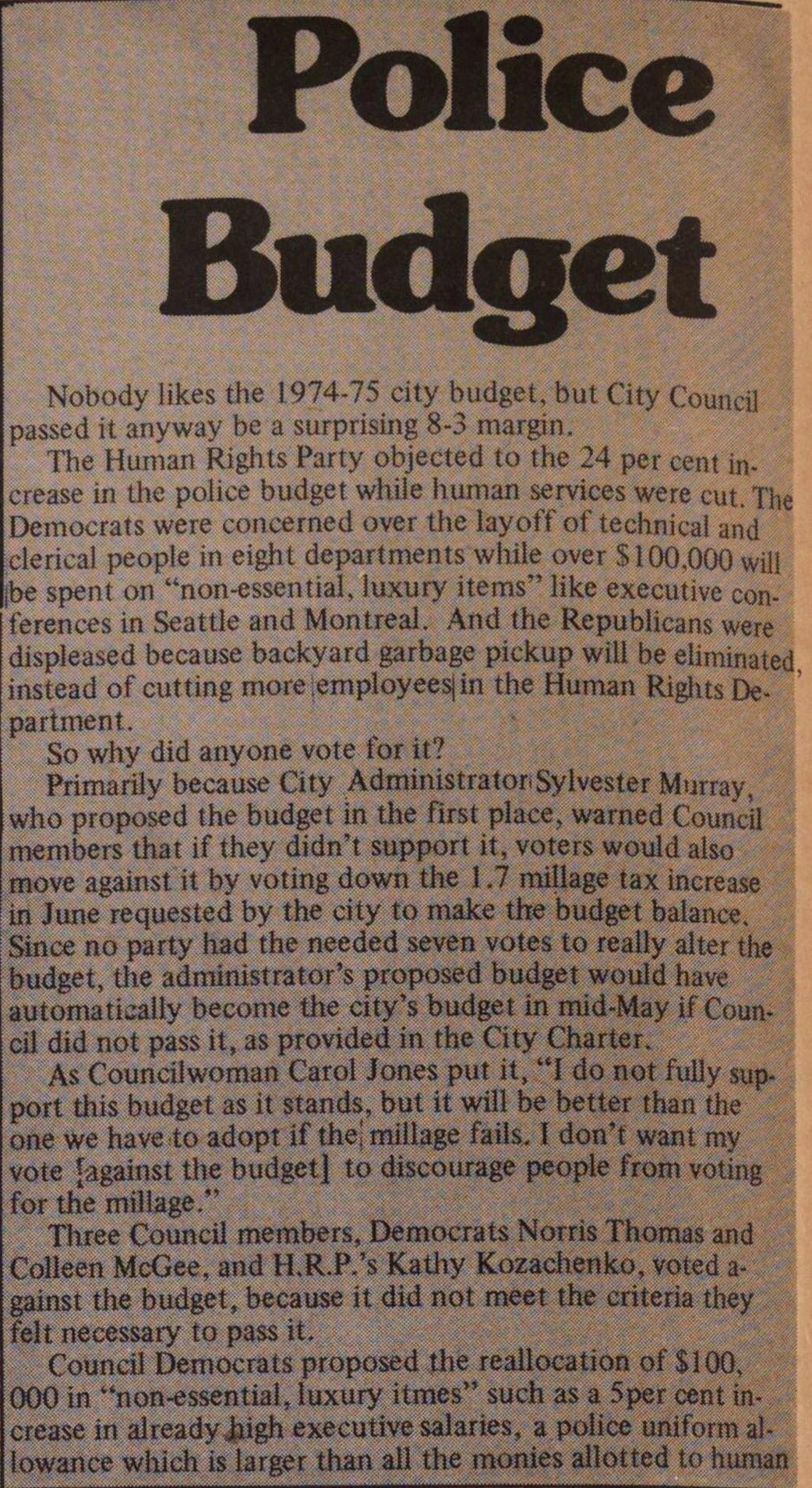 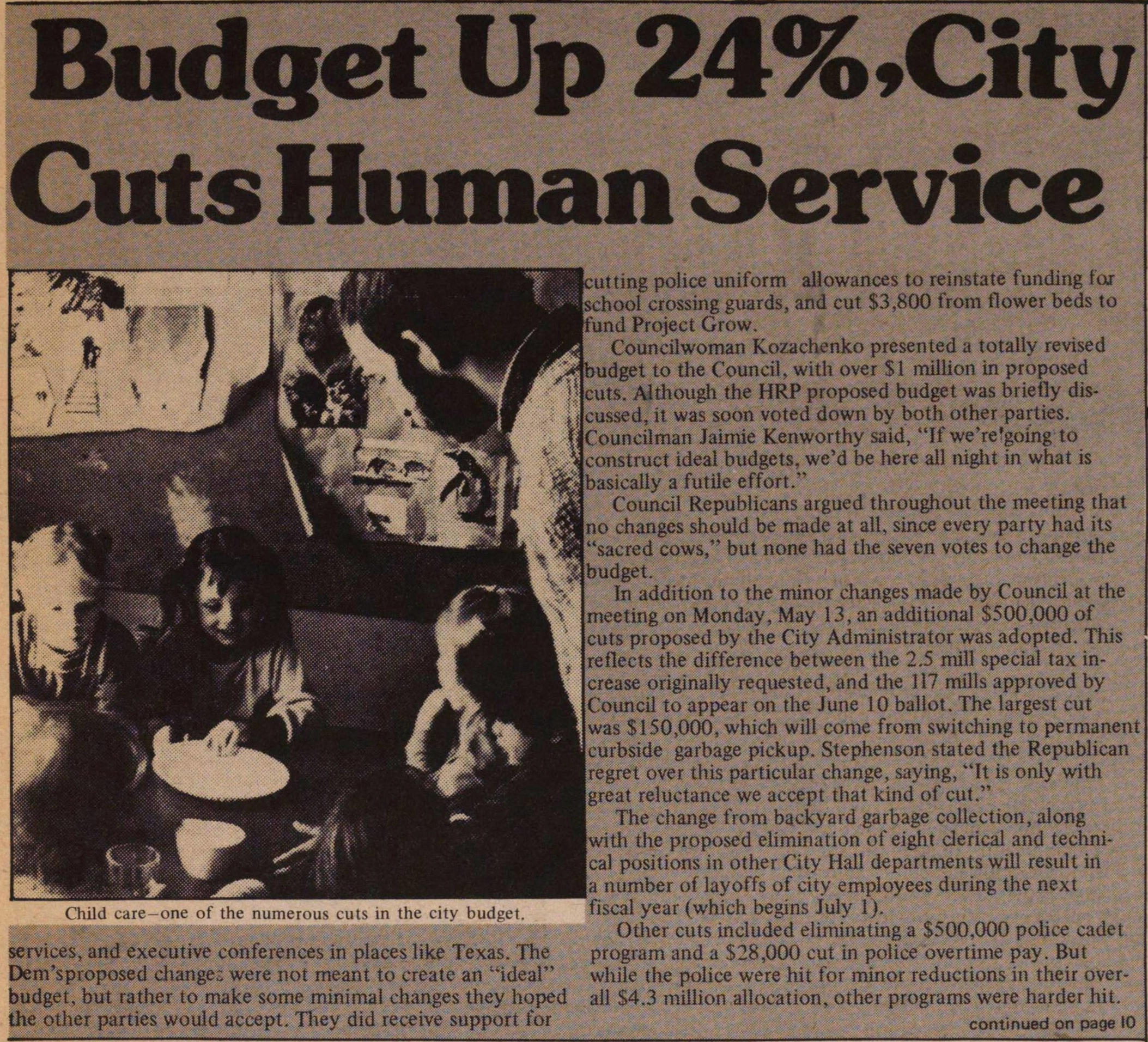 Nobody likes the 1974-75 city budget, but City Council passed it anyway be a surprising 8-3 margin.

The Human Rights Party objected to the 24 per cent increase in the police budget while human services were tut. The Democrats were concerned over the layoff of technical and clerical people in eight departments while over $100,000 will be spent on "non-essential, luxury items" like executive conferences in Seattle and Montreal. And the Republicans were displeased because backyard garbage pickup will be eliminated instead of cutting more employees in the Human Rights Department.

So why did anyone vote for it?

Primarily because City Administrator Sylvester Murray, who proposed the budget in the first place, warned Council members that if they didn't support it, voters would also move against it by voting down the 1 .7 millage tax increase in June requested by the city to make the budget balance, Since no party had the needed seven votes to really alter the budget, the administrator's proposed budget would have automatically become the city's budget in mid-May if Council did not pass it, as provided in the City Charter.

As Councilwoman Carol Jones put it, "I do not fully support this budget as it stands, but it will be better than the one we have to adopt if the millage fails. I don't want my vote against the budget to discourage people from voting for the millage."

Three Council members, Democrats Norris Thomas and Colleen McGee, and H.R.P.'s Kathy Kozachenko, voted against the budget, because it did not meet the criteria they felt necessary to pass it.

Council Democrats proposed the reallocation of $100,000 in "non-essential, luxury items" such as a 5 percent increase in already high executive salaries, a police uniform allowance which is larger than all the monies allotted to human services, and executive conferences in places like Texas.

The Dem's proposed changes were not meant to create an "ideal" budget, but rather to make some minimal changes they hoped the other parties would accept. They did receive support for cutting police uniform allowances to reinstate funding for school crossing guards, and cut $3,800 from flower beds to fund Project Grow.

Councilwoman Kozachenko presented a totally revised budget to the Council, with over SI million in proposed cuts. Although the HRP proposed budget was briefly discussed, it was soon voted down by both other parties. Councilman Jaimie Kenworthy said, "If we're'going to construct ideal budgets, we'd be here all night in what is basically a futile effort."

Council Republicans argued throughout the meeting that no changes should be made at all, since every party had its "sacred cows," but none had the seven votes to change the budget.

In addition to the minor changes made by Council at the meeting on Monday, May 13, an additional $500,000 of cuts proposed by the City Administrator was adopted. This reflects the difference between the 2.5 mill special tax increase originally requested, and the 117 mills approved by Council to appear on the June 10 ballot. The largest cut was $150,000, which wilt come from switching to permanent curbside garbage pickup. Stephenson stated the Republican regret over this particular change, saying, "It is only with great reluctance we accept that kind of cut."

The change from backyard garbage collection, along with the proposed elimination of eight clerical and technical positions in other City Hall departments will result in a number of layoffs of city employees during the next fiscal year (which begins July 1 ).

Other cuts included eliminating a $500,000 police cadet program and a $28,000 cut in police overtime pay. But while the police were hit for minor reductions in their overall $4.3 million allocation, other programs were harder hit.