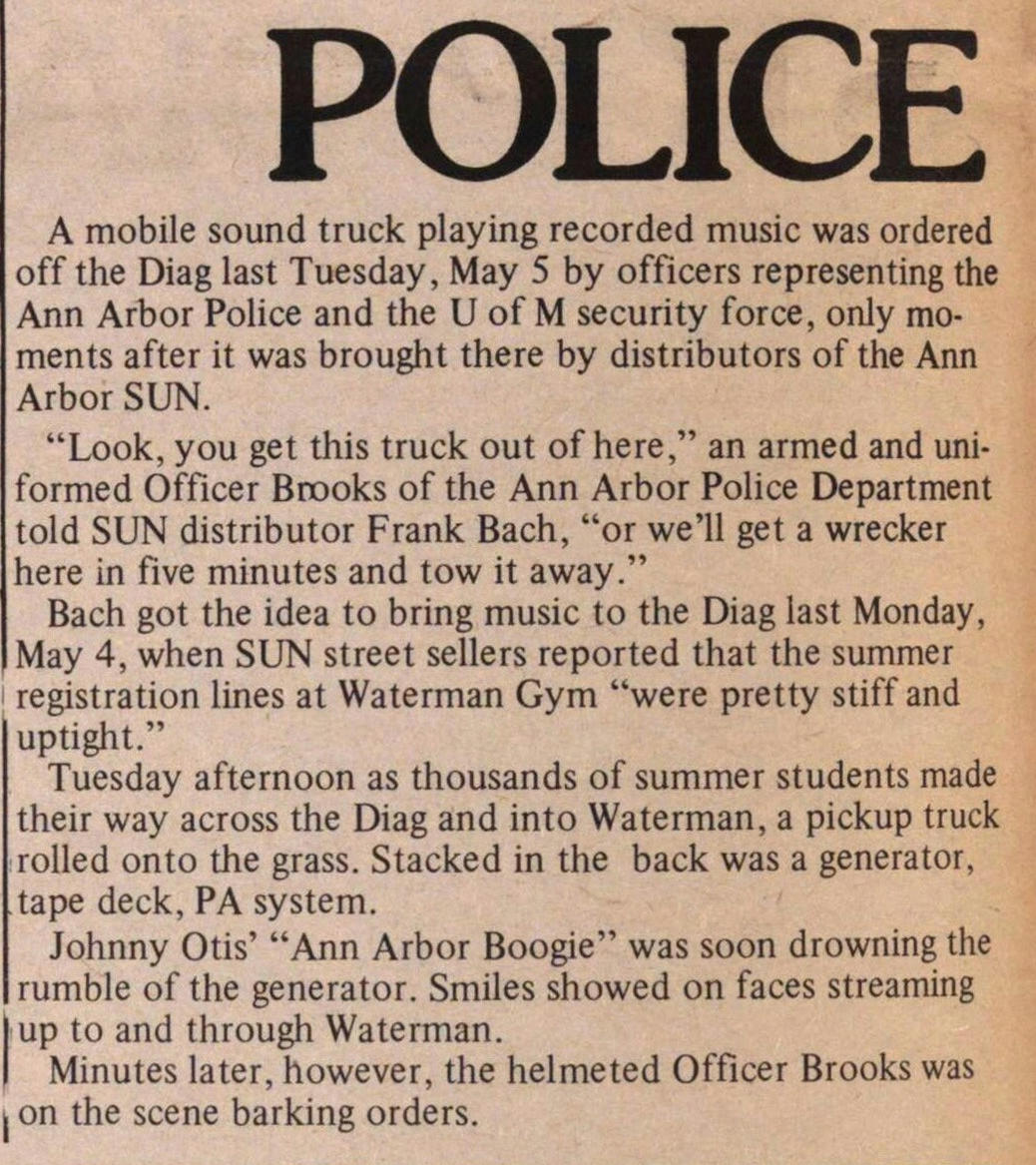 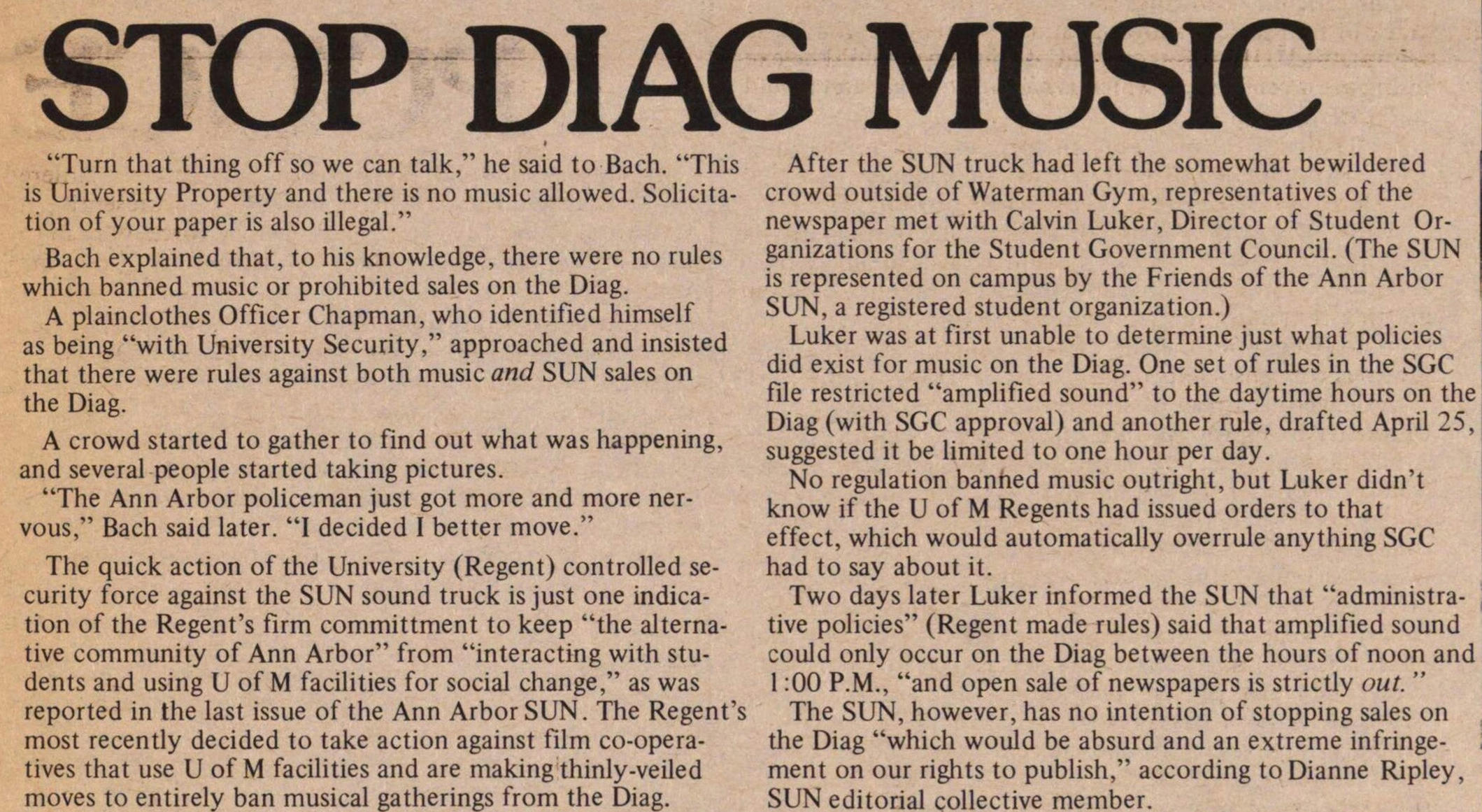 A mobile sound truck playing recorded music was ordered off the Diag last Tuesday, May 5 by officers representing the Ann Arbor Police and the U of M security force, only moments after it was brought there by distributors of the Ann Arbor SUN.

"Look, you get this truck out of here," an armed and uniformed Officer Brooks of the Ann Arbor Police Department told SUN distributor Frank Bach, "or we'll get a wrecker here in five minutes and tow it away."

Bach got the idea to bring music to the Diag last Monday, May 4, when SUN street sellers reported that the summer registration lines at Waterman Gym "were pretty stiff and uptight."

Tuesday afternoon as thousands of summer students made their way across the Diag and into Waterman, a pickup truck rolled onto the grass. Stacked in the back was a generator, tape deck, PA system.

Johnny Otis' "Ann Arbor Boogie" was soon drowning the rumble of the generator. Smiles showed on faces streaming up to and through Waterman.

Minutes later, however, the helmeted Officer Brooks was I on the scene barking orders.

"Turn that thing off so we can talk," he said to Bach. "This is University Property and there is no music allowed. Solicitation of your paper is also illegal."

Bach explained that, to his knowledge, there were no rules which banned music or prohibited sales on the Diag.

A plainclothes Officer Chapman, who identified himself as being "with University Security," approached and insisted that there were rules against both music and SUN sales on the Diag.

A crowd started to gather to find out what was happening, and several people started taking pictures.

The quick action of the University (Regent) controlled security force against the SUN sound truck is just one indication of the Regent's firm committment to keep "the alternative community of Ann Arbor" from "interacting with students and using U of M facilities for social change," as was reported in the last issue of the Ann Arbor SUN. The Regent's most recently decided to take action against film co-operatives that use U of M facilities and are making thinly-veiled moves to entirely ban musical gatherings from the Diag.

After the SUN truck had left the somewhat bewildered crowd outside of Waterman Gym, representatives of the newspaper met with Calvin Luker, Director of Student Organizations for the Student Government Council. (The SUN is represented on campus by the Friends of the Ann Arbor SUN, a registered student organization.)

Luker was at first unable to determine just what policies did exist for music on the Diag. One set of rules in the SGC file restricted "amplified sound" to the daytime hours on the Diag (with SGC approval) and another rule, drafted April 25, suggested it be limited to one hour per day.

No regulation banned music outright, but Luker didn't know if the U of M Regents had issued orders to that effect, which would automatically overrule anything SGC had to say about it.

Two days later Luker informed the SUN that "administrative policies" (Regent made rules) said that amplified sound could only occur on the Diag between the hours of noon and 1 :00 P.M., "and open sale of newspapers is strictly out."

The SUN, however, has no intention of stopping sales on the Diag "which would be absurd and an extreme infringement on our rights to publish," according to Dianne Ripley, SUN editorial collective member.