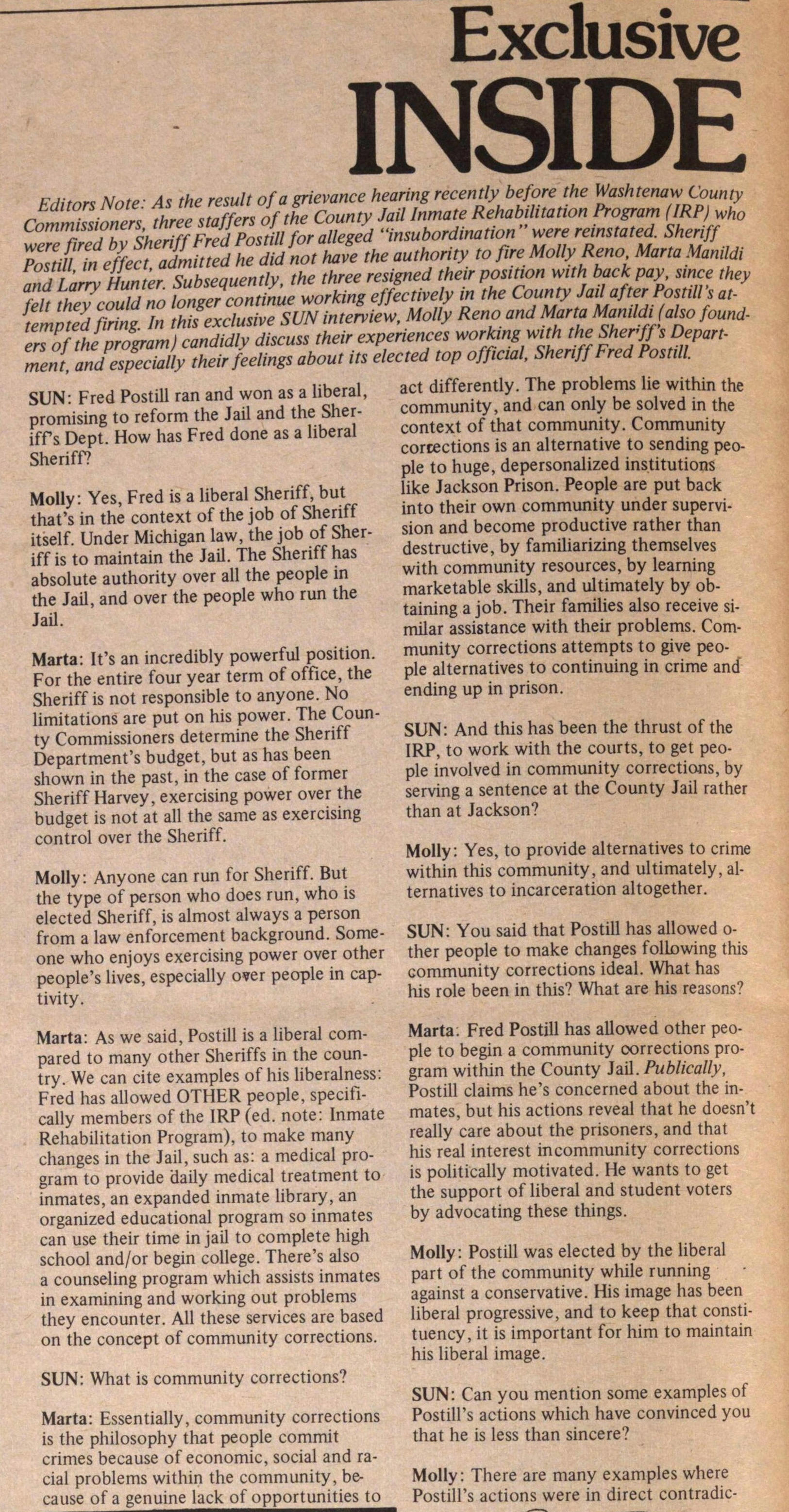 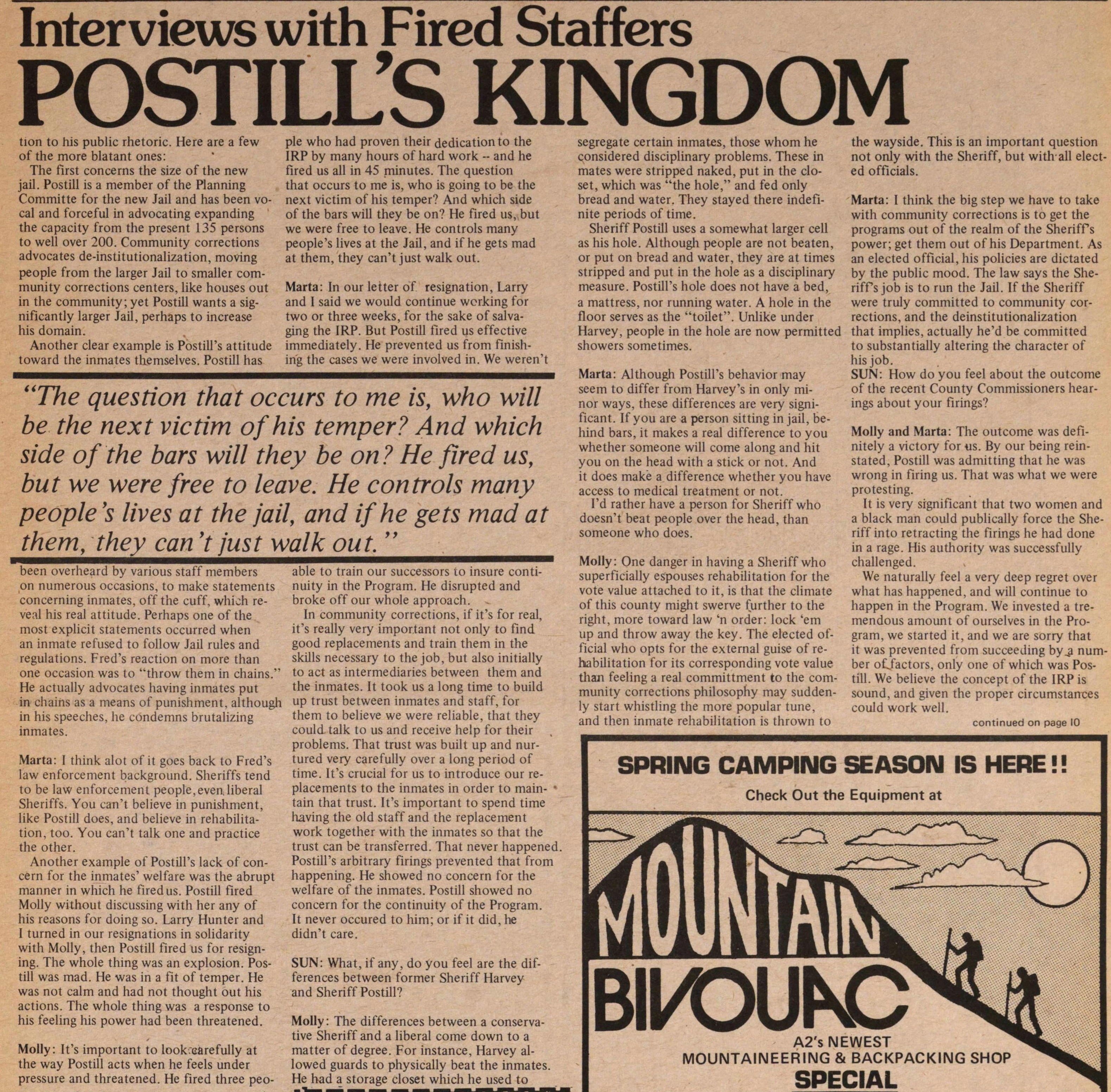 Exclusive INSIDE
Editors Note: As the result of a grievance hearing recently before the Washtenaw County Commissioners, three staffers  of the County Jail Inmate Rehabilitation Program (IRP) who were fired by Sheriff Fred Postill for alleged "insubordination" were reinstated. Sheriff Postill, in effect, admitted he did nt have the authority to fire Molly Reno, Marta Manildi and Larry Hunter. Subsequently, the three resigned their position with back pay, since they felt they could no longer continue working effectively in the County Jail after Postill's attempted firing. In this exclusive SUN interview, Molly Reno and Marta Manildi (also founders of the program) candidly discuss their experiences working with the Sheriffs Department and especially their feelings about its elected top official, Sheriff Fred Postill.

SUN: Fred Postill ran and won as a liberal, promising to reform the Jail and the Sheriff s Dept. How has Fred done as a liberal Sheriff?

Marta: It's an incredibly powerful position. For the entire four year term of office, the Sheriff is not responsible to anyone. No limitations are put on his power. The County Commissioners determine the Sheriff Department's budget, but as has been shown in the past, in the case of former Sheriff Harvey, exercising power over the budget is not at all the same as exercising control over the Sheriff.

Molly: Anyone can run for Sheriff. But the type of person who does run, who is elected Sheriff, is almost always a person from a law enforcement background. Someone who enjoys exercising power over other people's lives, especially over people in captivity.

Marta: As we said, Postill is a liberal compared to many other Sheriffs in the country. We can cite examples of his liberalness: Fred has allowed OTHER people, specifically members of the IRP (ed. note: Inmate Rehabilitation Program), to make many changes in the Jail, such as: a medical program to provide daily medical treatment to inmates, an expanded inmate library, an organized educational program so inmates can use their time in jail to complete high school and or begin college. There's also a counseling program which assists inmates in examining and working out problems they encounter. All these services are based on the concept of community corrections.

SUN: What is community corrections?

Marta: Essentially, community corrections is the philosophy that people commit crimes because of economic, social and racial problems within the community, because of a genuine lack of opportunities to act differently. The problems lie within the community, and can only be solved in the context of that community. Community corrections is an alternative to sending people to huge, depersonalized institutions like Jackson Prison. People are put back into their own community under supervision and become productive rather than destructive, by familiarizing themselves with community resources, by learning marketable skills, and ultimately by obtaining a job. Their families also receive similar assistance with their problems. Community corrections attempts to give people alternatives to continuing in crime and ending up in prison.

SUN: And this has been the thrust of the IRP, to work with the courts, to get people involved in community corrections, by serving a sentence at the County Jail rather than at Jackson?

SUN: You said that Postill has allowed other people to make changes following this community corrections ideal. What has his role been in this? What are his reasons?

Marta. Fred Postill has allowed other people to begin a community corrections program within the County Jail. Publically, Postill claims he's concerned about the inmates, but his actions reveal that he doesn't really care about the prisoners, and that his real interest in community corrections is politically motivated. He wants to get the support of liberal and student voters by advocating these things.

Molly: Postill was elected by the liberal part of the community while running against a conservative. His image has been liberal progressive, and to keep that constituency, it is important for him to maintain his liberal image.

SUN: Can you mention some examples of Postill's actions which have convinced you that he is less than sincere?

Molly: There are many examples where Postill's actions were in direct contradiction to his public rhetoric. Here are a few of the more blatant ones: The first concerns the size of the new jail. Postill is a member of the Planning Committee for the new Jail and has been vocal and forceful in advocating expanding the capacity from the present 135 persons to well over 200. Community corrections advocates de-institutionalization, moving people from the larger Jail to smaller community corrections centers, like houses out in the community; yet Postill wants a significantly larger Jail, perhaps to increase his domain. Another clear example is Postill's attitude toward the inmates themselves. Postill has been overheard by various staff members on numerous occasions, to make statements concerning inmates, off the cuff, which reveal his real attitude. Perhaps one of the most explicit statements occurred when an inmate refused to follow Jail rules and regulations. Fred's reaction on more than one occasion was lo "throw them in chains." He actually advocates having inmates put in chains as a means of punishment. although in his speeches, he condemns brutalizing inmates.

Marta: I think alot of it goes back to Fred's law enforcement background. Sheriffs tend to be law enforcement people, even, liberal Sheriffs. You can't believe in punishment, like Postill does, and believe in rehabilitation, too. You can't talk one and practice the other.
Another example of Postill's lack of concern for the inmates' welfare was the abrupt manner in which he fired us. Postill fired Molly without discussing with her any of his reasons for doing so. Larry Hunter and I turned in our resignations in solidarity with Molly, then Postill fired us for resigning. The whole thing was an explosion. Postill was mad. He was in a fit of temper. He was not calm and had not thought out his actions. The whole thing was a response to his feeling his power had been threatened.

Molly: It's important to look carefully at the way Postill acts when he feels under pressure and threatened. He fired three people who had proven their dedication to the IRP by many hours of hard work -- and he fired us all in 45 minutes. The question that occurs to me is, who is going to be the next victim of his temper? And which side of the bars will they be on? He fired us, but we were free to leave. He controls many people's lives at the Jail, and if he gets mad at them, they can't just walk out.

Marta: In our letter of resignation, Larry and I said we would continue working for two or three weeks, for the sake of salvaging the IRP. But Postill fired us effective immediately. He prevented us from finishing the cases we were involved in. We weren't able to train our successors to insure continuity in the Program. He disrupted and broke off our whole approach.
In community corrections, if it's for real, it's really very important not on]y to find good replacements and train them in the skills necessary to the job, but also initially to act as intermediaries between them and the inmates. It took us a long time to build up trust between inmates and staff, for them to believe we were reliable, that they could talk to us and receive help for their problems. That trust was built up and nurtured very carefully over a long period of time. It's crucial for us to introduce our replacements to the inmates in order to maintain that trust. It's important to spend time having the old staff and the replacement work together with the inmates so that the trust can be transferred. That never happened. Postill's arbitrary firings prevented that from happening. He showed no concern for the welfare of the inmates. Postill showed no concern for the continuity of the Program. It never occured to him; or if it did, he didn't care.

SUN: What, if any , do you feel are the differences between former Sheriff Harvey and Sheriff Postill?

Molly: The differences between a conservative Sheriff and a liberal come down to a matter of degree. For instance, Harvey allowed guards to physically beat the inmates. He had a storage closet which he used to segregate certain inmates, those whom he considered disciplinary problems. These in mates were stripped naked, put in the closet, which was "the hole," and fed only bread and water. They stayed there indefinite periods of time.
Sheriff Postill uses a somewhat larger cell as his hole. Although people are not beaten, or put on bread and water, they are at times stripped and put in the hole as a disciplinary measure. Postill's hole does not have a bed, a mattress, nor running water. A hole in the floor serves as the "toilet". Unlike under Harvey, people in the hole are now permitted showers sometimes.

Marta: Although Postill's behavior may seem to differ from Harvey's in only minor ways, these differences are very significant. If you are a person sitting in jail, behind bars, it makes a real difference to you whether someone will come along and hit you on the head with a stick or not. And it does make a difference whether you have access to medical treatment or not. I'd rather have a person for Sheriff who doesn't beat people over the head, than someone who does.

Molly: One danger in having a Sheriff who superficially espouses rehabilitation for the vote value attached to it, is that the climate of this county might swerve further to the right, more toward law 'n order: lock 'em up and throw away the key. The elected official who opts for the external guise of rehabilitation for its corresponding vote value than feeling a real committment to the community corrections philosophy may suddenly start whistling the more popular tune. and then inmate rehabilitation is thrown to the wayside. This is an important question not only with the Sheriff, but with all elected officials.

Marta: I think the big step we have to take with community corrections is to get the programs out of the realm of the Sheriffs power; get them out of his Department. As an elected official, his policies are dictated by the public mood. The law says the Sheriffs job is to run the Jail. If the Sheriff were truly committed to community corrections, and the deinstitutionalization that implies, actually he'd be committed to substantially altering the character of his job.

SUN: How do you feel about the outcome of the recent County Commissioners hearings about your firings?

Molly and Marta: The outcome was definitely a victory for us. By our being reinstated, Postill was admitting that he was wrong in firing us. That was what we were protesting.
It is very significant that two women and a black man could publically force the Sheriff into retracting the firings he had done in a rage. His authority was successfully challenged.
We naturally feel a very deep regret over what has happened, and will continue to happen in the Program. We invested a tremendous amount of ourselves in the Program, we started it, and we are sorry that it was prevented from succeeding by a number of factors, only one of which was Postill. We believe the concept of the IRP is sound, and given the proper circumstances could work well.