The FBI's Plan To Attack The Black Panther Party 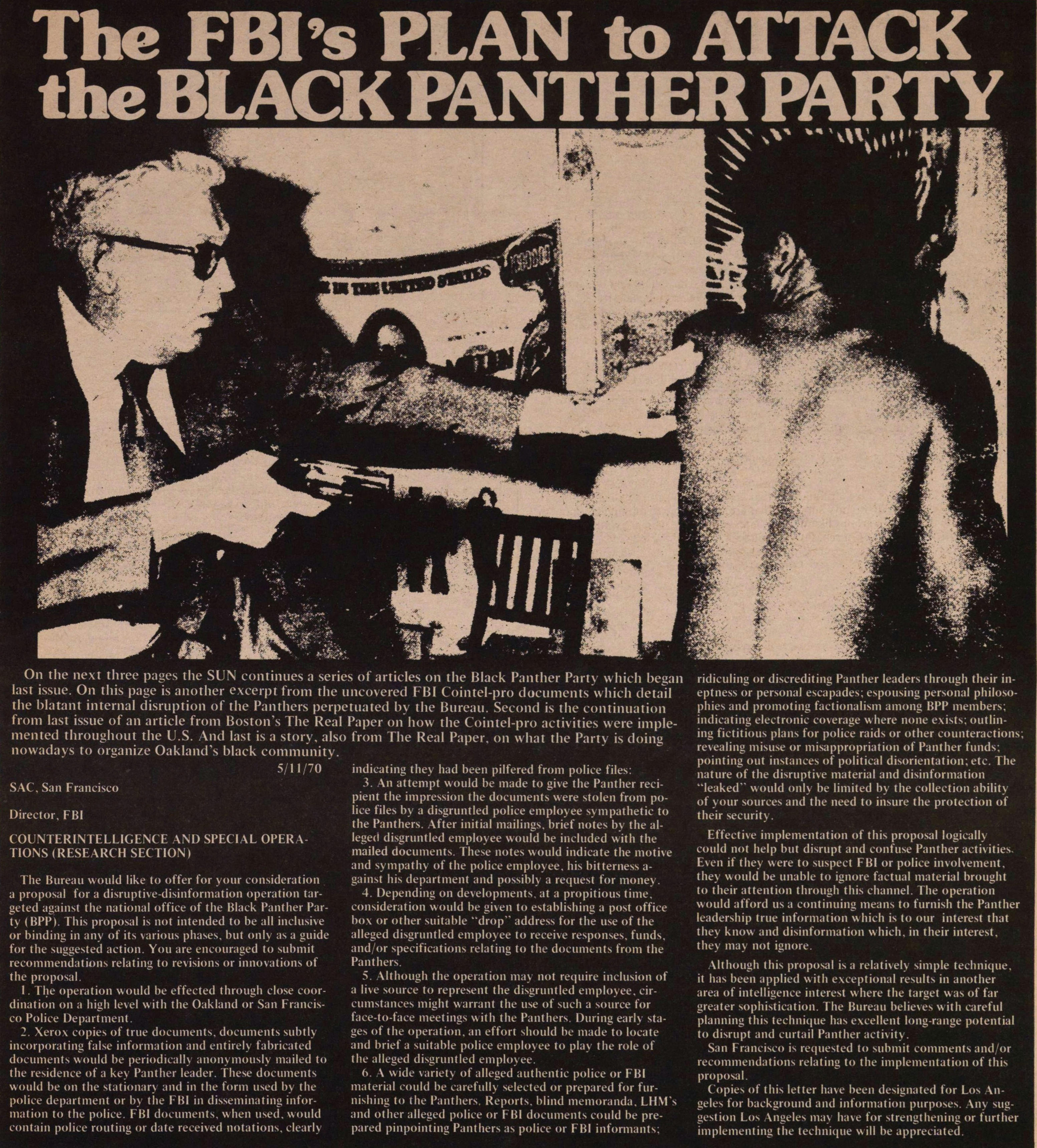 The FBI’s PLAN to ATTACK the BLACK PANTHER PARTY

On the next three pages the SUN continues a series of articles on the Black Panther Party which began last issue. On this page is another excerpt from the uncovered FBI Cointel-pro activities were implemented throughout the U.S. And last is a story, also from the Real Paper, on what the Party is doing nowadays to organize Oakland’s black community.
5/11/70

The Bureau would like to offer for your consideration a proposal for a disruptive-disinformation operation targeted against the national office of the Black Panther Party (BPP). This proposal is not intended to be all inclusive or binding in any of its various phases, but only as a guide for the suggested action. You are encouraged to submit recommendations relating to revisions or innovations of the proposal.

1. The operation would be effected through close coordination on a high level with the Oakland or San Francisco Police Department.

2. Xerox copies of true documents, documents subtly incorporating false information and entirely fabricated documents would be periodically anonymously mailed to the residence of a key Panther leader. These documents would be on the stationary and in the form used by the police department or by the FBI in disseminating information to the police. FBI documents, when used, would contain police routing or date received notations, clearly indicating they had been pilfered from police files:

3. An attempt would be made to give the Panther recipient the impression the documents were stolen from police files by a disgruntled police employee sympathetic to the Panthers. After initial mailings, brief notes by the alleged disgruntled employee would be included with the mailed documents. These notes would indicate the motive and sympathy of the police employee, his bitterness against his department and possibly a request for money.

4. Depending on developments, at a propitious time, consideration would be given to establishing a post office box or other suitable “drop” address for the use of the alleged disgruntled employee to receive responses, funds, and/or specifications relating to the documents from the Panthers.

5. Although the operation may not require inclusion of a live source to represent the disgruntled employee, circumstances might warrant the use of such a source for face-to-face meetings with the Panthers. During early stages of the operation, an effort should be made to locate and brief a suitable police employee to play the role of the alleged disgruntled employee.

6. A wide variety of alleged authentic police or FBI material could be carefully selected or prepared for furnishing to the Panthers. Reports, blind memoranda, LHM’s and other alleged police or FBI documents could be prepared pinpointing Panthers as police or FBI informants; ridiculing or discrediting Panther leaders through their ineptness or personal escapades; espousing personal philosophies and promoting factionalism among BPP members; indicating electronic coverage where none exists; outlining fictitious plans for police raids or other counteractions; revealing misuse or misappropriation of Panther funds; pointing out instances of political disorientation; etc. The nature of the disruptive material and disinformation “leaked” would only be limited by the collection ability of your sources and the need to insure the protection of their security.

Effective implementation of this proposal logically could not help but disrupt and confuse Panther activities. Even if they were to suspect FBI or police involvement, they would be unable to ignore factual material brought to their attention through this channel. The operation would afford us a continuing means to furnish the Panther leadership true information which is to our interest that they know and disinformation which, in their interest, they may not ignore.

Although this proposal is a relatively simple technique, it has been applied with exceptional results in another area of intelligence interest where the target was of far greater sophistication. The bureau believes with careful planning this technique has excellent long-range potential to disrupt and curtail Panther activity.

San Francisco is requested to submit comments and/or recommendations relating to the implementation of this proposal. Copies of this letter have been designated for Los Angeles for background and information purposes. Any suggestion Los Angeles may have for strengthening or furth implementing the technique will be appreciated.