...how The Panthers Recovered 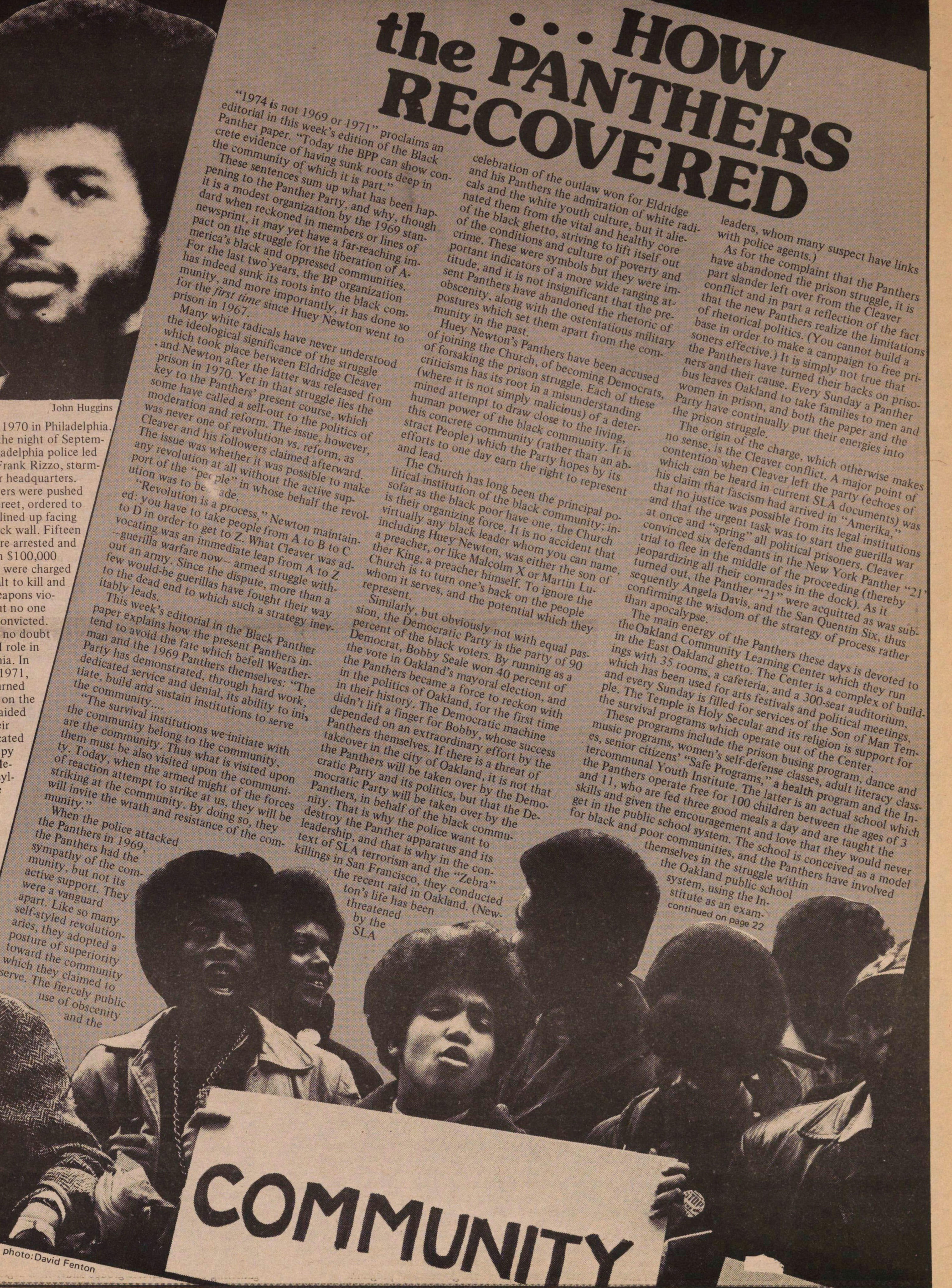 ... HOW the Panthers Recovered

“1974 is not 1969 or 1971” proclaim an editorial in this week’s edition of the Black Panther paper. “Today’s the BPP can show concrete evidence of having sunk roots deep in the community of which it is part.”

These sentences sum up what has been happening to the Panther Party, and why, though it is a modest organization by the 1969 standard when reckoned in members or lines of newsprint, it may yet have a far-reaching impact on the struggle for the liberation of America’s black and oppressed communities. For the last two years, the BP organization has indeed sunk its roots into the black community, and more importantly, it has done so for the first time since Huey Newton went to prison in 1967.

Many white radicals have never understood the ideological significance of the struggle which took place between Eldridge Cleaver and Newton after the latter was released from prison in 1970. Yet in that struggle lies the key to the Panthers’ present course, which some have called a sell-out to the politics of moderation and reform. The issue, however, was never on of revolution vs. reform, as Cleaver and his followers claimed afterward. The issue was whether it was possible to make any revolution at all without the active support of the “people” in whose behalf the revolution was to be made.

“Revolution is a process,” Newton maintained: you have to take people from A to B to C to D in order to get to Z. What Cleaver was advocating was an immediate leap from A to Z – guerilla warfare now – armed struggle without an army. Since the dispute, more than a few would-be guerillas have fought their way to the dead end to which such a strategy inevitably leads.

This week’s editorial in the Black Panther paper explains how the present Panthers intend to avoid the fate which befell Weatherman and the 1969 Panthers themselves: “The Party has demonstrated, through hard work, dedicated service and denial, its ability to initiate, build and sustain institutions to serve the community….

When the police attacked the Panthers in 1969, the Panthers had the sympathy of the community, but not its active support. They were a vanguard apart. Like so many self-styled revolutionaries, they adopted a posture of superiority toward the community which they claimed to serve. The fiercely public use of obscenity and the celebration of the outlaw won for Eldridge and his Panthers the admiration of white radicals and the white youth culture, but it alienated them from the vital and healthy core of the black ghetto, striving to lift itself out of the conditions and culture of poverty and crime. These were symbols but they were important indicators of a more wide ranging attitude, and it is not insignificant that the present Panthers have abandoned the rhetoric of obscenity, along with the ostentatious military postures which set them apart from the community in the past.

Huey Newton’s Panthers have been accused of joining the Church, of becoming Democrats, of forsaking the prison struggle. Each of these criticisms has its root in a misunderstanding (where it is not simply malicious) of a determined attempt to draw close to the living, human power of the black community. It is this concrete community (rather than an abstract People) which the Party hopes by its efforts to one day earn the right to represent and lead.

The Church has long been the principal political institution of the black community; insofar as the black poor have one, the Church is their organizing force. It is no accident that virtually any black leader whom you can name, including Huey Newton, was either the son of a preacher, or like Malcolm X or Martin Luther King, a preacher himself. To ignore the Church is to turn one’s back on the people whom it serves, and the potential which they represent.

Similarly, but obviously not with equal passion, the Democratic Party is the party of 90 percent of the black voters. By running as a democrat, Bobby Seale won 40 percent of the vote in Oakland’s mayoral election, and the Panthers became a force to reckon with in the politics of Oakland, for the first time in their history. The Democratic machine didn’t lift a finger for Bobby, whose success depended on an extraordinary effort by the Panthers themselves. If there is a threat of takeover in the city of Oakland, it is not that the Panthers will be taken over by the Democratic Party and its politics, but that the Democratic Party will be taken over by the Panthers, in behalf of the black community. That is why the police want to destroy the Panther apparatus and its leadership, and that is why in the context of SLA terrorism and the “Zebra” killings in San Francisco, they conducted the recent raid in Oakland. (Newton’s life has been threatened by the SLA leaders, whom many suspect have links with police agents.)

As for the complaint that the Panthers have abandoned the prison struggle, it is part slander left over from the Cleaver conflict and in part a reflection of the fact that the new Panthers realize the limitations of rhetorical politics. (You cannot build a base in order to make a campaign to free prisoners effective.) It is simply not true that the Panthers have turned their backs on the prisoners and their cause. Every Sunday a Panther bus leaves Oakland to take families to men and women in prison, and both the paper and the Party have continually put their energies into the prison struggle.

The origin of the charge, which otherwise makes no sense, is the Cleaver conflict. A major point of contention when Cleaver left the party (echoes of which can be heard in current SLA documents) was his claim that fascism had arrive in “Amerika,” that no justice was possible from its legal institutions and that the urgent task was to start the guerilla war at once and “spring” all political prisoners. Cleaver convinced six defendants in the Ney York Panther “21” trial to flee in the middle of the proceeding (thereby jeopardizing all their comrades in the dock). As it turned out, the Panther “21” were acquitted as was subsequently Angela Davis, and the San Quentin Six, thus confirming the wisdom of the strategy of process rather than apocalypse.

The main energy of the Panthers these days is devoted to the Oakland Community Learning Center which they run in the East Oakland ghetto. The Center is a complex of buildings with 35 rooms, a cafeteria, and a 300-seat auditorium, which has been used for arts festivals and political meetings, and every Sunday is filled for services of the Son of Man Temple. The Temple is Holy Secular and its religion is support for the survival programs which operate out of the Center.

These programs include the prison busing program, dance and music programs, women’s self-defense classes, adult literacy classes, senior citizens’ “Safe Programs,” a health program and the Intercommunal Youth Institute. The latter is an actual school which the Panthers operate free for the 100 children between the ages of 3 and 11, who are fed three good meals a day and are taught the skills and given the encouragement and love that they would never get in the public school system. The school is conceived as a model for black and poor communities, and the Panthers have involved themselves in the struggle within the Oakland public school system, using the Institute as an example of what could and should be done. “We are feeding hungry children,” says the Panther paper, and it is not mere rhetoric. “We are clothing ill-clothed bodies. We are searching out the ill and diseased and administering to them. We are caring for and protecting the elderly. We are educating the young to serve. We are bringing loved ones to the incarcerated. We are exposing the horrors that are America’s prisons and voicing the demands of our imprisoned sisters and brothers. In each of these efforts, among those we serve, we expose the failure of the established institutions of this land to provide these most fundamental of needs. We are daily raising consciousness to higher and higher levels of understanding that only by taking the institutions of this land into their own hands can the people secure their future and the future of their children.”

The Panthers are far from being a perfect organization. They are a long way even from their immediate goal of speaking for the black community of Oakland, and they are still too dependent on the wisdom and survival of one admittedly extraordinary man. But if these are not the deeds and words of dedicated revolutionaries, then I fail to understand what revolution is.