Records - The Art Ensemble of Chicago 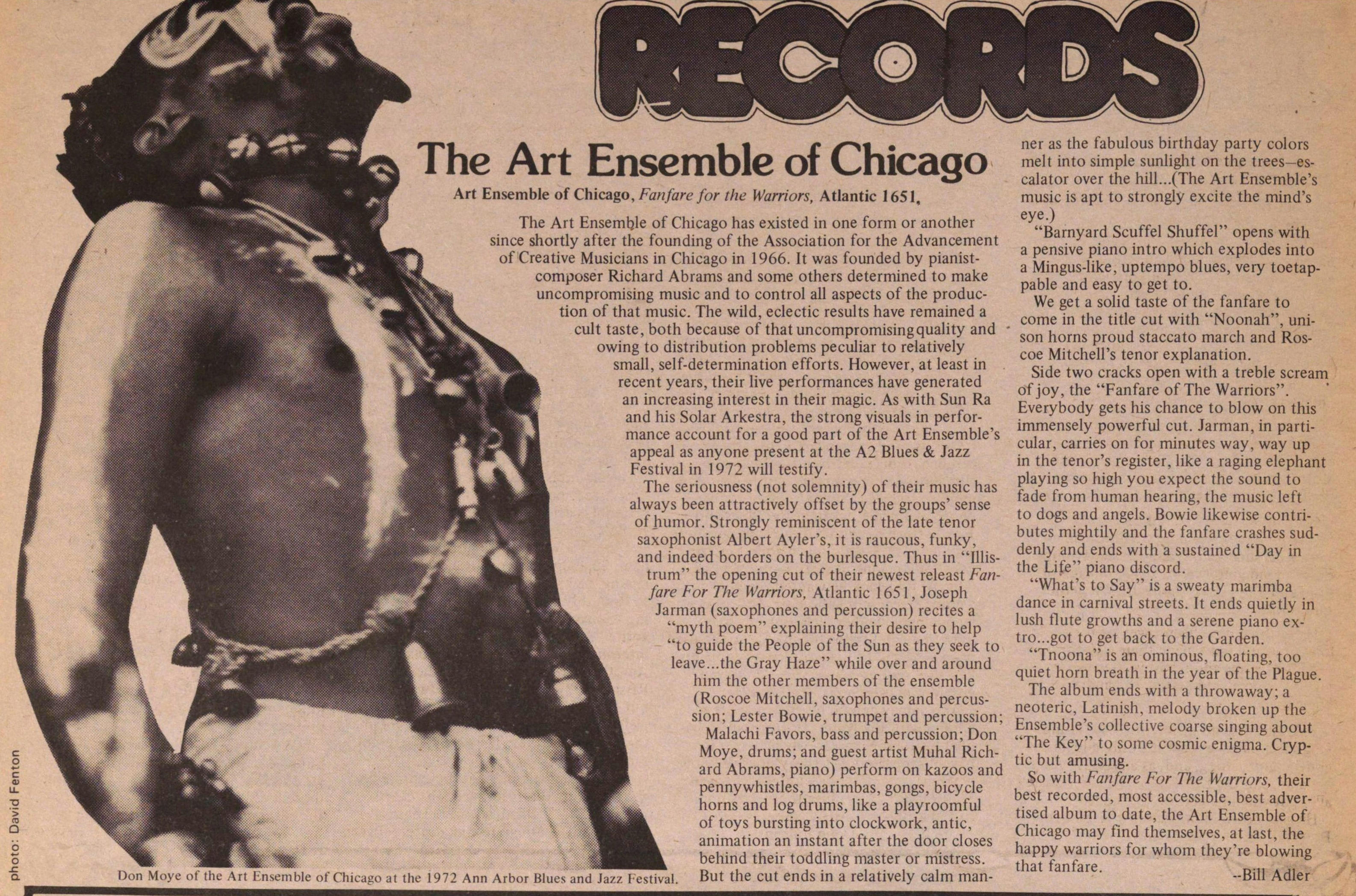 The Art Ensemble of Chicago

Art Ensemble of Chicago, Fanfare for the Warriors, Atlantic 1651.

The Art Ensemble of Chicago has existed in one form or another since shortly after the founding of the Association for the Advancement of Creative Musicians in Chicago in 1966. It was founded by pianist/composer Richard Abrams and some others determined to make uncompromising music and to control all aspects of the production of that music. The wild, eclectic results have remained a cult taste, both because of that uncompromising quality and owing to distribution problems peculiar to relatively small, self-determination efforts. However, at least in recent years, their live performances have generated an increasing interest in their magic. As with Sun Ra and his Solar Arkestra, the strong visuals in performance account for a good part of the Art Ensemble’s appeal as anyone present at the A2 Blues & Jazz Festival in 1972 will testify.

The seriousness (not solemnity) of their music has always been attractively offset by the groups’ sense of humor. Strongly reminiscent of the late tenor saxophonist Albert Ayler’s, it is raucous, funky, and indeed borders on the burlesque. Thus in “Illistrum” the opening cut of their newest release Fanfare For The Warriors, Atlantic 1651, Joseph Jarman (saxophones and percussion) recites a “myth poem” explaining their desire to help “to guide the People of the Sun as they seek to leave the Gray Haze” while over and around him the other members of the ensemble (Roscoe Mitchell, saxophones and percussion; Lester Bowie, trumpet and percussion; Malachi Favors, bass and percussion; Don Moye, drums; and guest artist Muhal Richard Abrams, piano) perform on kazoos and pennywhistles, marimbas, gongs, bicycle horns and log drums, like a playroomful of toys bursting into clockwork, antic, animation an instant after the door closes behind their toddling master or mistress. But the cut ends in a relatively calm manner as the fabulous birthday party colors melt into simple sunlight on the trees- escalator over the hill... (The Art Ensemble’s music is apt to strongly excite the mind’s eye.)

“Barnyard Scuffel Shuffel” opens with a pensive piano intro which explodes into a Mingus-like, uptempo blues, very toetappable and easy to get to.

We get a solid taste of the fanfare to come in the title cut with “Noonah”, unison horns proud staccato march and Roscoe Mitchell’s tenor explanation.

Side two cracks open with a treble scream of joy, the “Fanfare of The Warriors”. Everybody gets his chance to blow on this immensely powerful cut. Jarman, in particular, carries on for minutes way, way up in the tenor’s register, like a raging elephant playing so high you expect the sound to fade from human hearing, the music left to dogs and angels. Bowie likewise contributes mightily and the fanfare crashes suddenly and ends with a sustained “Day in the Life” piano discord.

“What’s to Say” is a sweaty marimba dance in carnival streets. It ends quietly in lush flute growths and a serene piano extro... got to get back to the Garden.

“Tnoona” is an ominous, floating, too quiet horn breath in the year of the Plague.

The album ends with a throwaway; a neoteric, Latinish, melody broken up the Ensemble’s collective coarse singing about “The Key” to some cosmic enigma. Cryptic but amusing.

So with Fanfare For The Warriors, their best recorded, most accessible, best advertised album to date, the Art Ensemble of Chicago may find themselves, at last, the happy warriors for whom they’re blowing that fanfare.