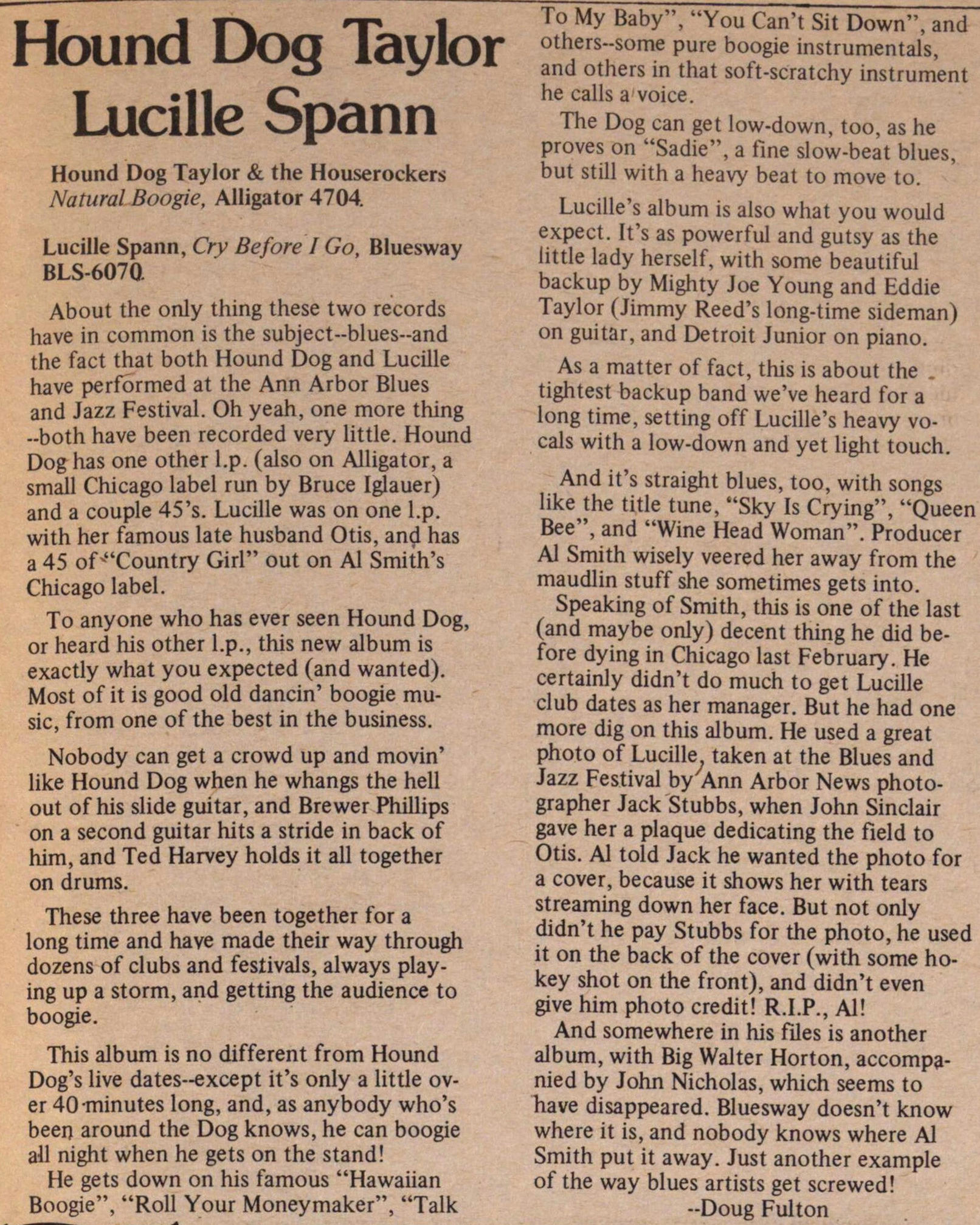 About the only thing these two records have in common is the subject--blues--and the fact that both Hound Dog and Lucille have performed at the Ann Arbor Blues and Jazz Festival. Oh yeah, one more thing -both have been recorded very little. Hound Dog has one other l.p. (also on Alligator, a small Chicago label run by Bruce Iglauer) and a couple 45's. Lucille was on one l.p. with her famous late husband Otis, and has a 45 of -"Country Girl" out on Al Smith's Chicago label.

To anyone who has ever seen Hound Dog, or heard his other l.p., this new album is exactly what you expected (and wanted). Most of it is good old dancin' boogie music, from one of the best in the business.

Nobody can get a crowd up and movin' like Hound Dog when he whangs the hell out of his slide guitar, and Brewer Phillips on a second guitar hits a stride in back of him, and Ted Harvey holds it all together on drums.

These three have been together for a long time and have made their way through dozens of clubs and festivals, always playing up a storm, and getting the audience to boogie.

This album is no different from Hound Dog's live dates-except it's only a little over 40 minutes long, and, as anybody who's been around the Dog knows, he can boogie all night when he gets on the stand!

He gets down on his famous "Hawaiian Boogie", "Roll Your Moneymaker", "Talk To My Baby", "You Can't Sit Down", and others-some pure boogie instrumentals, and others in that soft-scratchy instrument he calls a voice. The Dog can get low-down, too, as he proves on "Sadie", a fine slow-beat blues, but still with a heavy beat to move to.

Lucille's album is also what you would expect. It's as powerful and gutsy as the little lady herself, with some beautiful backup by Mighty Joe Young and Eddie Taylor (Jimmy Reed's long-time sideman) on guitar, and Detroit Junior on piano.

As a matter of fact, this is about the tightest backup band we've heard for a long time, setting off Lucille's heavy vocals with a low-down and yet light touch.

And it's straight blues, too, with songs like the title tune, "Sky Is Crying", "Queen Bee", and "Wine Head Woman". Producer Al Smith wisely veered her away from the maudlin stuff she sometimes gets into.

Speaking of Smith, this is one of the last (and maybe only) decent thing he did before dying in Chicago last February. He certainly didn't do much to get Lucille club dates as her manager. But he had one more dig on this album. He used a great photo of Lucille taken at the Blues and Jazz Festival by Ann Arbor News photographer Jack Stubbs, when John Sinclair gave her a plaque dedicating the field to Otis. Al told Jack he wanted the photo for a cover, because it shows her with tears streaming down her face. But not only didn't he pay Stubbs for the photo, he used it on the back of the cover (with some hokey shot on the front), and didn't even give him photo credit! R.I.P., Al!

And somewhere in his files is another album, with Big Walter Horton, accompanied by John Nicholas, which seems to have disappeared. Bluesway doesn't know where it is, and nobody knows where Al Smith put it away. Just another example of the way blues artists get screwed!