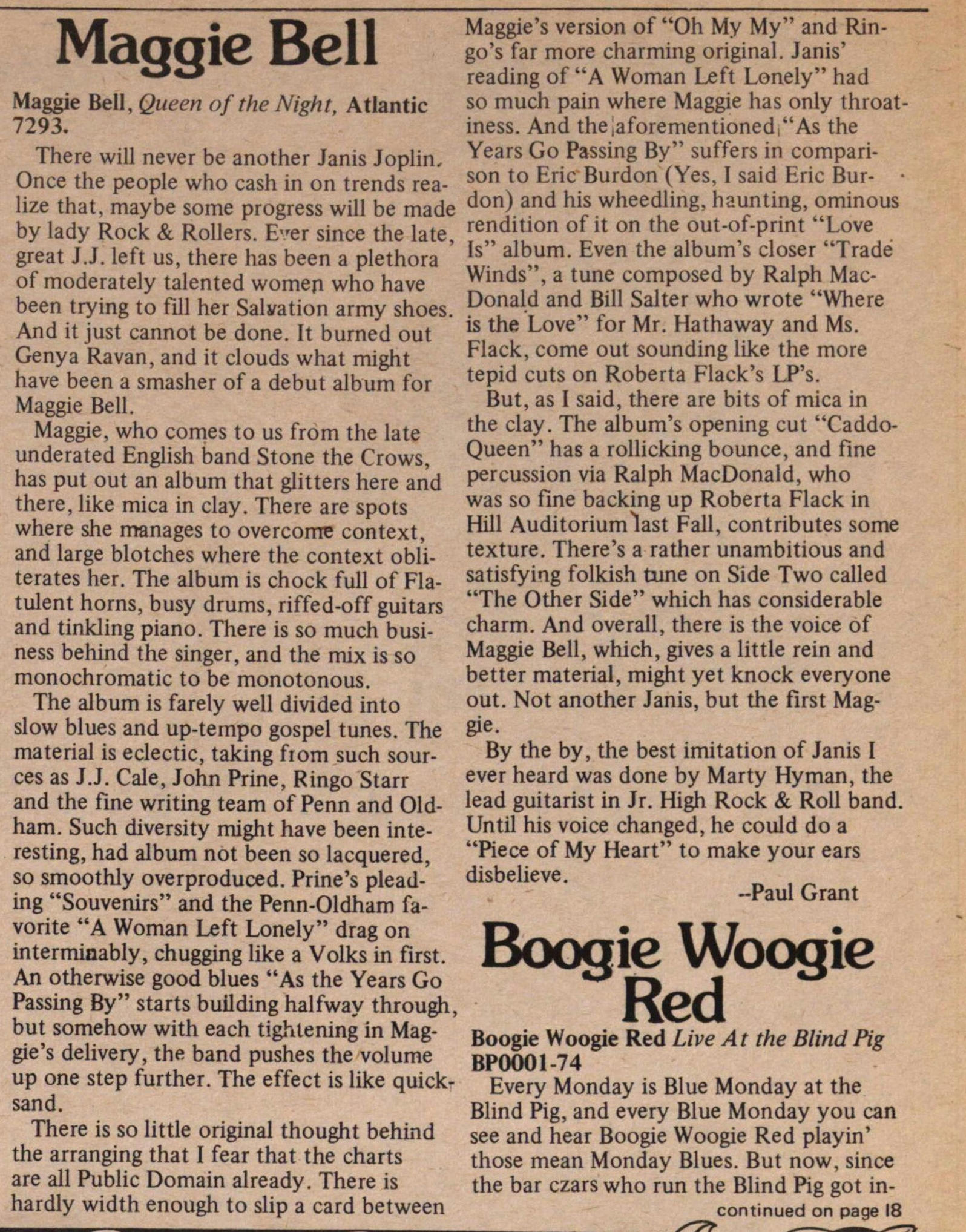 There will never be another Janis Joplin, Once the people who cash in on trends realize that, maybe some progress will be made by lady Rock & Rollers. Ever since the late, great J.J. left us, there has been a plethora of moderately talented women who have been trying to fill her Salvation army shoes. And it just cannot be done. It burned out Genya Ravan, and it clouds what might have been a smasher of a debut album for Maggie Bell.

Maggie, who comes to us from the late underrated English band Stone the Crows, has put out an album that glitters here and there, like mica in clay. There are spots where she manages to overcome context, and large blotches where the context obliterates her. The album is chock full of Flatulent horns, busy drums, riffed-off guitars and tinkling piano. There is so much business behind the singer, and the mix is so monochromatic to be monotonous.

The album is farely well divided into slow blues and up-tempo gospel tunes. The material is eclectic, taking from such sources as J.J. Cale, John Prine, Ringo Starr and the fine writing team of Penn and Oldham. Such diversity might have been interesting, had album not been so lacquered, so smoothly overproduced. Prine's pleading "Souvenirs" and the Penn-Oldham favorite "A Woman Left Lonely" drag on interminably, chugging like a Volks in first. An otherwise good blues "As the Years Go Passing By" starts building halfway through, but somehow with each tightening in Maggie's delivery, the band pushes the volume up one step further. The effect is like quicksand.

There is so little original thought behind the arranging that I fear that the charts are all Public Domain already. There is hardly width enough to slip a card between Maggie s version of "Oh My My" and Ringo's far more charming original. Janis' reading of "A Woman Left Lonely" had so much pain where Maggie has only throatiness. And the aforementioned "As the Years Go Passing By" suffers in comparison to Eric Burdon (Yes, I said Eric Burdon) and his wheedling, haunting, ominous rendition of it on the out-of-print "Love Is" album. Even the album's closer "Trade Winds", a tune composed by Ralph MacDonald and Bill Salter who wrote "Where is the Love" for Mr. Hathaway and Ms. Flack, come out sounding like the more tepid cuts on Roberta Flack's LP's.

But, as I said, there are bits of mica in the clay. The album's opening cut "Caddo-Queen" has a rollicking bounce, and fine percussion via Ralph MacDonald, who was so fine backing up Roberta Flack in Hill Auditorium last Fall, contributes some texture. There's a rather unambitious and satisfying folkish tune on Side Two called "The Other Side" which has considerable charm. And overall, there is the voice of Maggie Bell, which, gives a little rein and better material, might yet knock everyone out. Not another Janis, but the first Maggie.

By the by, the best imitation of Janis I ever heard was done by Marty Hyman, the lead guitarist in Jr. High Rock & Roll band. Until his voice changed, he could do a "Piece of My Heart" to make your ears disbelieve.