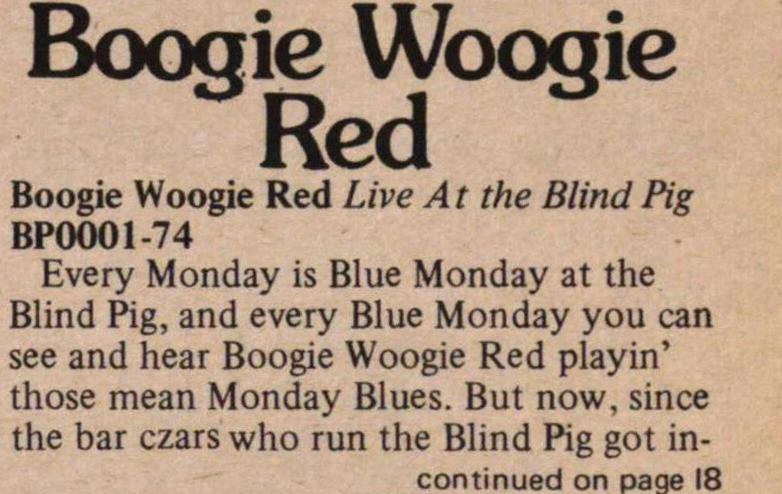 Every Monday is Blue Monday at the Blind Pig, and every Blue Monday you can see and hear Boogie Woogie Red playin' those mean Monday Blues. But now, since the bar czars who run the Blind Pig got in

volved in the record business, you don't have to wait 'til Monday to hear Red. All you have to do is play this album and Red, his music, and even the Pig itself comes to life right before your ears.

Red has been playing piano for over 30 years, in Europe as well as here in the States, but for all those miles and all those years Red never cut his own record. Oh, Red's been on LP's before, mostly in Europe, but this album is his album, and we say it's about time!

Red was born in Louisiana but grew up in Detroit. It was Black Bottom Blues that Red teethed on. When Red was in his early twenties he hooked up with John Lee Hooker, staying with John Lee's band for the next 13 years. It was during this time that Red had his own club, a real Blind Pig, disguised as a garage. At Red's pig you could hear John Lee Hooker, Elmore James, Sonny Boy Williamsom and other blues giants of the murder city who stopped by to jam with Red.

This album was recorded live at the Pig, and all the funky charm of the Pig and the musicians is captured on the grooves. The mixing is not as good as it could be, so the vocals are a little weak at times, but generally it's a primo recording. Some of the highlights of side one are; "The Reefer Song", which is one of Red's (and ours) favorite Fats Waller tunes. On "Reefer" you get a hint of what is to come. Red departs from the regular blues changes and gets into some old time swing jazz licks.

"When I Was Young" is a Red original. His rippling piano on this slow blues tune tells the story of Red's first involvement with women. You might think he's sorry about lost youth, but he's really just remembering and relishing the joy of having what it takes. Dig Red's vocal working with his piano.

"Sisterly Love" is another Red original. You can hear Red say, "Ain't no sister that do what she done to me." It's a slow 'n easy blues tune.

"Mean 0l' Frisco" is a fast train shuffle written by Arthur Crudup. This rendition of the tune starts out as a steady rollin' freight and, thanks to the powerful drumming of Fran Christina, ends up a super press takin' his baby away.

"After Hours" has been a blues Standard of 30 or so years. Written in 1937 by Avery Parrish and performed by him with the Erskine Hawkins Band, it has become one of Red's masterpieces. He really shows off his technique as he tickles the keys on the high octaves. It's a real thrill to hear him trill.

"Red's Boogie" is just that- Red's Boogie. When you listen to this tune you'll know where he got his name. Red does this tune unaccompanied, and he Iets it all hang out.

Backin' up Red on the album are some of the finest young blues musicians in town; John Nicholas on guitar and vocals, ("Got To Find My Baby" and "You Got a Spell On Me" are Nicholas originals), Larry Peduzzi on electric bass, and Fran Christina on drums. Bill Heid, an excellent young pianist, sits in for Red on one cut, "Got To Find My Baby".

Boogie Woogie Red: Live at the Blind Pig is the first album put out on the Blind Pig label. With a beginning like this, we can't wait to see what the next release will be.

Buy it, you're sure to love it.