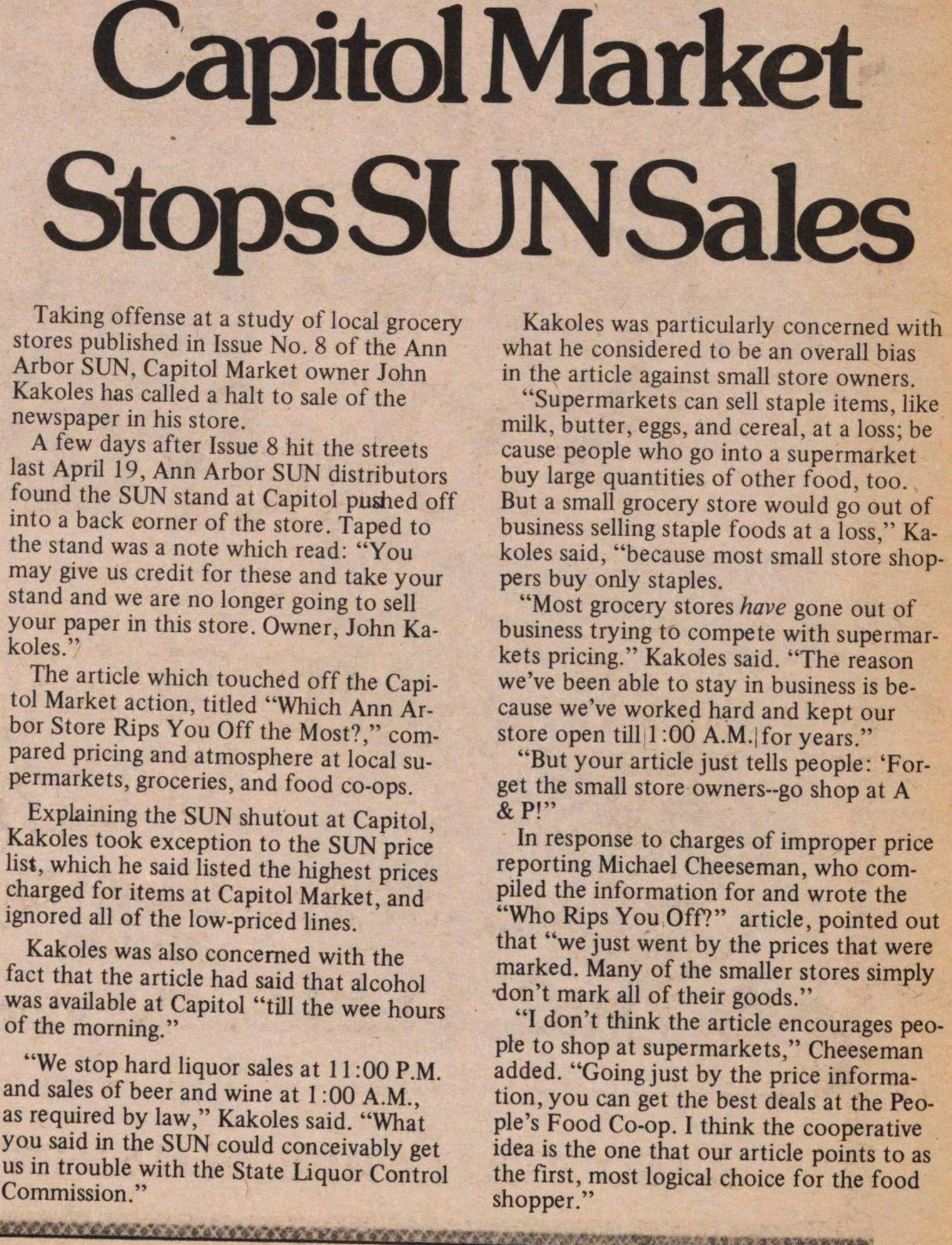 Taking offense at a study of local grocery stores published in Issue No. 8 of the Ann Arbor SUN, Capitol Market owner John Kakoles has called a halt to sale of the newspaper in his store.

A few days after Issue 8 hit the streets last April 19, Ann Arbor SUN distributors found the SUN stand at Capitol pushed off into a back corner of the store. Taped to the stand was a note which read: "You may give us credit for these and take your stand and we are no longer going to sell your paper in this store. Owner, John Kakoles."

The article which touched off the Capitol Market action, titled "Which Ann Arbor Store Rips You Off the Most?," compared pricing and atmosphere at local supermarkets, groceries, and food co-ops.

Explaining the SUN shutout at Capitol, Kakoles took exception to the SUN price list, which he said listed the highest prices charged for items at Capitol Market, and ignored all of the low-priced lines.

Kakoles was also concerned with the fact that the article had said that alcohol was available at Capitol "till the wee hours of the morning."

"We stop hard liquor sales at 11:00 P.M. and sales of beer and wine at 1:00 A.M., as required by law," Kakoles said. "What you said in the SUN could conceivably get us in trouble with the State Liquor Control Commission."

Kakoles was particularly concerned with what he considered to be an overall bias in the article against small store owners.

"Supermarkets can sell staple items, like milk, butter, eggs, and cereal, at a loss; be cause people who go into a supermarket buy large quantities of other food, too. But a small grocery store would go out of business selling staple foods at a loss," Kakoles said, "because most small store shoppers buy only staples.

"Most grocery stores have gone out of business trying to compete with supermarkets pricing." Kakoles said. "The reason we've been able to stay in business is because we've worked hard and kept our store open till 1:00 A.M. for years."

"But your article just tells people: 'Forget the small store owners--go shop at A & P!"

In response to charges of improper price reporting Michael Cheeseman, who compiled the information for and wrote the "Who Rips You Off?" article, pointed out that "we just went by the prices that were marked. Many of the smaller stores simply don't mark all of their goods."

"I don't think the article encourages people to shop at supermarkets," Cheeseman added. "Going just by the price information, you can get the best deals at the People's Food Co-op. I think the cooperative idea is the one that our article points to as the first, most logical choice for the food shopper."