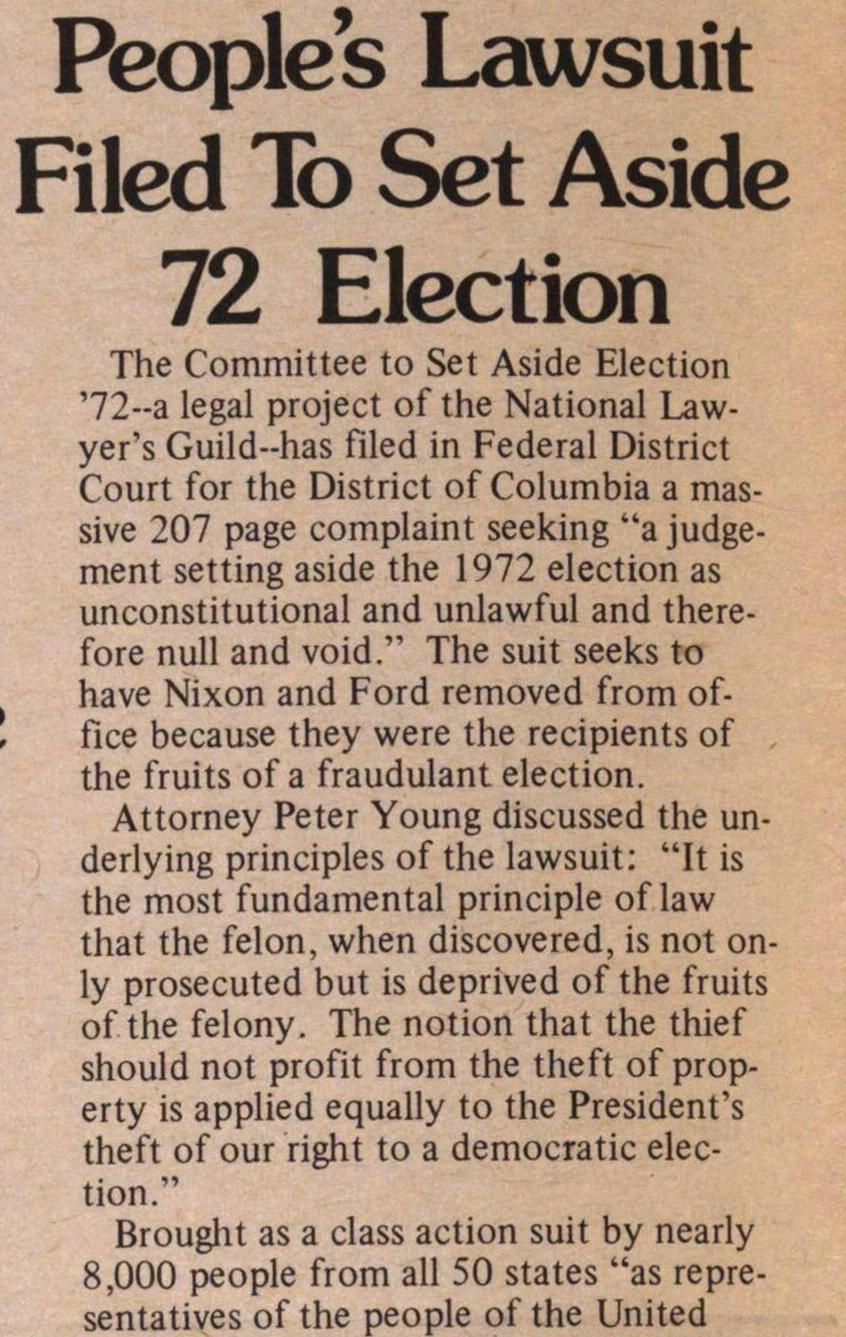 The Committee to Set Aside Election '72--a legal project of the National Lawyer's Guild--has filed in Federal District Court for the District of Columbia a massive 207 page complaint seeking "a judgement setting aside the 1972 election as unconstitutional and unlawful and therefore null and void." The suit seeks to have Nixon and Ford removed from office because they were the recipients of the fruits of a fraudulent election.

Attorney Peter Young discussed the underlying principles of the lawsuit: "It is the most fundamental principle of law that the felon, when discovered, is not only prosecuted but is deprived of the fruits of the felony. The notion that the thief should not profit from the theft of property is applied equally to the President's theft of our right to a democratic election."

Brought as a class action suit by nearly 8,000 people from all 50 states "as representatives of the people of the United States of America," it charges that "the defendants and their co-conspirators" committed "numerous criminal and otherwise unlawful acts" to gain the re-election of Richard Nixon and Spiro Agnew.

Named as defendants in the suit are people now or formerly in the federal government (including Nixon, Ford, Haldeman, Ehrlichman and others), members of the Committee to Re-Elect the President (Mitchell, Stans, etc), and representatives of big business and corrupt labor leaders that fought for and funded Nixon 's re-election effort (ITT, Gulf Oil, Associated Milk Producers, and Frank  Fitzsimmons, President of the Teamsters Union, and others).

The CSAE'72 suit, also known as the People's Lawsuit, basically details three ways in which Nixon and those working for his re-election conducted a fraudulent campaign. First was the misuse of government power and agencies to gain campaign contributions and support.

Secondly, the suit cites widespread efforts by Nixon forces to silence opposition. The specifics of this charge include such activities as the Watergate break-in, the Plumbers operations, the enemies list, and government surveillance of people opposed to the Nixon administration.

Finally, the suit cites the misuse of government power to keep the public misinformed. This involves such actions as false Pentagon press statements about the war in Southeast Asia (as the secret bombing of Cambodia and the bombing of civilian targets in Vietnam), attacks upon the news media to intimidate them, and the cover-up following the Watergate break-in.

According to a statement by the Committee to Set Aside Election '72, "The oil, food and other lobbies were the real winners in 1972." They further note that "In filing this lawsuit we aim at not only removing Nixon and Ford, but also at defending our democratic rights against the corporate forces which threaten the freedom of each of us."