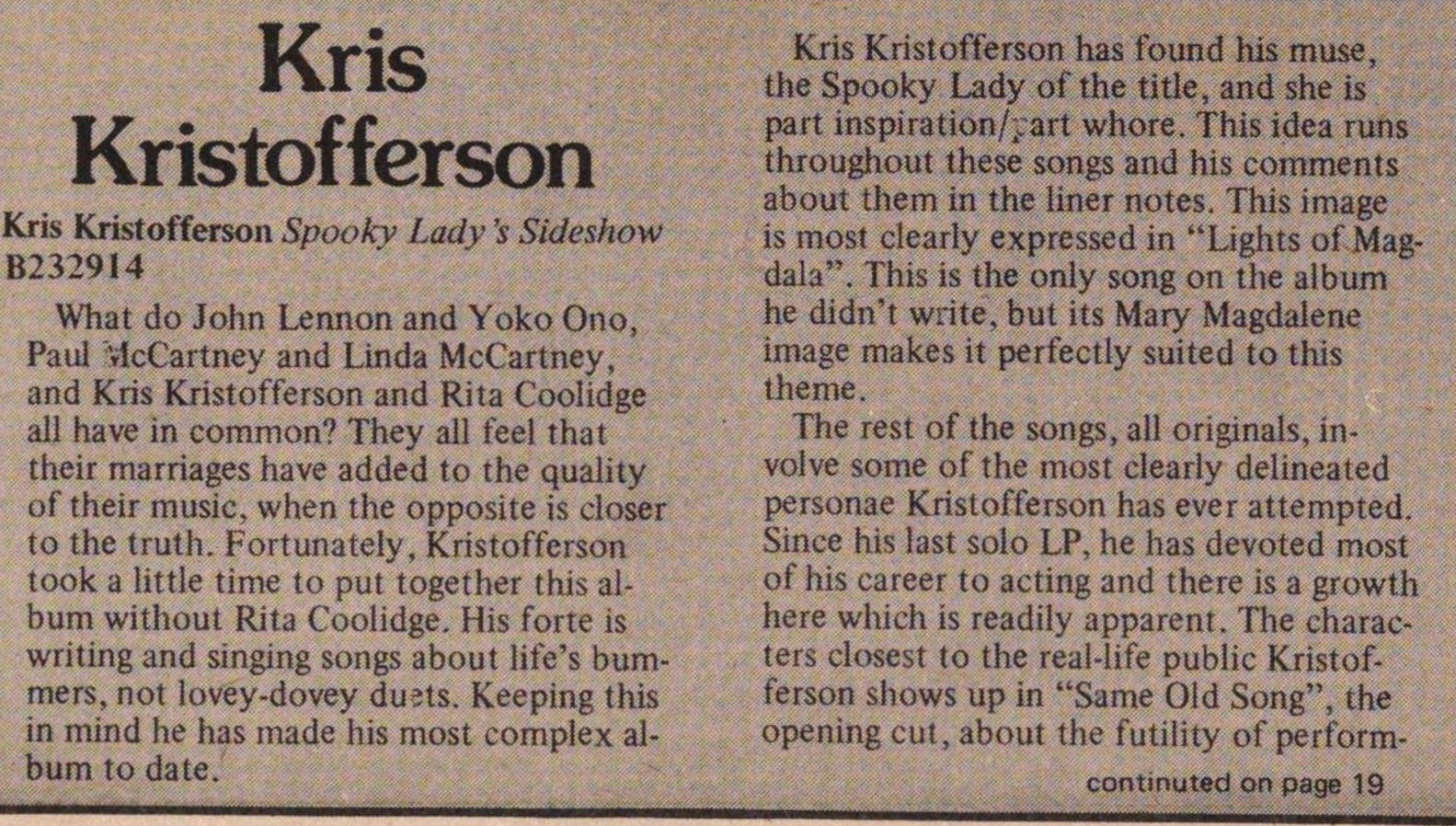 What do John Lennon and Yoko Ono, Paul McCartney and Linda McCartney, and Kris Kristofferson and Rita Coolidge all have in common? They all feel that their marriages have added to the quality of their music, when the opposite is closer to the truth. Fortunately, Kristofferson took a little time to put together this album with Rita Coolidge. His forte is writing and singing songs about life's bummers, not lovey-dovey duets. Keeping this in mind he has made his most complex album to date.

Kris Kristofferson has found his muse, the Spooky Lady of the title, and she is part inspiration/part whore. This idea runs throughout these songs and his comments about them in the liner notes. This image is most clearly expressed in "Lights of Magdala". This is the only song on the album he didn't write, but its Mary Magdalene image makes it perfectly suited to this theme.

The rest of the songs, all originals, involve some of the most clearly delineated personae Kristofferson has ever attempted. Since his last solo LP, he has devoted most of his career to acting and there is a growth here which is readily apparent. The characters closest to the real-life public Kristofferson shows up in "Same Old Song", the opening cut, about the futility of perform-

-ing, whether at the bottom of the top of one's popularity. I saw him in person back in 1972, when this song was written, and he clearly was not into performing at that time.

"Shandy (The Perfect Disguise)" is easily the most puzzling song on the album. It concerns a strange romance which ends with a frightening dream. It is the most disarming song in this collection, whatever it means.

"Star-Spangled Bummer" is referred to in Kris' liner notes as  "American History, Revolutionary war thru Nixon," In it Kris ends by summing up the current Washington mess:

Ring anvil for the dead

We dealt us by mistake

Our angel made of steel

Is big enough to break

Cause the rust is at his heel

And I swear I've seen him shaking

And we'll be here to bring the body home.

This song, along with "Rescue Mission" on side two, are the most skillfully acted performances on the record. "Rescue Mission" is a modern "Rime of the Ancient Mariner" and has some of the same power as that Coleridge poem.

"Stairway to the Bottom", the oldest song included (written in 1967) concerns a sad love affair; not one that ends sadly, one that continues sadly. It's about the futility which Kris describes so well as "climbing that stairway to the bottom."

Despite my dwelling on the heavy aspects of these songs, this album does have it's lighter moments, including the whimsically ironic tune "I May Smoke Too Much", which has such stellar poetry as "you bet your butt I'm gonna live before I die."

Also, for what it's worth, this isn't a country album, it's a Kristofferson album; it's another side of him, but is, nevertheless, a unified, ambitious endeavor. I am hopeful it will win him some new admirers, but I am positive it will bring some disenchanted former fans back into the fold.