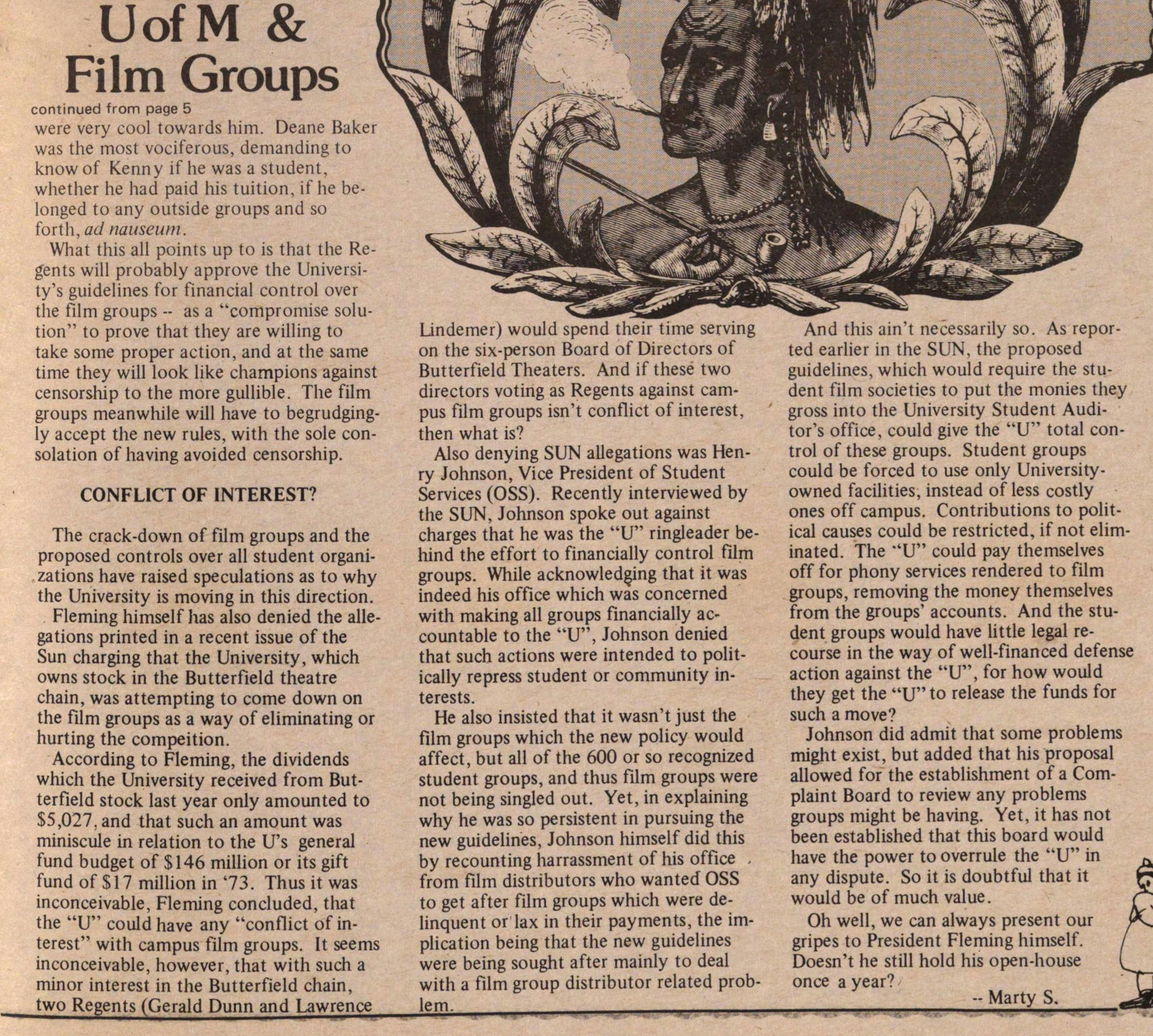 U of M & Film Groups continued from page 5

were very cool towards him. Deane Baker was the most vociferous, demanding to know of Kenny if he was a student, whether he had paid his tuition, if he belonged to any outside groups and so forth, ad nauseum.

What this all points up to is that the Regents will probably approve the University's guidelines for financial control over the film groups -- as a "compromise solution" to prove that they are willing to take some proper action, and at the same time they will look like champions against censorship to the more gullible. The film groups meanwhile will have to begrudgingly accept the new rules, with the sole consolation of having avoided censorship.

The crack-down of film groups and the proposed controls over all student organizations have raised speculations as to why the University is moving in this direction.

Fleming himself has also denied the allegations printed in a recent issue of the Sun charging that the University, which owns stock in the Butterfield theatre chain, was attempting to come down on the film groups as a way of eliminating or hurting the competition.

According to Fleming, the dividends which the University received from Butterfield stock last year only amounted to $5,027. and that such an amount was miniscule in relation to the U's general fund budget of $146 million or its gift fund of $17 million in '73. Thus it was inconceivable, Fleming concluded, that the "U" could have any "conflict of interest" with campus film groups. It seems inconceivable, however, that with such a minor interest in the Butterfield chain, two Regents (Gerald Dunn and Lawrence Lindemer) would spend their time serving on the six-person Board of Directors of Butterfield Theaters. And if these two directors voting as Regents against campus film groups isn't conflict of interest, then what is?

Also denying SUN allegations was Henry Johnson, Vice President of Student Services (OSS). Recently interviewed by the SUN, Johnson spoke out against charges that he was the "U" ringleader behind the effort to financially control film groups. While acknowledging that it was indeed his office which was concerned with making all groups financially accountable to the "U", Johnson denied that such actions were intended to politically repress student or community interests.

He also insisted that it wasn't just the film groups which the new policy would affect, but all of the 600 or so recognized student groups, and thus film groups were not being singled out. Yet, in explaining why he was so persistent in pursuing the new guidelines, Johnson himself did this by recounting harrassment of his office from film distributors who wanted OSS to get after film groups which were delinquent or lax in their payments, the implication being that the new guidelines were being sought after mainly to deal with a film group distributor related problem.

And this ain't necessarily so. As reported earlier in the SUN, the proposed guidelines, which would require the student film societies to put the monies they gross into the University Student Auditor's office, could give the "U" total control of these groups. Student groups could be forced to use only University owned facilities, instead of less costly ones off campus. Contributions to political causes could be restricted, if not eliminated. The "U" could pay themselves off for phony services rendered to film groups, removing the money themselves from the groups' accounts. And the student groups would have little legal recourse in the way of well-financed defense action against the "U", for how would they get the "U" to release the funds for such a move?

Johnson did admit that some problems might exist, but added that his proposal allowed for the establishment of a plaint Board to review any problems groups might be having. Yet, it has not been established that this board would have the power to overrule the "U" in any dispute. So it is doubtful that it would be of much value. Oh well, we can always present our gripes to President Fleming himself. Doesn't he still hold his open-house once a year?