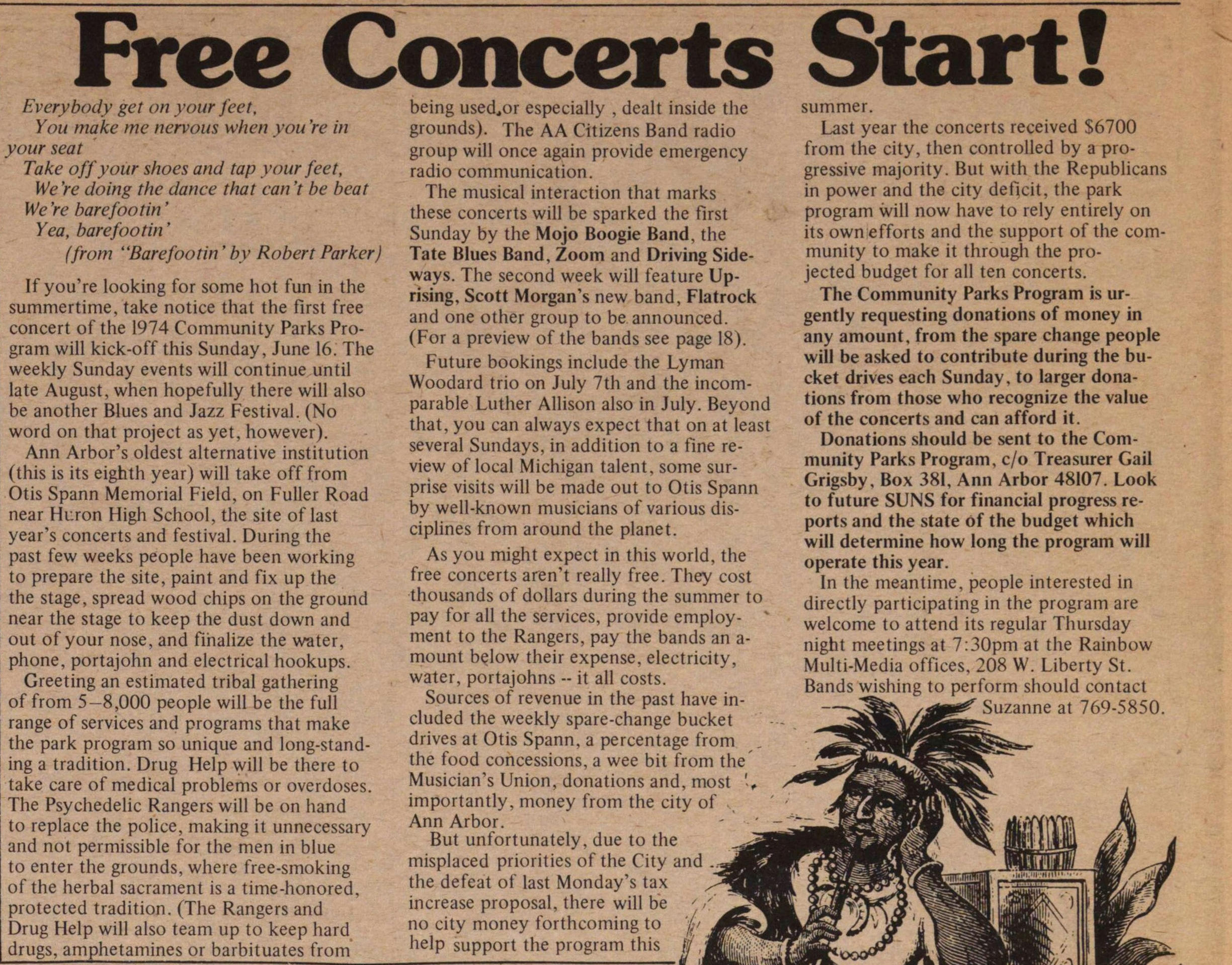 Everybody get on your feet,

You make me nervous when you're in your seat

Take off your shoes and tap your feet

We're doing the dance that can't be beat

(from "Barefootin'" by Robert Parker)

If you're looking for some hot fun in the summertime, take notice that the first free concert of the 1974 Community Parks Program will kick-off this Sunday, June 16. The weekly Sunday events will continue until late August, when hopefully there will also be another Blues and Jazz Festival. (No word on that project yet, however).

Ann Arbor's oldest alternative institution (this is it's eighth year) will take off from Otis Spann Memorial Field, on Fuller Road near Huron High School, the site of last year's concerts and festival. During the past few weeks people have been working to prepare the site, paint and fix up the stage, spread wood chips on the ground near the stage to keep the dust down and out of your nose, and finalize the water, phone, porta-john and electrical hookups.

Greeting an estimated tribal gathering from 5-8,000 people will be the full range of services and programs that make the park program so unique and long-standing a tradition. Drug Help will be there to take care of medical problems or overdoses. The Psychedelic Rangers will be on hand to replace the police, making it unnecessary and not permissible for the men in blue to enter the grounds, where free-smoking of the herbal sacrament is a time-honored, protected tradition. (The Rangers and Drug Help will also team up to keep hard drugs, amphetamines or barbituates from being used, or especially, dealt inside the grounds). The AA Citizens Band radio group will once again provide emergency radio communication.

The musical interaction that marks these concerts will be sparked the first Sunday by the Mojo Boogie Band, the Tate Blues Band, Zoom, and Driving Sideways. The second week will feature Uprising, Scott Morgan's new band, Flatrock and one other group to be announced. (For a preview of the bands see page 18).

Future bookings include the Lyman Woodard trio on July 7th and the incomparable Luther Allision also in July. Beyond that, you can always expect that on at least several Sundays, in addition to a fine review of local Michigan talent, some surprise visits will be made out to Otis Spann by well-known musicians of various disciplines from around the planet.

As you might expect in this world, the free concerts aren't really free. They cost thousands of dollars during the summer to pay for all the services, provide employment to the Rangers, pay the bands an amount below their expense, electricity, water, porta-johns -- it all costs.

Sources of revenue in the past have included the weekly spare-change bucket drives at Otis Spann, a percentage from the food concessions, a wee bit from the Musician's Union, donations and, most importantly, money from the city of Ann Arbor.

But unfortunately, due to the misplaced priorities of the City and the defeat of last Monday's tax increase proposal, there will be no city money forthcoming to help support the program this summer.

Last Year the concerts received $6700 from the city, then controlled by a progressive majority. But with the Republicans in power and the city deficit, the park program will now have to rely entirely on its own efforts and the support of the community to make it through the projected budget for all ten concerts.

The Community Parks Program is urgently requesting donations of money in any amount, from the spare change people will be asked to contribute during the bucket drives each Sunday, to larger donations from those who recognize the value of the concerts and can afford it.

Donations should be sent to the Community Parks Program, c/o Treasurer Gail Grigsby, Box 381, Ann Arbor 48107. Look to future SUNS for financial progress reports and the state of the budget which will determine how long the program will operate this year.

In the meantime, people interested in directly participating in the program are welcome to attend its regular Thursday night meetings at 7:30pm at the Rainbow Multi-Media offices, 208 W. Liberty St. Bands wishing to perform should contact Suzanne at 769-5850.