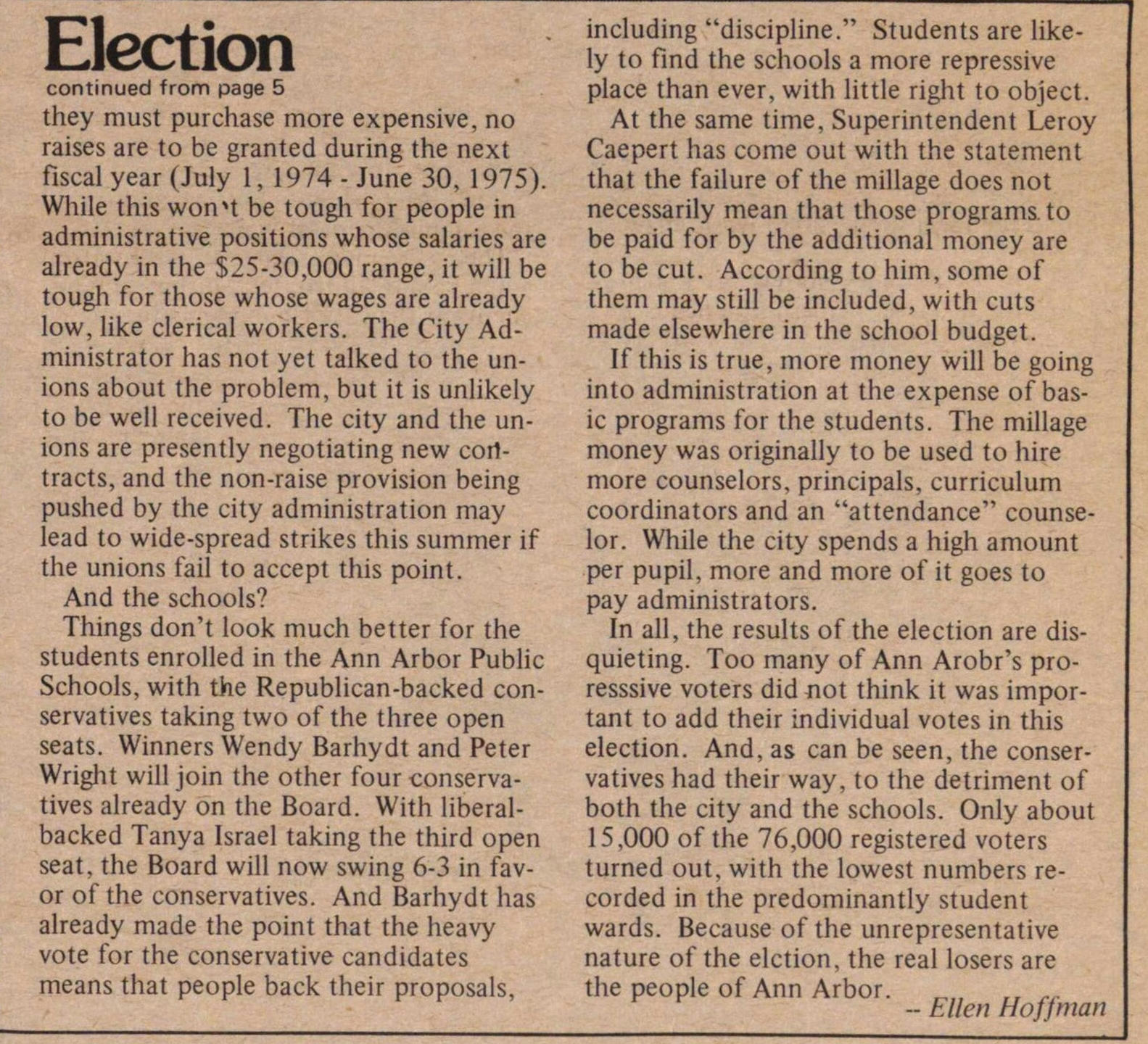 The election results are in, and they are less thartsurprising. Following predictions for a light voter turnout. with heaviest voting in the conservative wards, both tax proposals went down in stunning defeat, and two more conservatives were elected to the School Board. So what does it all mean? For the city, the defeat of the 1.7 mili property tax means "devastating" cuts in city services, according to City Administrator Sylvester Murray. The cuts previously proposed by Murray will now be put into effect, as no party on Council has the needed eight votes to make changes. When Democratie Council member Jamie Kenworthy heard of it, he mumbled. sadly, "Well, that's the end of social services, " and Council member Carol Jones even proposed a moment of silence during the Council meeting. Budgeted for cuts now that the city will not be receiving the additional revenue are all social service programs, 30 employee 's jobs, and all raises for city employees. Without city money, communky organizations will have to seek funding from other sources. This may not prove easy for all the organizations, which include childcare centers, drug programs, medical services, community centers and park programs (including the free concerts). "I think it's criminal that more money is going to pólice and none to human services," commented Michael Castleman of the Free People's Clinic, one of the agencies which received money from the city bèfore. 'it just shows the present city government does not meet human needs." Child care centers will probably be most affected by the loss of money. Many of them have depended on city funding to supplement the small amount which parentsare able to pay for child care. Without city financing, many may have to raise thek prices to parents beyond the amount which it is feasable for fhe parents to pay. There are few grants or other government sources to which the child care centers can turn to find more funds. For 30 employees, the millage faüure means a loss of jobs. The City Administrator has said that those employees laid off will be considered first for any jobs which may open up as current employees leave, but the chances of many jobs opening is small. For those employees remaining, however, the situation is not much more pleasant. Despite the high inflation rates affecting the economy, making all things continued on page 7 Election continued from page 5 they must purchase more expensive, no raises are to be granted during the next fiscal year (July 1, 1974 - June 30, 1975). While this wonn be tougli for people in administrative positions whose salaries are already in the $25-30,000 range, it will be tough for those whose wages are already Iow, like clerical workers. The City Administrator has not yet talked to the unions about the problem, but it is unlikely to be well received. The city and the unions are presently negotiating new corttracts, and the non-raise provisión being pushed by the city administraron may lead to wide-spread strikes this summer if the unions fail to accept this point. And the schools? Things don't look much better for the students enrolled in the Ann Arbor Public Schools, with the Republican-backed conservatives taking two of the three open seats. Winners Wendy Barhydt and Peter Wright will join the other four conservatives already on the Board. With liberalbacked Tanya Israel taking the third open seat, the Board will now swing 6-3 in favor of the conservatives. And Barhydt has already made the point that the heavy vote for the conservative candidates means that people back their proposals, including "discipline." Students are likely to find the schools a more repressive place than ever, with little right to object. At the same time, Superintendent Leroy Caepert has come out with the statement that the failure of the millage does not necessarily mean that those programs to be paid for by the additional money are to be cut. According to him, some of them may still be included, with cuts made elsewhere in the school budget. If this is true, more money will be going into administration at the expense of basie programs for the students. The millage money was originally to be used to hire more counselors, principáis, curriculum coördinators and an "attendance" counselor. While the city spends a high amount per pupil, more and more of it goes to pay administrators. In all, the results of the election are disquieting. Too many of Ann Arobr's proresssive voters did not think it was important to add their individual votes in this election. And, as can be seen, the conservatives had their way, to the detriment of both the city and the schools. Only about 15,000 of the 76,000 registered voters turned out, with the lowest numbers recorded in the predominantly student wards. Because of the unrepresentative nature of the elction, the real losers are the people of Ann Arbor.