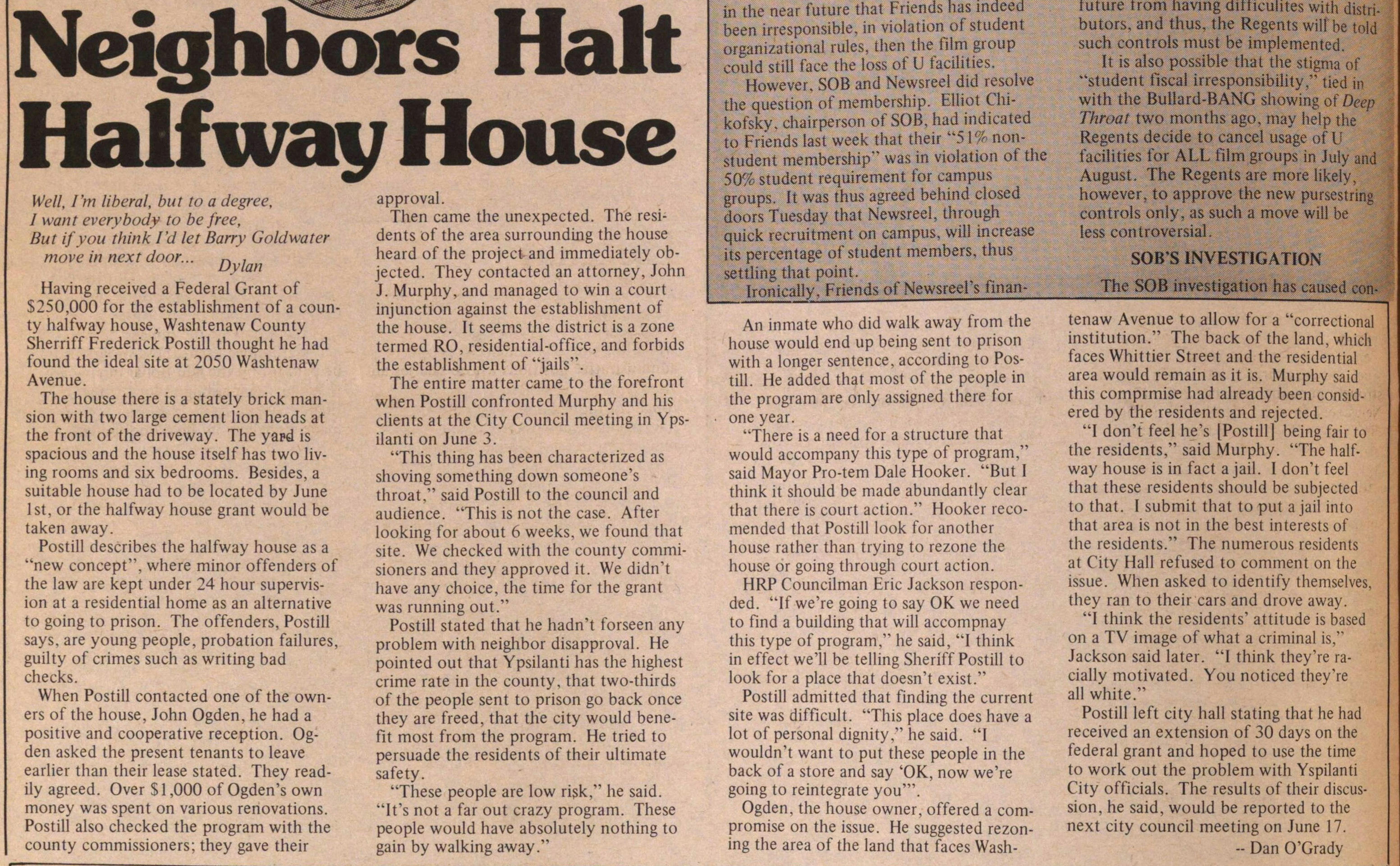 Well, I'm liberal, bui to a degree, I want everybody to be free, But ifyou rliink l'd let Barry Goldwater move in next door... „ , Dylan Having received a Federal Grant of S25O,OOO for the establishment of a county halfway house, Washtenaw County Sherriff Frederick Postill thought he had found the ideal site at 2050 Washtenaw Avenue. The house there is a stately brick mansion with two large cement lion heads at the front of the driveway. The yapd is spacious and the house itself has two living rooms and six bedrooms. Besides, a suitable house had to be located by June lst. or the halfway house grant would be taken away. Postill describes the halfway house as a "new concept", where minor offenders of the law are kept under 24 hour supervisión at a residential home as an alternative to going to prison. The offenders, Postill says. are young people, probation failures, guilty of crimes such as writing bad checks. When Postill contacted one of the owners of the house, John Ogden, he had a positive and cooperative reception. Ogden asked the present tenants to leave earlier than their lease stated. They readily agreed. Over $ 1 ,000 of Ogden's own money was spent on various renovations. Postill also checked the program with the county commissioners: they gave their approval. Then carne the unexpected. The residents of the area surrounding the house heard of the and immediately objected. They contacted an attorney, John J. Murphy, and managed to win a court injunction against the establishment of the house. It seems the district is a zone termed RO, residential-office, and forbids the establishment of "jails". The entire matter came to the forefront when Postill confronted Murphy and his clients at the City Council meeting in Ypsilanti on June 3. "This thing has been characterized as shoving something down someone's throat." said Postill to the council and audience. "This is not the case. After looking for about 6 weeks, we found that site. We checked with the county commisioners and they approved it. We didn't have any choice. the time for the grant was running out." Postill stated that he hadn't forseen any problem with neighbor disapproval. He pointed out that Ypsilanti has the highest crime rate in the county. that two-thirds of the people sent to prison go back once they are freed, that the city would benefit most from the program. He tried to persuade the residents of their ultímate safety. "These people are low risk," he said. "It's not a far out crazy program. These people would have absolutely nothing to gain by walking away." An inmate who did walk away from the house would end up being sent to prison with a longer sentence, according to Postill. He added that most of the people in the program are only assigned there for one year. "There is a need for a structure that would accompany this type of program," said Mayor Pro-tem Dale Hooker. "But I think it should be made abundantly dear that there is court action." Hooker recomended that Postill look for another house rather than trying to rezone the house or going through court action. HRP Councilman Eric Jackson responded. "If we're going to say OK we need to find a building that will accompnay this type of program," he said, "I think in effect we'll be telling Sheriff Postill to look for a place that doesn't exist." Postill admitted that finding the current site was difficult. "This place does have a lot of personal dignity ," he said. "1 wouldn't want to put these people in the back of a store and say 'OK, now we're going to reintégrate you'". Ogden, the house owner, offered a compromise on the issue. He suggested rezoning the area of the land that faces tenaw Avenue to allow for a "correctional institution." The back of the land, which faces Whittier Street and the residential area would remain as it is. Murphy said this comprmise had already been considered by the residents and rejected. "I don't feel he's IPostill] being fair to the residents," said Murphy. "The halfway house is in fact a jail. I don't feel that these residents should be subjected to that. I submit that to put a jail into that area is not in the best interests of the residents." The numerous residents at City Hall refused to comment on the issue. When asked to identify themselves, they ran to their cars and drove away. "I think the residents' attitude is based on a TV image of what a criminal is," Jackson said later. "I think they're racially motivated. You noticed they're all white." Postill left city hall stating that he had received an extensión of 30 days on the federal grant and hoped to use the time to work out the problem witli Yspilanti City officials. The results of their discussion, he said, would be reported to the next city council meeting on June 17.