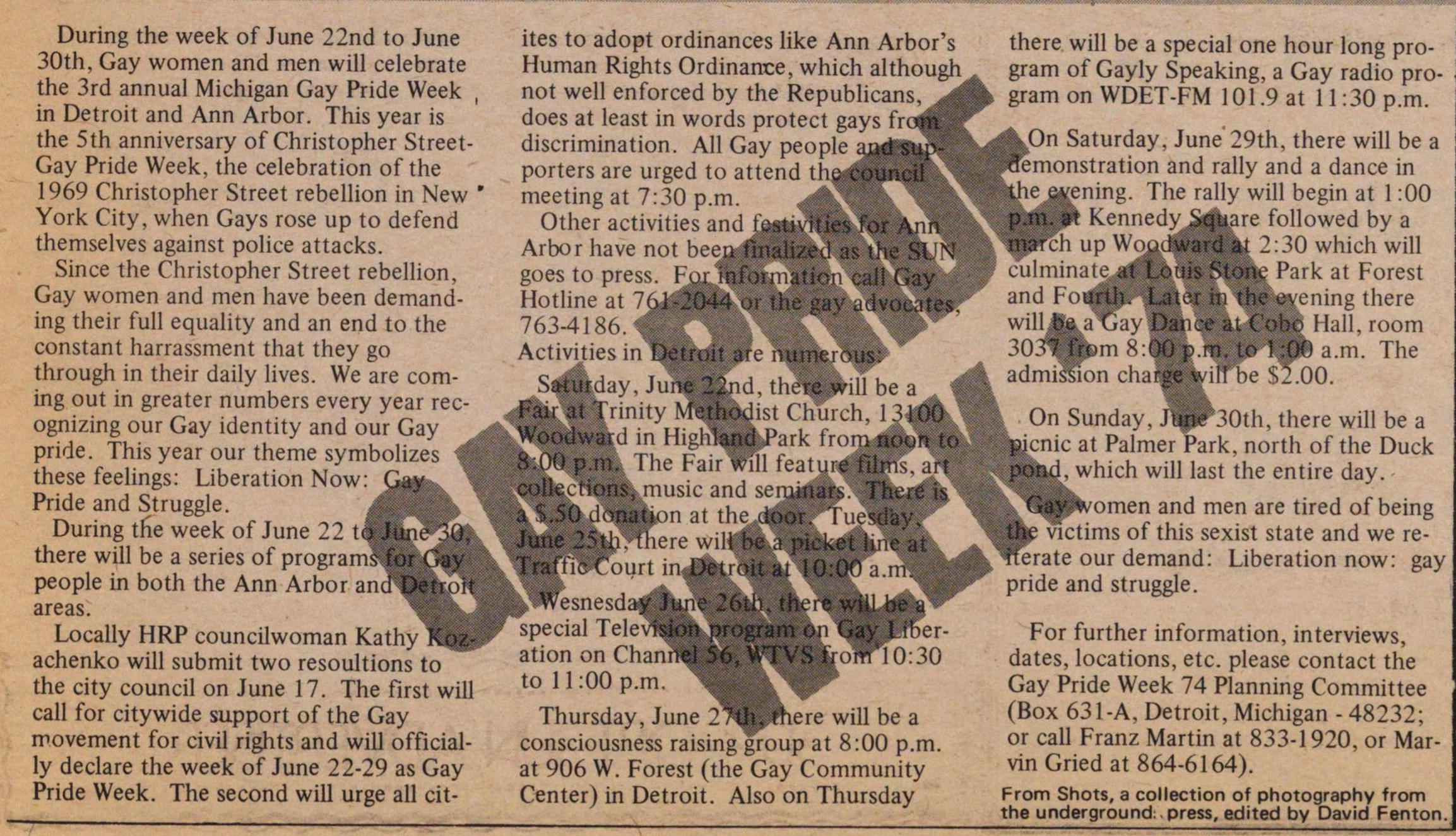 During the week of June 22nd to June 3Oth, Gay women and men will celébrate the 3rd annual Michigan Gay Pride Week in Detroit and Ann Arbor. This year is the 5th anniversary of Christopher StreetGay Pride Week, the celebration of the 1969 Christopher Street rebellion in N York City, when Gays rose up to defei themselves against pólice attacks. Since the Christopher Street rebellio Gay women and men have been demar ing their full equality and an end to th constant harrassment that they go through in their daily lives. We are coi ing out in greater numbers every year i ognizing our Gay identity and our Gay pride. This year our theme symbolizes these feelings: Liberation Now: Ggfe Pride and Struggle. During tlie week of June 22 tEuP there will be a series of programsWr Gay people in both the Ann Arbor andBkmlB areas. 8mI Locally HRP councilwoman KathyUP achenko will submit two resoultions to the city council on June 17. The first will cali for citywide support of the Gay rrovement for civil rights and will officially declare the week of June 22-29 as Gay Pride Week. The second will urge all ites to adopt ordinances iike Ann Arbor's Human Rights Ordinance, which although not well enforced by the Republicans, does at least in words protect gays frodB[ discrimination. All Gay peoplc ajad Süp- porters are urged to atteiul iIiü counc BwesnesdaáÉujie 26ük thcre yá special Tol cisión program o Broeration on ChanfH WTVS n ■ ,m U ) ;i i Thursday, June ÍbV"-' wiH tie a consciousness raising group at 8:00 p.m. at 906 W. Forest (the Gay Community Center) in Detroit. Also on Thursday there will be a special one hour long program of Gayly Speaking, a Gay radio program on WDET-FM 1 0 1 .9 at 1 1 : 30 p.m. LOn Saturday, June 29th, there will be a Wemonstration and rally and a dance in 11 begin at 1:00 followed by a :30 whichwill Park at Forest peiling there JU Hall, room BB a.m. The $2.00. , there will be a rth of the Duck entire day. re tired of being state and we hiérate our demand: Liberation now: gay pride and struggle. For further information, interviews, dates, locations, etc. please contact the Gay Pride Week 74 Planning Committee (Box 631-A, Detroit, Michigan - 48232; or cali Franz Martin at 833-1920, or Marvin Gried at 864-6164).